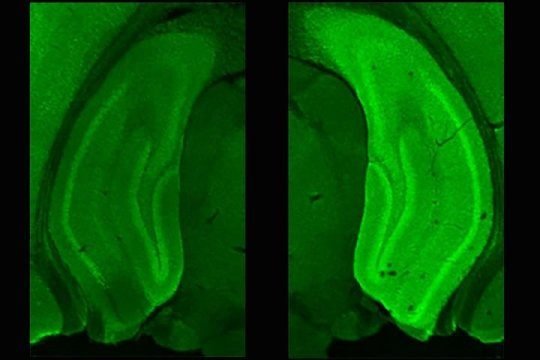 Entering an unfamiliar place provides the chance to make a new memory. A new study at MIT’s Picower Institute for Learning and Memory shows how two proteins spring into action to ensure that a memory is encoded within minutes.

While neuroscientists have known for a long time that new proteins have to be made for new memories to be formed, “We still had several layers of questions,” said Weifeng Xu, assistant professor in the Department of Brain and Cognitive Sciences and senior author of the new paper in the Proceedings of the National Academy of Sciences. “How fast is protein synthesis required for memory encoding? What targets, or protein syntheses correlate with the encoding process? And are those targets required for the encoding?”

To find out, Xu’s team, including lead author and Picower Institute research scientist Kendrick Jones, conducted experiments in mice in a memory-making region called the hippocampus. The proteins that they found quickly team up, neurogranin and FMRP, are also present in humans.

In fact, abnormalities in both proteins have been associated with human neuropsychiatric and neurodevelopmental disorders — FMRP stands for “Fragile X Mental Retardation protein” because it is central to the genetic, autism-like condition Fragile X syndrome; and prior studies have linked neurogranin to schizophrenia and intellectual disability. The new study therefore not only provides insights into how the brain remembers new places, but also provides new hints about how problems involving these two proteins in other parts of the brain, such as the frontal cortex, could undermine cognition in those diseases.

The protein making associated with new memory formation occurs at sites called synapses where neurons connect in circuits with other neurons. This can be driven by neural activity triggered by specific events, such as encountering a novel place.

Xu’s team tested the timeframe on which novel context memory occurs by using a drug to temporarily interrupt neural protein-making at four different time points when introducing mice to a new space. Based on results from testing the memories of the mice the next day, the researchers found that if they administered the drug 30 minutes before or exactly at the moment of introducing mice to the new space, they could prevent memory formation, but administering the drug immediately after or shortly after the context exposure had no effect on memory formation. Given that short time window and accounting for the time it takes the drug to become active in the brain, the first new protein synthesis required for context memory formation has a rapid onset, and is transient, Xu said.

The next question was which protein appeared to be synthesized in this rapid and fleeting process. By looking at the hippocampus of mice that were recently placed in a novel setting to those that had not been, the scientists were able to examine differences in the abundance of mRNA (molecules that specify how to make proteins) of 28 plausible candidates. Only neurogranin showed a marked increase of mRNA in the protein-making machinery, or ribosomes, of the mice who were exposed to a new place.

While neurogranin-making rose upon exposure to new places, was that necessary for forming a memory of them? To find out the team took a close look at the mRNA’s structure and fashioned a molecule to specifically block its activity. Introducing that molecule into the hippocampus, they found, prevented neurogranin-making and memory formation. Moreover, in mice where neurogranin-making had been hindered, adding back in neurogranin restored memory encoding. Together those results convinced the researchers that neurogranin must be there in abundance for memory of a novel place to take shape.

Then the researchers probed the nature of neurogranin’s translational regulation, and identified FMRP as an interaction partner of the neurogranin messenger RNA, using an unbiased screen. By knocking out the FMRP gene they could observe that without it, mice didn’t make extra neurogranin when exposed to new places and didn’t form a memory. Given the general abundance of neurogranin mRNA in the hippocampus, Xu hypothesizes that FMRP and potentially another protein from the same family, FXR2P, regulate the translation of neurogranin mRNAs in the ribosome, On the signal of novel context, the complex lets neurogranin be made at a higher rate, Xu speculated, almost as if neurogranin mRNA is staged for rapid action on cue.

“We really are at the early stage of understanding why it is so fast,” she said. “It could be that the ribosome is already loaded with the mRNA also with FMRP and FXR2P complex. Novel experience exposure may enhance the rate of synthesis somehow.”

The JPB Foundation, the Whitehall Foundation and the Stanley Center at the Broad Institute supported the research.