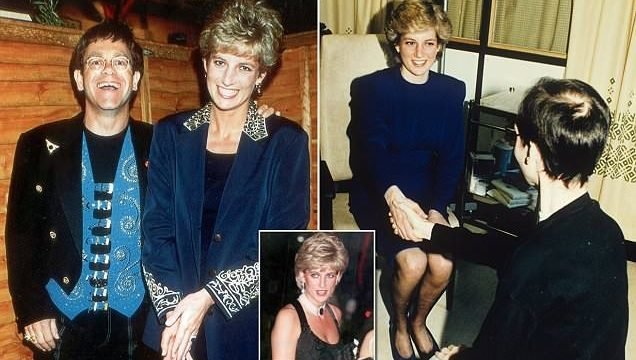 ‘One gesture showed the world the desperate need for humanity’: Sir Elton John praises Princess Diana for shaking hands with a gay man dying of AIDS when a diagnosis was a ‘death sentence’

Sir Elton John has praised his late friend Princess Diana for shaking hands with a gay man dying of AIDS.

Speaking at a Princess of Wales memorial lecture today at the French Institute, London, the Candle in the Wind singer claimed the People’s Princess’ ‘compassion’ caused her to ‘calmly shake hands with a gay man who was dying of AIDS when a diagnosis was a death sentence’.

Back in 1987, when HIV stigma was rife, photographs of the Princess’ gesture showed ‘an act of kindness that I know to be typical’.

Sir Elton, who established the eponymous AIDS Foundation, added: ‘One simple handshake, one gesture showed the world the desperate need for humanity for people living with AIDS.

‘She knew the disease could not be communicated by hand. Her gesture meant nobody should be left behind. She did not distinguish between “us” and “them.”’

Princess Diana was famously the first member of the Royal Family to touch someone with AIDS. It is unclear if this picture is the first time she made physical contact with an HIV patient. In 1987, Princess Diana shook hands with an unnamed male AIDS patient while opening the UK’s first unit dedicated to treating people with HIV and AIDS at London Middlesex Hospital Elton John, who was friends with the Princess, said her ‘kind’ and ‘calm’ gesture showed the world ‘the desperate need for humanity for people living with AIDS’ Princess Diana, pictured at a gala for the European Organisation for the Research and Treatment of Cancer, showed ‘an act of kindness I know to be typical’, according to Sir Elton In April 1987, Princess Diana shook hands with a gay man dying of AIDS.

The People’s Princess touched the unnamed man without wearing gloves, challenging the previously believed notion the disease could be passed via skin-to-skin contact.

She was quoted as saying: ‘HIV does not make people dangerous to know.

‘You can shake their hands and give them a hug. Heaven knows they need it’.

At the time, Princess Diana was opening the UK’s first unit that exclusively cared for HIV/AIDS patients at London Middlesex Hospital.

Princess Diana was famously the first member of the Royal Family to touch someone with AIDS.

It is unclear if this picture is the first time she made physical contact with an HIV-infected patient.

The People’s Princess would also regularly visit the Lighthouse, both with the media present and without.

According to Dr Rosemary Gillespie, chief executive of the HIV charity Terrence Higgins Trust: ‘London Lighthouse offered residential and day care for men, women and children living with HIV and AIDS, and provided a refuge and respite to people marginalised and abandoned because of their diagnosis’.

Princess Diana was a patron of the National AIDS Trust at the time time of her death in 1997.

‘Waves of progress washed out from Diana’s gesture’

Speaking of how HIV and AIDS research has come on, Sir Elton said: ‘We now have the power and the technology to do good at a greater scale than ever before and we must seize that opportunity.

‘Diana would expect no less. I like to think she would be proud and astonished if she could see the progress that has been made since she left us.

‘The waves of progress that washed out from Diana’s famous gesture have been incredible.

Sir Elton then reminisced on a time he visited London Lighthouse nearly a year ago with Prince Harry.

According to Dr Rosemary Gillespie, chief executive of the HIV charity Terrence Higgins Trust: ‘London Lighthouse offered residential and day care for men, women and children living with HIV and AIDS, and provided a refuge and respite to people marginalised and abandoned because of their diagnosis’.

Sir Elton said the Lighthouse, which Princess Diana visited regularly, was the ‘sole beacon of hope at the height of the AIDS crisis’.

Speaking of the Lighthouse’s closure for HIV/AIDS patients in 2015, Sir Elton added: ‘The hospice equipment is gone and the building serves a completely different purpose.

‘Only the plaques of remembrance in the garden tell the story. It is the story of how far we have come.’ WHAT CHARITIES DID PRINCESS DIANA SUPPORT?

Princess Diana was president or patron of more than 100 countries as part of her royal duties.

Much of her work involved assisting children, HIV/AIDS patients, and homeless and disabled people.

After 1996, Princess Diana worked as either patron or president for:

In the year before she died in 1997, Princess Diana campaigned to ban the production and use of landmines.

She made many visits overseas to visit hospices, schools, charities and fundraising events.

‘In places where prejudice thrives, so does HIV’

Despite his optimism, Sir Elton added: ‘HIV prevention activity has been subject to savage cuts.

‘That is because it is funded through local authorities rather than through the NHS.

‘There is an estimated $7 billion gap in the funding needed to contain the global epidemic.’

PrEP is for people at a high risk of HIV infection, such as those with an affected partner. The US drug-approving body Food and Drug Administration granted a licence for the drug in 2012.

Sir Elton said: ‘PrEP, with its proven protective power, needs to be expanded.

‘New infections are surging in Scotland among people who use drugs, and the situation urgently needs funds.

‘In places where prejudice thrives, so does HIV.’ WHAT IS PrEP? THE HIV PREVENTION DRUG THAT STOPS 90 PERCENT OF TRANSMISSION

This drug in particular is fixed-dose combination of two anti-retroviral drugs, tenofovir and FTC, in one pill.

They work together to interfere with an enzyme which HIV uses to infect new cells, slowing down the virus’s attack or preventing it altogether.

The drug is designed for people that have not yet been exposed to the virus to protect themselves against it.

Alternatively, people who have been exposed can take PEP (post-exposure prophylaxis), a month-long course of drugs started within 72 hours of exposure.

According to the Tiny Dancer hitmaker, HIV infections in London have decreased by 40 per cent every year since 2016, with the capital city being ‘on a fast track to containing, even eliminating, its HIV epidemic’.

Yet health officials revealed last November AIDS rates in the rest of Europe are growing at an ‘alarming pace’, with infections reaching their highest level in 2016 since records began.

Around 160,000 people contracted HIV in 53 European countries in 2016, according to a 2017 report by the World Health Organization (WHO) and the European Centre for Disease Prevention and Control.

According to the report, this increase was ‘mainly driven by the continuing upward trend in the East’, which accounts for around 80 per cent of Europe’s cases.

Zsuzsanna Jakab, European regional director of the WHO, said: ‘This is the highest number of cases recorded in one year. If this trend persists, we will not be able to achieve the target of ending the HIV epidemic by 2030.’

Past findings suggest HIV rates are rising in eastern Europe, particularly in those over 50 who inject illegal drugs, due to a lack of awareness campaigns on the infection’s risks or how to prevent transmission.