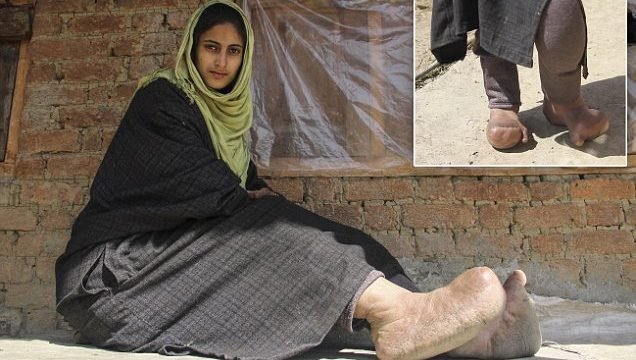 Woman who has NEVER worn shoes: 21-year-old has endured years of bullying over her condition which has caused her feet to swell to the size of footballs

A young woman in India has feet so large that she has never been able to wear shoes and had to drop out of school because she was bullied so much.

Tawheeda Jan, 21, has elephantiasis – a parasitic infection which has made her feet swell so much she had to have her toes amputated as a teenager.

But after years of unsuccessful treatment, Ms Jan still suffers from the condition and says her only wish is to be able to wear shoes like her friends.

From a remote village called Soi-Pathri, in the Kashmir region of India, Ms Jan has to stay indoors during winter because there can be up to ten feet of snow.

Ms Jan said: ‘All my life I have been deprived of the joy of wearing shoes.

‘Whether it is winter or summer, I have only walked barefoot. My feet are too large to fit in any slipper or sandals.’ 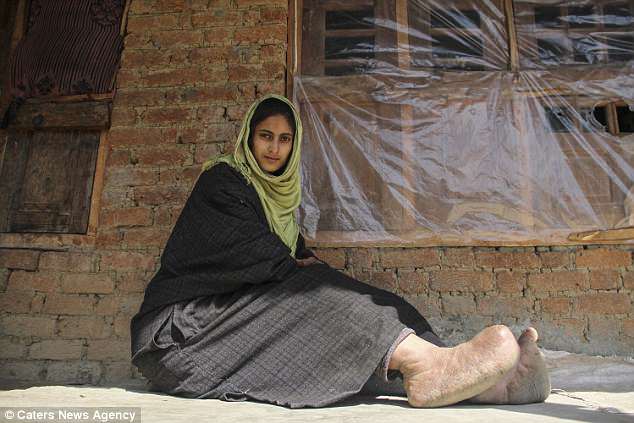 Tawheeda Jan, 21, has suffered from elephantiasis in her feet for her whole life

Elephantiasis – also known as lymphatic filariasis – is caused by a parasitic infection spread by mosquitoes.

It affects millions of people worldwide, though many do not get symptoms, and can lead to serious disfigurement.

Parts of the body – often the legs or genitals – become enlarged when parasitic worms nest in the lymphatic system, which regulates fluid balance in the body.

The parasites’ nesting in the body can cause body tissue to thicken, a problem which worsens over time.

Ms Jan’s feet are over 11 inches long and seven inches wide; their size is compared to footballs.

Walking is especially difficult because masses of thickened tissue have made her feet so heavy.

Her feet were swollen when she was born, her father says, and they were bigger than those of an adult by the time she was a toddler. 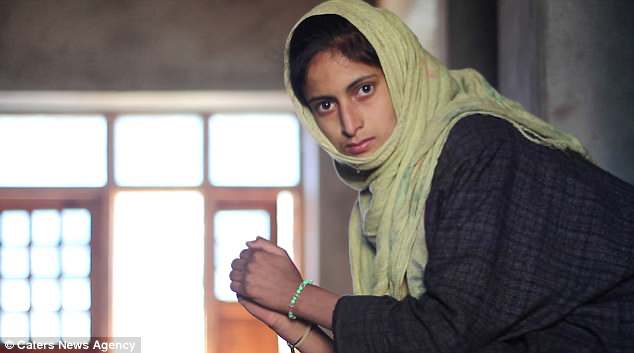 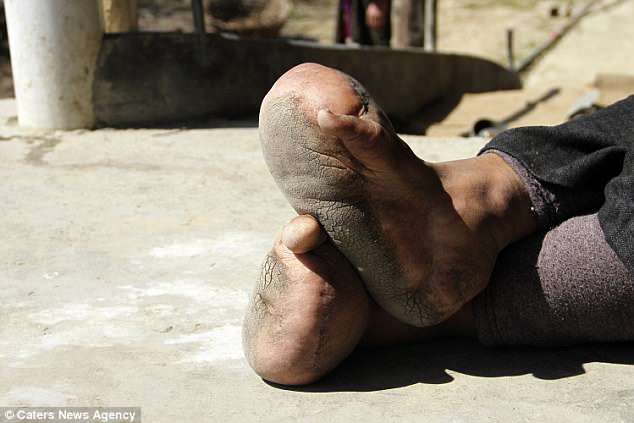 Ms Jan’s swollen feet mean she has never been able to wear shoes, because the family can’t find any to fit her

‘Tawheeda was born with swollen feet’

Despite an operation to remove her toes when she was 14 – which it was hoped would stop them growing – the condition has spread to her legs.

Ms Jan’s father, Hamid Wagay, who works as a farmer, said: ‘Unlike my other five children, Tawheeda was born with swollen feet.

‘Her abnormality became a curse for her as she was not able to wear shoes or sandals like other children.

‘She had to walk barefoot even in the minus temperatures. 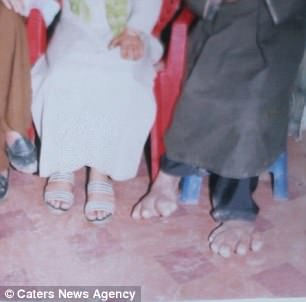 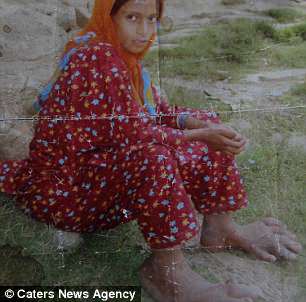 ‘During summers she could walk and roam around easily but in winters, her feet would develop cracks forcing her to stay indoors.’

Since the family cannot find the right size of shoes or sandals for Ms Jan in the market, she is forced to walk everywhere barefoot.

Mr Wagay said: ‘Her toes were cut off during the operation which stopped her feet from growing but her legs started ballooning.

‘The operation developed a more serious concern for her as she would hardly walk now.’ 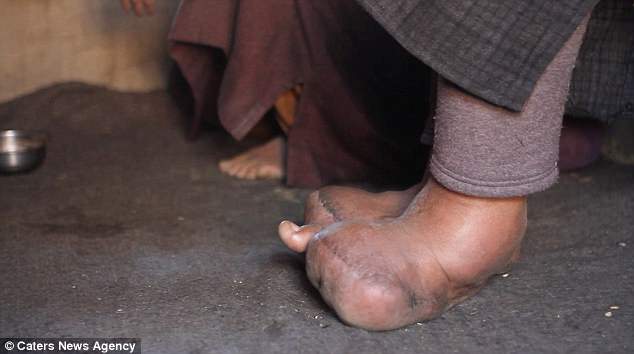 Ms Jan, now 21, had an operation to remove her toes when she was 14 in a bid to stop her feet from growing any larger, but the condition spread to her legs and made it even more difficult to walk

Because of the unusual condition, Ms Jan faced a lot of trouble dealing with her peers in school.

From name calling to making fun of her ‘big feet’, she was subjected to regular humiliation and had to quit her studies.

The disease can be eradicated

Lymphatic filariasis is considered to be a neglected tropical disease by the World Health Organization, which estimates it costs affected countries $1bn a year.

The condition can be controlled with adequate healthcare and Egypt became the latest country to eradicate the disease in March this year. 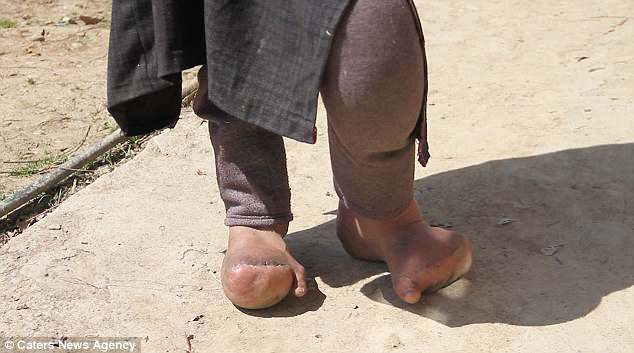 Ms Jan has to walk barefoot all the time – even in winter when there can be ten feet of snow in her village of Soi-Pathri, northern India 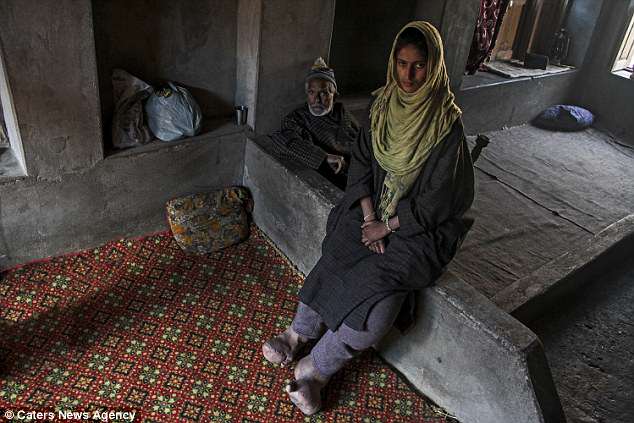 Ms Jan dropped out of school because she was bullied so much about her feet at school – 120 million people worldwide are thought to have elephantiasis, even though it can be prevented with medicine

Around 120 million people are thought to have the disease worldwide.

One 46 year-old Indian man, known only as Saidalavi, had a 13.6kg mass removed from his leg earlier this year after contracting the disease from a mosquito bite as a teenager.

The condition left him bedridden for two years, with surgeons only intervening when the huge lump became infected.

After a month of antibiotics, five doctors cut off the 30lb (13.6kg) mass during a five-hour operation at Amrita Institute of Medical Sciences in Kochi in India.

One month on, Saidalavi managed to walk again this week, but is expected to go under the knife again later this year before he can hope to live a normal life.

Elephantiasis is defined as an impaired lymphatic system, resulting in abnormal enlargements of the body due to by a parasite infection from a mosquito bite.

Nearly 856 million people in 52 countries worldwide are at risk of developing elephantiasis, which is also known as lymphatic filariasis.

In 2000 over 120 million people were infected, of which around 40 million were disfigured and incapacitated by the disease.

This can result in tissue or scrotal swelling, as well as tissue thickening, in later life, leading to permanent disability and social isolation.

Elephantiasis is caused by adult parasitic worms lodging in the lymphatic system. Their larvae then further add to this problem.

Preventative chemotherapy can stop the spread of the infection by reducing the number of parasites in infected people’s bloodstreams.

Scrotal swelling is treatable via surgery.

Elephantiasis can be stopped from becoming worse by practicing good hygiene, exercising and elevating affected limbs.