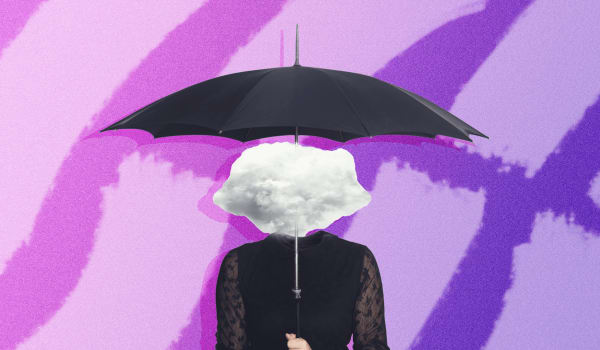 We’ve all had the unpleasant experience of totally zoning out during an important meeting or suddenly struggling to articulate a point that we’ve made dozens of times in the past. For many people, this is an infrequent occurrence, and once the frustrating or embarrassing moment has passed, it’s quickly forgotten. But if you find yourself feeling “foggy” quite often, you’re probably experiencing brain fog.

Although it’s not a medical term, brain fog is real, and it can interfere with your ability to function. The hallmark characteristics of brain fog are trouble concentrating, feeling forgetful and a general struggle to think clearly.

“Sometimes, it’s brief and fleeting or it can be continuous,” behavioral neurologist Dr. Mary Ellen Quiceno tells SheKnows. “Generally, people can still function in their daily activities, but believe that they are not performing at their best.”

“Our brain makes up only 2 percent of our body weight but consumes 20 percent of our total energy,” ER doctor Dr. Darria Long Gillespie tells SheKnows. “So a problem anywhere else in the body is often reflected in a feeling of diminished brain functioning, or brain fog.”

Gillespie says the best way to deal with brain fog is to find its primary cause. For example, if an autoimmune illness or diabetes is the most likely culprit for the fogginess, the focus should be to treat those conditions.

A common cause of brain fog is stress — after all, according to a 2017 Gallup poll, 80 percent of Americans report feeling stressed either frequently or sometimes. If chronic stress is making you feel foggy, Gillespie suggests “starting mindfulness exercises, simple breathing exercises to lower your stress in the moment or exercising for five to 10 minutes a day.” She also emphasizes the importance of sleeping for seven to nine hours each night because, as most of us have learned the hard way, nothing functions well when we’re tired. “Exercise and mindfulness breathing exercises also help you sleep, giving you a double benefit,” Gillespie adds.

Aideen Turner, a physical therapist, is also a major proponent of using exercise to combat brain fog. “Research has now established the effects of exercise on our cognition. Exercise increases the blood supply or ‘food’ to our brain. This changes the brain from the molecular to behavioral level in ways that protect our memory and thinking skills,” Turner tells SheKnows.

Dealing with the underlying cause of brain fog, whether it’s by treating a physical illness or establishing healthier sleep and exercise patterns, should mitigate the symptoms or make it go away entirely. But if your brain fog persists or the symptoms suddenly become severe with no explanation, Gillespie says it’s time to speak with your doctor.

Most often, brain fog is a sign that you should focus on self-care. We live in a culture in which unhealthy habits like sleeping fours a night, being the busiest and most stressed out person in the room and never taking a sick day are praised and even glamorized. Instead, we’d all be better off extolling the virtues of a full night of sleep (because, let’s be honest — sleep is glorious), having a healthy work-life balance and prioritizing treatment of physical health problems. After all, feeling foggy all the time is neither glamorous nor desirable.