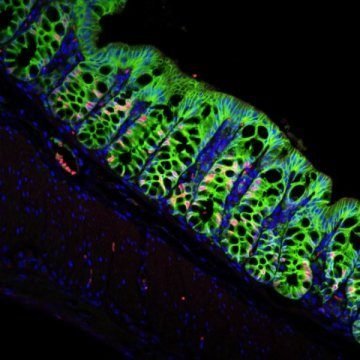 The human intestine constantly renews itself. Alone in the colon — the last 1.5 meters of the gastrointestinal tract — 10 billion epithelial cells are replaced each day. The intestinal epithelium is the layer of cells that forms the lining of both the small and large intestine and is responsible for absorbing nutrients. The regeneration process is driven by stem cells that are found in small folds of the epithelium (crypts), where they are in contact with other cells that produce the signals needed to drive regeneration. The key activating signal that sustains the stem cells is called “Wnt.”

A group of UZH researchers, including Konrad Basler from the Institute of Molecular Life Sciences, have now discovered the cells responsible for providing the activating signal to the stem cells. These so-called Gli1-positive cells surround the crypts in the epithelium and thereby form the stem-cell niche. The scientists performed studies in mice to demonstrate that these cells play an essential role in forming and repairing the intestinal epithelium. “If the Gli1-positive cells are eliminated or unable to secrete Wnt proteins, the activation signal is lost. Consequently the colon’s stem cells as well as the epithelium will perish, and the organism dies,” says Basler.

Just how critical a well-balanced regulation of the intestinal epithelium is also becomes evident when stem cells are driven to constantly divide. If Wnt signaling is stimulated excessively, the stem cells divide in an uncontrolled manner. “Mice with mutations in the Wnt signaling pathways develop polyps, from which colon cancer later develops,” adds the molecular biologist. This is also the case for humans.

In further tests, the researchers examined the behavior of the cells in the stem-cell niche in response to inflammation of the colon. In this situation, many more epithelial cells are lost than in healthy animals. The need for new cells is therefore greater, since the tissue not only has to be maintained but also repaired. The researchers observed that the amount of Gli1-positive cells increased significantly in response to an inflamed colon. “The cells we’ve discovered are thus not only essential for healthy organisms, but are also essential when it comes to repairing a damaged intestinal epithelium,” says Basler. The discovery and description of the colon’s stem-cell niche therefore has relevance for a whole string of intestinal diseases, from inflammation to cancer.