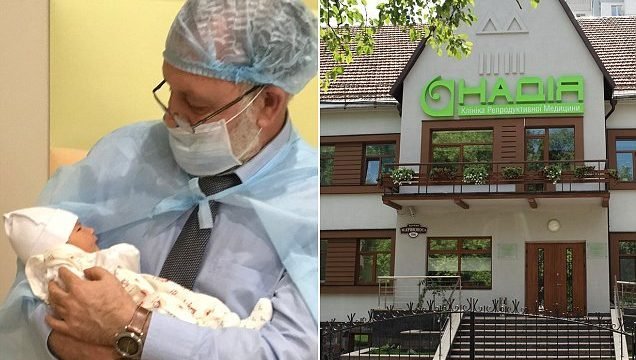 A clinic in Ukraine is doing the seemingly impossible and using the DNA of three different people to create babies.

Valery Zukin, director of the Nadiya Clinic, in Kiev, says the process has helped several women, who have been infertile for years, finally conceive by inserting the parents’ DNA into the egg of a donor.

Zukin told NPR in the first ever inside look at the clinic that, so far, four children have been produced this way and three women are currently pregnant.

Additionally, he says that several women from around the world, including Brazil and Israel, are going through the process.

However, the clinic’s work is contentious and many geneticists and ethicists worry the procedure could result in new, inheritable diseases or that it could lead to ‘designer babies’ – parents who want to genetically modify their future children. 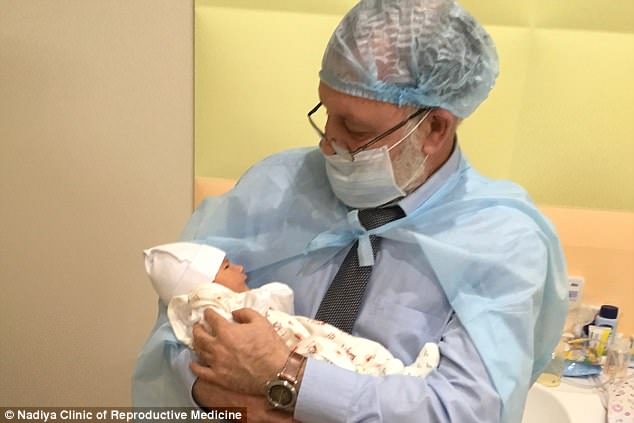 The Nadiya Clinic in Kiev, Ukraine, is performing a procedure where the DNA of three people is being used to create babies for couples that have been struggling with infertility. Pictured: clinic director Valery Zukin holding a baby girl born via this procedure in January 2017 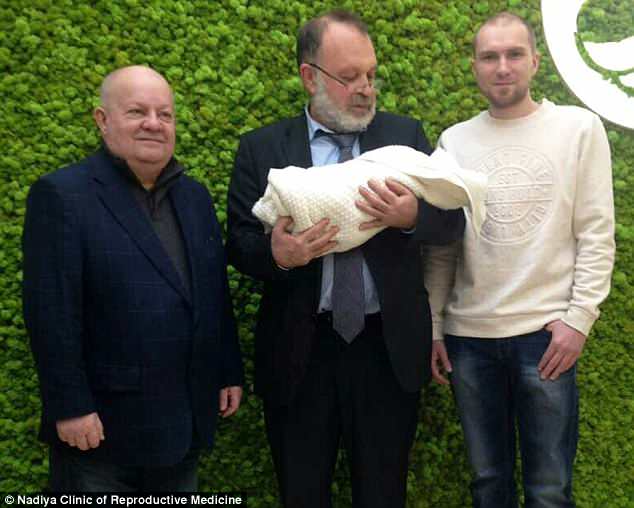 Clinic director Valery Zukin (pictured, center, holding baby girl conceived via this procedure) said that, so far, four children have been produced this way and three women are pregnant in January 2017 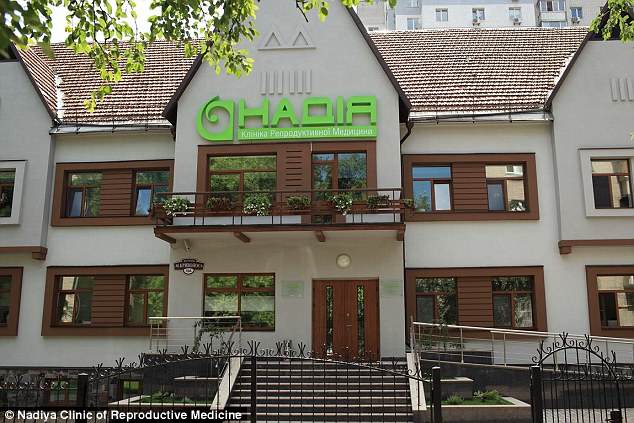 Geneticists and ethicists worry the procedure could lead to ‘designer babies’ – parents who want to genetically modify their future children. Pictured: Nadiya clinic

The procedure starts with fertilizing the egg of the woman with the sperm of her male partner to create an embryo.

Then the egg of another woman, who was paid to donate her eggs, is fertilized with the same man’s sperm to create a second embryo.

Both embryos are put under a microscope and, from there, the scientists have 15 minutes to complete the process without risking damage.

HOW THEY CREATED A THREE-PERSON BABY

The technique could be used for anything – from avoiding disease to altering a baby’s appearance. For now, disease is the focus.

The world’s first ‘three-parent’ baby was created to prevent him inheriting a genetic condition his mother carries in her mitochondria.

The disease – Leigh’s syndrome – would have killed him within a few years.

Damaged mitochondria can also prevent a woman from getting pregnant in the first place.

HOW IS THE PROCEDURE DONE?

Carefully, a small glass needle is inserted into the fertilized egg of the mother and her male partner.

The scientists extract the future parents’ DNA and then they do the same thing with the fertilized egg from the female donor.

All that is left behind in the second egg is something known as mitochondrial DNA.

Mitochondria known as the ‘powerhouse of the cell’ is like a battery that provides energy to the cells.

Most DNA is found within the nucleus, or center, of a cell, but less than one percent is found in the mitochondria, which is passed from mother to child through the egg.

However, if the mother has damaged mitochondria, she could pass rare but serious, mitochondrial diseases that could cause muscle weakness, vision and/or hearing loss, and organ failure.

In other cases, damaged mitochondria could be what is preventing a woman from getting pregnant.

However, the procedure allows the damaged mitochondria to be replaced with the healthy mitochondria of the donor.

So the DNA of the couple trying to have a baby is transferred to the donor embryo.

Once this process is complete, scientists at the Nadiya clinic will transfer the embryos carrying the DNA of three people into the womb of the woman who wants to get pregnant.

In total, 21 women have undergone this procedure. The clinic says 14 transfers were unsuccessful likely due to the age of the women trying to get pregnant.

The women who have had babies or are pregnant are younger but were unable to produce viable embryos, according to clinic staffers. Dr John Zhang of the New Hope Fertility Clinic in New York came under fire from the FDA for promoting the procedure (Pictured, Zhang holding the world’s first ‘three-person’ baby after the boy was born in Mexico in April 2016)

Zukin has helped form a company, Darwin Life-Nadiya, with a New York clinic to market the service to American women who want to travel to Ukraine to try the procedure.

He made headlines in 2016 after he delivered a baby that was conceived via this three-parent process.

The mother of the baby, who was born in April 2016, had Leigh syndrome, a genetic disorder affecting the nervous system, which she didn’t want to pass down through her own mitochondrial DNA.

The procedure is banned in the US but, because Dr Zhang performed part of the procedure in Mexico, he did not face any criminal charges but was told to stop promoting it.

The FDA reprimanded Dr Zhang last August, saying he was continuing to market the procedure, particularly as ‘the first proven treatment for certain genetic disorders’.

Marcy Darnovsky, head of the Center for Genetics and Society, a US-based watchdog group, told NPR that she fears a slight mistake could result in creating a new, inheritable disease. 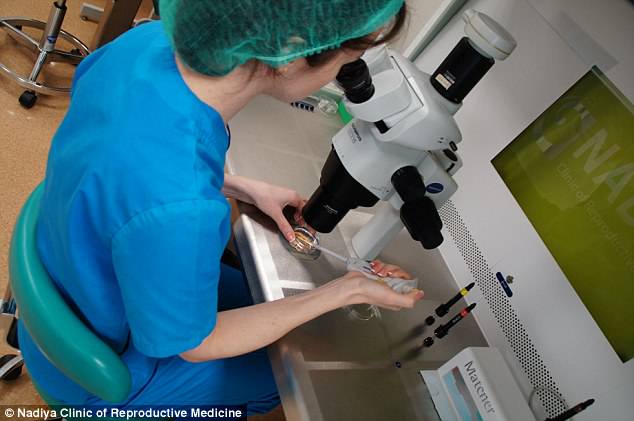 It’s a very expensive procedure, costing women in the Ukraine around $8,000 while foreigners pay close to $15,000. Pictured: a scientist at work in the Nadiya clinic 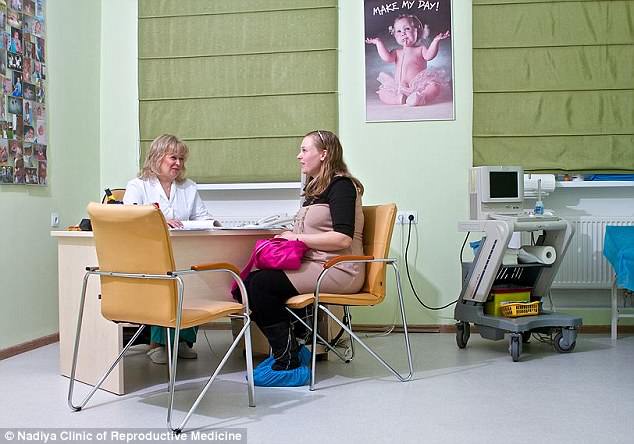 In total, 21 women have undergone this procedure. The clinic says 14 transfers were unsuccessful likely due to the age of the women trying to get pregnant. Pictured: two women inside the clinic 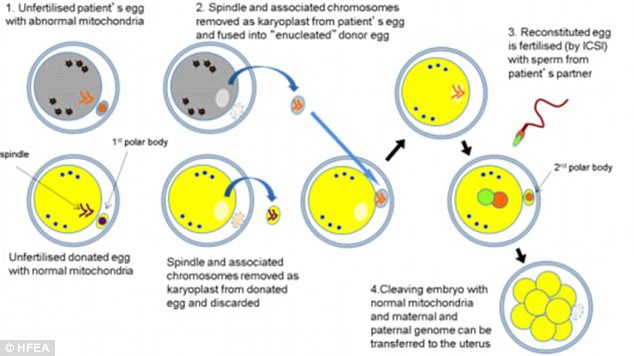 She is also worried the procedure could lead to parents who want to genetically modify their children for other reasons.

‘What we’re seeing is a fast slide down a very slippery slope toward designer babies,’ Darnovsky said.

‘We could see parents feeling eager to give their children traits like greater strength, needs less sleep. Some people are saying that: “Yes, there are genes for IQ and we could have smarter babies”.’