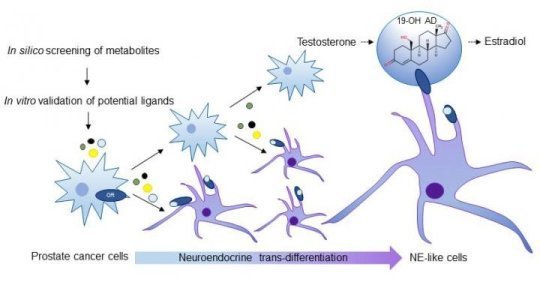 When scientists first described the receptors responsible for our sense of smell, they naturally assumed that these chemical sensors resided exclusively in the lining of our noses.

But then olfactory receptors started turning up in the strangest places — the lungs, liver, skin, heart, testes and intestines. Nearly a quarter of a century later, researchers are still wondering what these receptors are doing in such disparate locations.

The finding suggests that taking the opposite approach — blocking the receptor with specific molecules, or perhaps even with specific scents — could provide a new way to treat prostate cancer.

“When you smell a specific odor, the molecules you inhale go into your bloodstream. So one day, we may be able to use an odorant to cure prostate cancer — though it’s not possible yet,” said Hiroaki Matsunami, Ph.D., senior author of the study and professor of molecular genetics and microbiology at Duke University School of Medicine. The research is published May 28 in Frontiers in Oncology — Genitourinary Oncology.

Olfactory receptors belong to a family of proteins called G protein-coupled receptors or GPCRs, which are the most commonly exploited drug target in modern medicine. These receptors act by a lock and key mechanism. When the right molecular “key” fits into the receptor’s “lock,” it sets off a cascade of biochemical reactions that culminate in a specific biological activity, such as the brain recognizing the scent of freshly cut grass.

Thus far, Matsunami’s lab has identified the molecular keys or “ligands” that activate more than 50 different olfactory receptors, most involved in smell and other senses.

But Tatjana Abaffy, Ph.D., a research assistant professor working with Matsunami, was interested in olfactory receptors that are present outside the nose. She found repeated mentions in the scientific literature of a receptor called OR51E2 present in such unusually high levels in prostate cancer cells that it earned the alternate moniker Prostate-Specific G Protein-Coupled Receptor (PSGR).

To find the ligands that bind OR51E2 — the first step to figuring out what role it might play in prostate cancer cells — Abaffy made a virtual model of the olfactory receptor. She then trained a computer to screen a library of 2,516 different human metabolites and pick out the ones most likely to unlock the virtual receptor. Abaffy took the top 100 most promising candidates from that virtual screen and added them to living cells to see which ones activated the receptor.

A couple dozen ligands, including a steroid called 19-hydroxyandrostenedione or 19 OH-AD, caused the cancer cells to take on the characteristics of neuroendocrine cells. Most deaths from prostate cancer are due to the progression of localized disease into metastatic, castration-resistant prostate cancer, which is characterized by an increased number of these neuroendocrine-like cells.

“The typical therapy for patients with prostate cancer involves eliminating cancer-fueling hormones like testosterone by chemical or surgical castration,” said Abaffy, who is lead author of the study. “This approach slows down the cancer, but resistance typically develops after a year or two, resulting in castration-resistant prostate cancer. We believe the olfactory receptor is involved at this stage of the disease.”

Abaffy also found that cancer cells secrete 19 OH-AD, which acts as a critical intermediate in the chemical conversion of testosterone into estrogen, essentially feeding their own progression. But when she eliminated the olfactory receptor from the cells, 19 OH-AD lost its effect, and the progression stalled.

“By identifying molecules that can activate or block this receptor, we could change the course of prostate cancer,” Matsunami said.

With that goal in mind, the researchers are currently conducting follow-up experiments with the other compounds uncovered in this study.