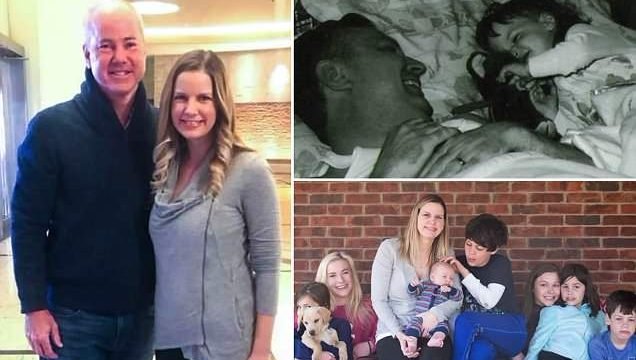 The 32-year-old had been put up for adoption as a baby and, although she had later met her biological mother, she had no idea who her biological father was.

Her family had been telling her that his was a way that she could finally find out.

However, Meyerott was worried that she wouldn’t be able to find him and that – worse yet – if she did, that he would not want a relationship with her.

Finally, the photographer from St Louis, Missouri sent a sample of her saliva in to Ancestry DNA to see what family connections she could dig up.

Within weeks, Meyerott found her biological father living 500 miles away in Tennessee – who had no idea he had a daughter. 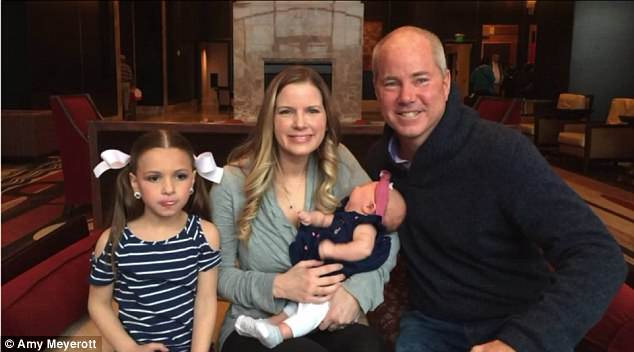 Amy Meyerott, 32 (center), from St Louis, Missouri, met her father, Tim Berrigan (right), from Kingsport, Tennessee, who never knew he had a daughter, after she did a mail-order DNA test 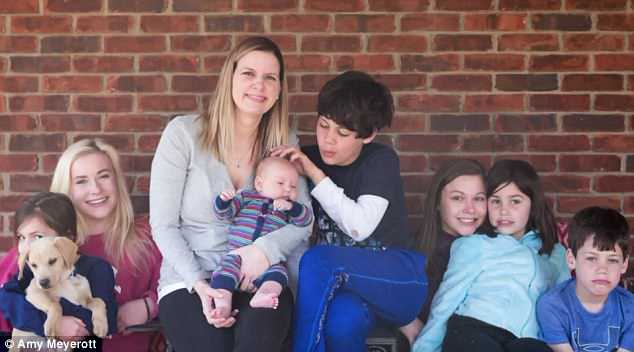 Meyerott took the AncestryDNA test, which takes a saliva sample and looks at more than 700,000 different ‘markers’ in the DNA to create a profile for each user (Pictured, Amy, third from the right, with her children, half-siblings and step-siblings) 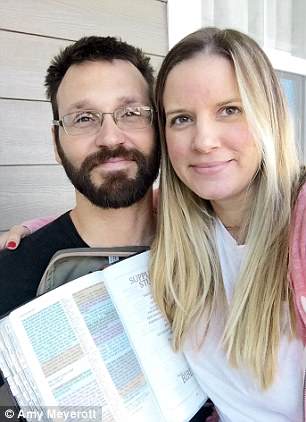 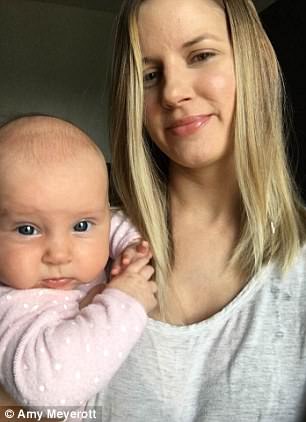 The results revealed that Amy (pictured, left, with her husband Andrew, and right, with her daughter) was Irish and that she had a close relative, a woman named Maureen, who turned out to be her father’s sister

Meyerott was spending Christmas last year with her husband, Andrew, her daughter, Madeleine, and she was just a month away from giving birth to her second daughter, Myla.

After receiving the DNA test as a Christmas gift from her sister-in-law, Meyerott and her husband both decided to take it.

AncestryDNA takes a saliva sample and looks at more than 700,000 different ‘markers’ in the DNA to create a profile for each user. 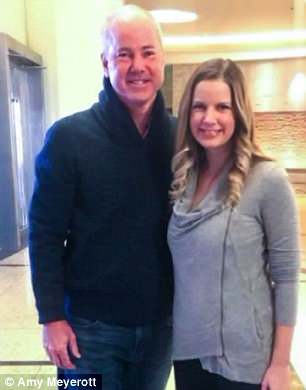 After conferring with his sister, Berrigan (left) sent a message telling Meyerott (right) that he believed she was his daughter and that he wanted to meet her

To find people you are related to, your profile is compared to profiles of other people who have taken the test and similarities are studied in the DNA.

‘When I got the results back, I found that I was significantly Irish, which I hadn’t known,’ Meyerott told Daily Mail Online.

‘And it also showed that the only close relative I had was a woman named Maureen, who had a different last name than anyone I had known from my mother’s side.’

Meyerott said she was certain Maureen was her biological father’s sister but, after some debating, decided not to reach out.

However, Maureen had noticed that Meyerott was listed as a close family member and called her brother, Tim Berrigan. They concluded that the only way Meyerott would have been flagged was if she either her daughter or Berrigan’s.

Berrigan was shocked. He had recently married his wife Julie, he had three children, and had never been told by Meyerott’s biological mother hthat she was pregnant.

In March, Berrigan directly reached out to Meyerott and told her that he had reason to believe she was his biological daughter.

When Meyerott received the message, she was stunned.

‘I was pretty shocked. I was holding my newborn daughter and after I read the message I yelled for my mom and husband,’ Meyerott said.

‘I read the message out loud to them and then my husband held our daughter as I wrote back to him.’

Berrigan asked Meyerott to confirm that she had received the message and invited her to call him. Meyerott estimates that she replied about 20 minutes after he sent the initial message.

‘It was surreal, but I imagine it was stranger for him because I knew I had a father for 32 years but he didn’t know he had a daughter for 32 years,’ she said.

One week after their phone call, Berrigan took time off time from his job as a radiologist to visit Meyerott in St Louis. 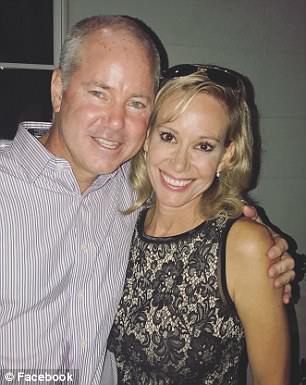 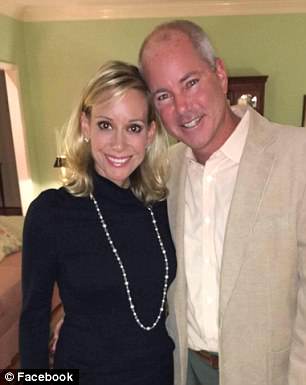 Berrigan (left and right, with his wife) flew out a week later to visit Meyerott in St Louis and she has since returned the favor, visiting him in Tennessee 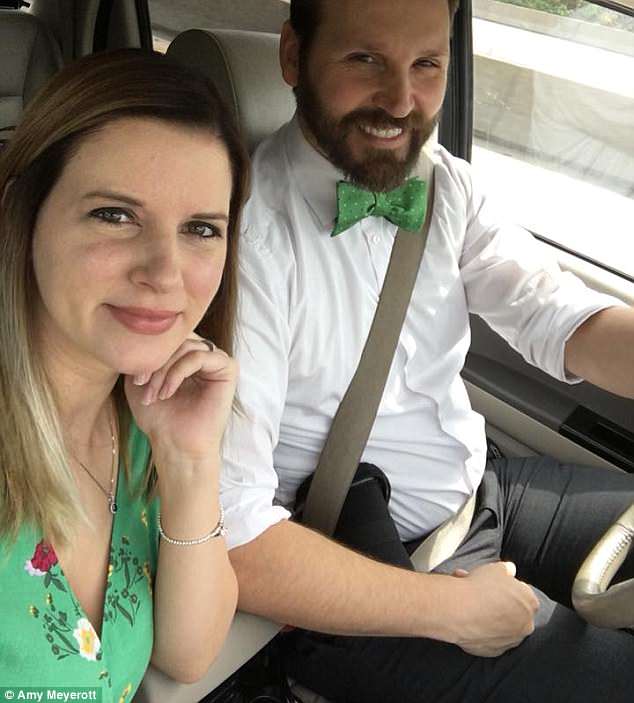 ‘It was surreal but I imagine it was stranger for him because I knew I had a father for 32 years but he didn’t know he had a daughter for 32 years,’ Meyerott (pictured, with her husband) said 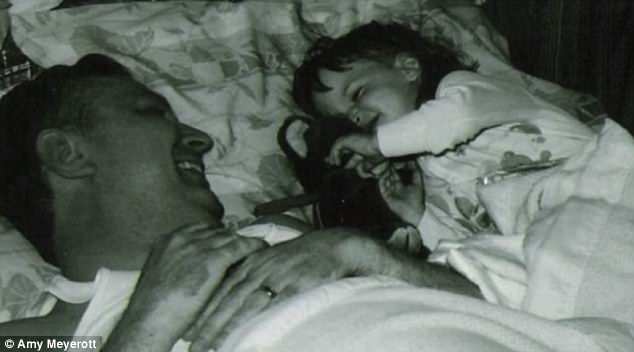 Meyerott (pictured, right, with her adoptive dad) said she had been scared to do the test because she didn’t know if her biological father would want a relationship with her, but said she’s glad she did it

‘It was really comfortable. It was like we had known each other for a long time,’ Meyerott said.

She has since visited Berrigan and his family in Tennessee and was even visiting further extensions of her newfound family in Hilton Head Island, South Carolina, at the time of this interview.

She said she never expected what would result from that one DNA test.

‘What really kept me from wanting to do the test was that I just didn’t think that he would want to have a relationship,’ Meyerott said.

DNA testing kids made headlines recently after one was use to arrest a serial killer.

Authorities in California identified Joseph James DeAngelo as the Golden State Killer – who murdered 12 and raped as many as 50 women – after a distant relative submitted their DNA to the genetic testing company, GEDmatch.

It has raised several question about whether or not law enforcement should be able to use a consumer genetic database to aid in a criminal case.