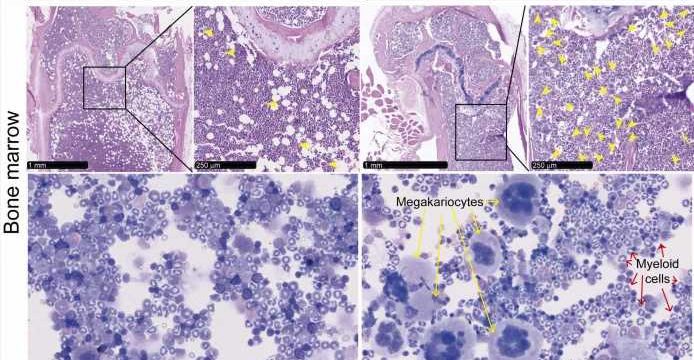 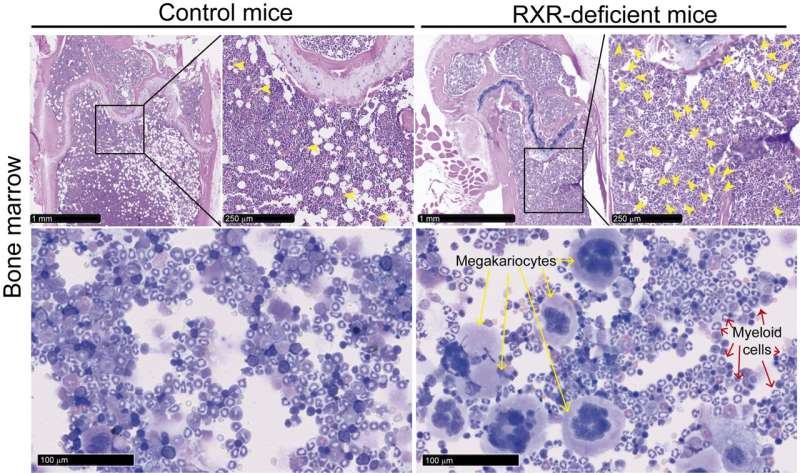 The cell protein retinoid X receptor (RXR) is a key factor in the maintenance of hematopoietic stem cells, the immature stem cells that give rise to all the blood cell lineages. RXR ensures that these cells remain youthful and fit, thereby reducing the risk of developing myeloproliferative syndromes as the body ages.

Recently, a study was carried out by a team at the Centro Nacional de Investigaciones Cardiovasculares (CNIC) working in partnership with researchers at Cincinnati Children’s Hospital. The study results demonstrate that the regulatory action of RXR on hematopoietic stem cells is essential for the maintenance of a balanced production of the spectrum of blood cell types throughout life.

The study findings, published in the journal Blood, could have therapeutic implications for conditions that feature excessive proliferation of myeloid blood cells, as is the case in some diseases of the blood and cardiovascular systems.

RXR acts as a nutritional sensor of lipids and derivatives of vitamin A, altering gene expression and influencing important biological functions such as immunity, metabolism, and cell differentiation. Alterations to the expression or activation of RXR are related to the development of metabolic and inflammatory diseases affecting several bodily functions, including the cardiovascular system.

Blood cells have a short lifespan, and because of this, “they must be continuously replenished from a small reservoir of hematopoietic stem cells located in the bone marrow,” explained Dr. Mercedes Ricote, who leads the Nuclear Receptor Signaling group at the CNIC. However, the replicative capacity of hematopoietic stem cells is limited, and they must therefore be maintained in a dormant state and divide in a highly controlled way to ensure that they do not become exhausted prematurely.

In the article published in Blood, Dr. Ricote’s group and the team led by Dr. Jose Cancelas at Cincinnati Children’s Hospital demonstrate that the elimination of RXR from hematopoietic stem cells in mice triggers chronic expansion of a subgroup of cells skewed towards megakaryocytes (the progenitors of blood platelets) and the myeloid lineage, resulting in a deficit of the lymphoid lineage and the development of myeloproliferative syndrome as these mice age. 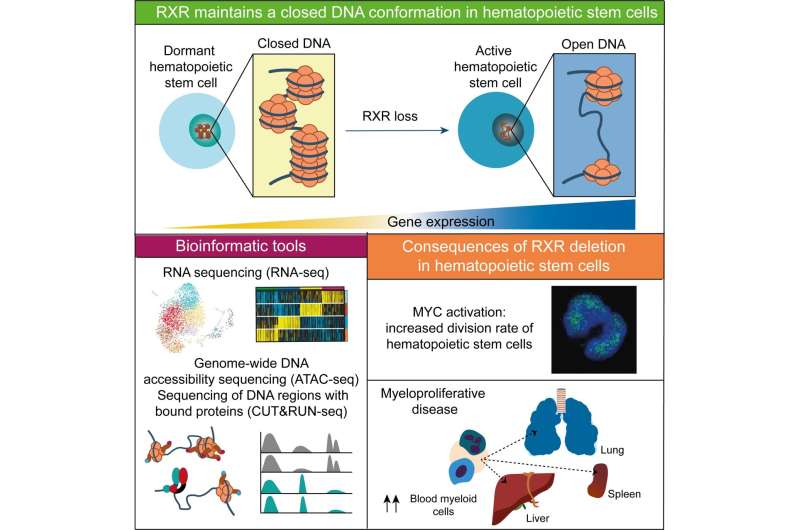 The research, whose first authors are Dr. Ma Piedad Menéndez-Gutiérrez and Jesús Porcuna (CNIC), shows that the excessive production of inflammatory myeloid cells in the RXR-deficient mice results in the invasion by these cells of multiple tissues, especially the lung, where they cause severe damage, leading to the premature death of these mice.

“Thanks to this analysis, we were able to demonstrate that deletion of RXR in young mice causes the DNA in their hematopoietic stem cells to adopt an open and active conformation, resulting in the expression of genes typical of old cells and the activation of genes regulated by the oncogene MYC, an important protein in the control of hematopoietic stem cell division,” commented Dr. Menéndez-Gutiérrez.

“We also generated mice deficient for both MYC and RXR, allowing us to conclude that the activation of MYC is the direct cause of the hyperproliferation of hematopoietic stem cells lacking RXR,” she concluded.

The researchers emphasize the possibility of modulating RXR activity in hematopoietic stem cells through the use of drugs, some of them already used to treat cutaneous lymphomas.

Jesús Porcuna concluded, “Our study could have therapeutic implications for conditions characterized by excessive proliferation of myeloid cells, such as some diseases of the blood and cardiovascular systems. Moreover, our findings suggest that the modulation of RXR could be exploited to expand hematopoietic stem cells for therapeutic or regenerative purposes.”