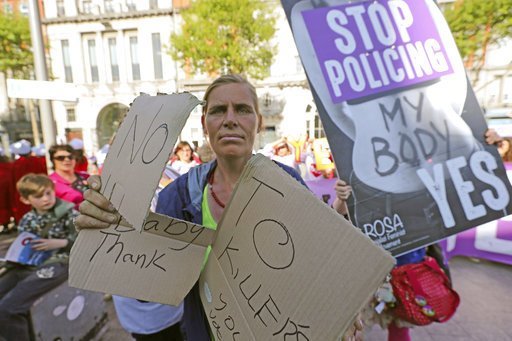 An abortion debate that has inflamed passions in Ireland for decades will come down to a single question on Friday: yes or no?

The referendum on whether to repeal the country’s strict anti-abortion law is being seen by anti-abortion activists as a last-ditch stand against what they view as a European norm of abortion-on-demand, while for pro-abortion rights advocates, it is a fundamental moment for declaring an Irish woman’s right to choose.

Opinion surveys suggest a continuing change of attitudes in Ireland, a traditionally Roman Catholic country that surprised many by voting in favor of same-sex marriage in 2015. Both sides generally agree that the frenzied campaign ahead of Friday’s vote has not produced the dramatic shift in public opinion that anti-abortion campaigners were hoping for.

Still, David Quinn of the socially conservative Iona Institute says the “no” forces opposed to abortion rights still have “a fighting chance,” and recalled other recent political upsets.

Activists from both sides have put up thousands of emotional signs pleading their case and there were small demonstrations in Dublin on Wednesday as the vote neared.

Friday’s poll will be the fourth time in as many decades that Irish voters have been asked to decide on the issue of abortion.

But this time the debate has been roiled by two factors that voters have not faced before: The extraordinary power of social media and the increased availability through on-line telemedicine websites of new drugs that allow women to make profound decisions over whether to end a pregnancy in the privacy of their homes.

Facebook and Google have both taken steps to restrict or remove ads relating to the referendum in a move designed to address global concerns about social media’s role in influencing political campaigns, from the U.S. presidential race to Brexit.

At the heart of this vote is whether or not to reverse a far-reaching 1983 referendum that inserted an amendment into Ireland’s constitution that committed authorities to equally defend the right to life of a mother and that of a fetus from the moment of conception.

The issue has been revisited repeatedly after heartrending “hard cases” that, abortion rights activists say, exposed vulnerable women to miserable choices—and even, at times, death.

Abortion is legal in Ireland only in rare cases when the woman’s life is in danger, and several thousand Irish women travel each year to terminate pregnancies in neighboring Britain. That number has fallen dramatically in recent years as women turned to online websites to illegally import drugs that end pregnancies. 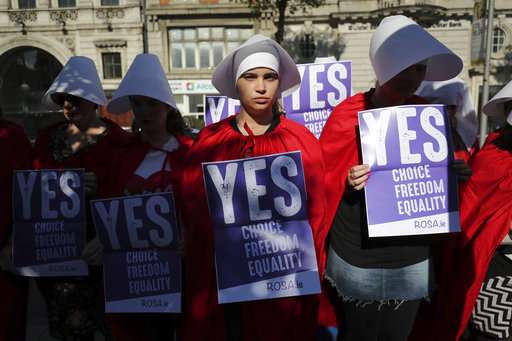 Pro-abortion rights activists have sought to focus public attention on the difficult cases, including the fate of Savita Halappanavar, a 31-year-old Indian dentist who had sought and been denied an abortion before she died after a miscarriage in a Galway hospital on Ireland’s west coast in 2012. The man who led the Irish health service’s inquiry into her death has called for the constitutional ban on abortion to be repealed.

In an effort to neutralize the “hard cases” argument, some prominent anti-abortion campaigners have lately shifted their stance, even suggesting that new laws could be enacted to permit abortions in certain limited cases.

But that compromise was dismissed by Irish Prime Minister Leo Varadkar, a medical doctor who favors repealing the constitutional ban. He said it is the country’s “hard laws that create hard cases.”

Friday’s referendum has placed the abortion debate on center stage, with many on Dublin’s crowded city streets wearing buttons or T-shirts that align them with the “yes” or “no” side.

Jessie Carton was walking down O’Connell Street Wednesday in a “Repeal the Eighth” T-shirt, a reference to the amendment behind the constitutional ban. The 17-year-old is too young to vote—but she would vote “yes” if she could.

“My auntie was forced to maintain her pregnancy, even though they told her the baby would die,” Carton said, adding that she would vote to repeal “so other women don’t have to go through what she did.”

An elderly Dublin man, John Byrne, wore a “no” button on his lapel.

“I believe in life. I believe God is the giver of life,” the 78-year-old said, adding that he credits God with helping him overcome alcohol addiction.

“I drank, and I remember sleeping in the bushes in Merrion Square. God bailed me out. … It’s high time I did something for him,” he said. “We’ve gone too liberal in Ireland altogether, and we would be better off if we respected our Christian values.”

The “no” forces are fearful that the urban vote in cosmopolitan Dublin could overwhelm their bid to keep the constitutional ban in force.

Quinn, the “no” backer from Iona Institute, says that if turnout is high in Dublin, the “yes” side is likely to triumph. A high rural turnout would keep the ban in place, he predicted.