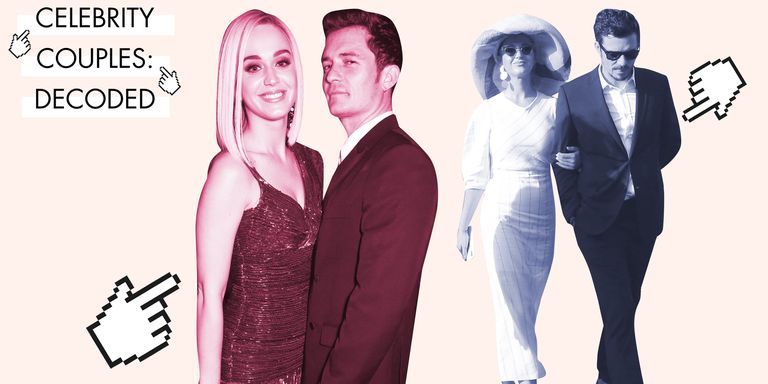 As it happens, their love is very much alive: After several public sightings of the duo, Katy admitted on American Idol that she’s no longer single. Will the couple’s second time around be any different from the last? Body-language expert Blanca Cobb assesses the couple’s interactions before and after their rekindling:

The first thing Cobb notices is Orlando’s protective stance: A step ahead of Katy, he holds his left arm away from his body, as if to block her from the crowds. “It’s chivalrous and loving,” Cobb says.

Meanwhile, Orlando lifts his left foot while Katy steps forward with her right. Typically, walking this way suggests a duo is out of sync emotionally. Here, Cobb says context may provide a better explanation: They’re in a crowded airport and clearly have somewhere to be — they’re not taking a leisurely stroll, she says.

At any rate, even if Orlando did slow down and reach out to Katy, she holds her bag in her right hand, between them. “This makes it harder to maintain a connection,” Cobb says, suggesting the singer may purposefully be keeping her distance.

Above, both Katy and Orlando lead with the same foot and a similar stride, which tells Cobb this couple is emotionally on the same page. Again, Orlando takes the lead — see his shoulder ahead of Katy’s?

Meanwhile, Katy holds Orlando’s elbow to keep him close. “There’s a natural curve in her fingers — no tension,” Cobb says. With a serene smile, the singer appears relaxed.

At the same time, Orlando appears a bit more uptight: He has his right hand in his pocket and his left behind his back, Cobb notices. “This doesn’t mean there’s something amiss between them,” she says. “The positioning could be for comfort, part of his baseline, or a response to being in public with a photographer in front of them.”

Now note the way Katy holds her bag and phone in her hand — furthest from Orlando. “Here, nothing can come between them,” Cobb says.

“There’s a real smile there,” Cobb says of Katy’s grin, which might as well be contagious: While Orlando’s face is partially out of sight, the smile lines around his mouth suggest he’s enjoying Katy as much as she’s enjoying him, Cobb says.

Although Orlando faces Katy — a sign he’s into her — and Katy is angled away, she turns her head to make eye contact in a pose that looks unstable at best and uncomfortable at worst. “She’s making accommodations to engage with him,” Cobb says, taking the gesture as evidence of their magnetic chemistry in this moment.

At the same time, she notes, it’s unusual to be so close to someone you’re attracted to without touching. (See their hands?) “It’s a little odd,” she says, insisting their attraction to one another is still undeniable here.

There are few opportunities for tender interactions while riding tandem on a bike, according to Cobb, who notes that the motorcycle appears to be stopped.

“She doesn’t have to have her hands on him, but she does,” Cobb says. “Maintaining a connection is a good sign. It says, ‘I’m thinking of you, even though we’re not talking right now.'”

“It’s nice how he has his arm draped around her,” Cobb says, noticing the way he lets his forearm fall for more body contact. (Other men might have stretched an arm out on the back of the seat.) Also important: In this candid shot, the couple has chosen to remain physically close, with Katy’s left side overlapping with Orlando’s right front of shoulder. “It means they’re feeling some kind of bond — a connection,” Cobb says. “She’s embracing his touch.”

NOW: STANDING AS ONE

Because this photo is dark, it’s tough to tell whether Orlando is pressing his hips against Katy’s backside — an intimate move, Cobb says. “Either way, he’s figuratively behind her, which sends the message, ‘I got you. You can lean on me.’“

Particularly in the context of this moment — the couple is in public with their attention focused in different directions — Cobb sees their positioning as romantic. “Although they’re not interacting, Orlando’s hand on Katy’s waist sends the message, ‘I’m attracted to you and I want to be with you,'” she says.

Meanwhile, Katy doesn’t appear to be pulling away, which Cobb sees as a good sign.

“When couples break up, it’s not always because they had no connection,” Cobb says. “You can break up and still have a flame — it’s just not as strong at the moment. For Katy and Orlando, there must have been something there for them to try it again. We’ll see what happens.”