Four in five primary school students eat a packed lunch every day, costing parents around A$20 a week. That’s almost 10 million lunchboxes across Australia every week.

But nine in ten of these contain so-called “discretionary foods” such as cake, chips, muesli bars and fruit juice. These foods are not necessary for a healthy diet, and are often high in saturated fat, sugar and salt, and low in fibre. 40% of energy in an average lunchbox comes from these discretionary foods.

Busy parents need to find replacements for these discretionary foods, which are not only healthy, but also easy, cheap and tasty. Our research shows parents can make healthier swaps, without costing them more.

What children should be eating

Healthy lunchboxes can play a big role in positively influencing students behaviour in the classroom, academic achievement, health and weight.

Generally children should have a variety of foods from the five core food groups: vegetables and legumes; fruit; grain foods (mostly wholegrain and those high in fibre); lean meats and poultry, fish, eggs, tofu, nuts and seeds; milk, yoghurt and cheese (or alternatives). 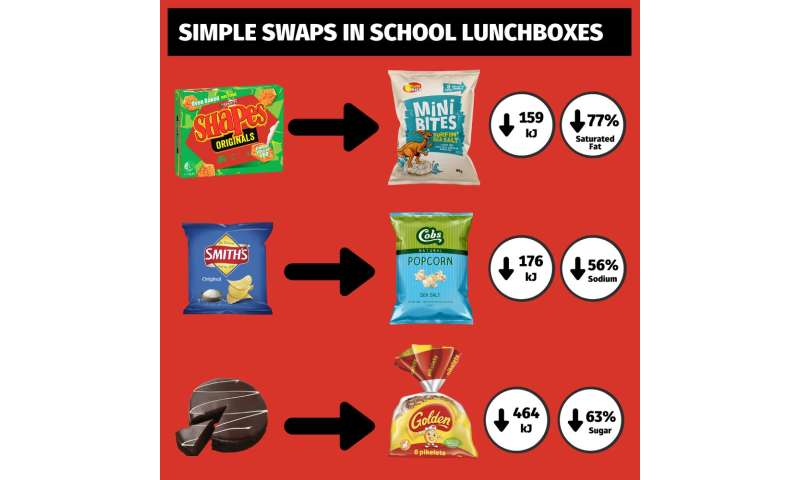 Depending on their age and sex, children should consume somewhere between 4,500-7,000 kilojoules per day. But it’s also important where they get that energy from. It’s recommended children limit their intake of saturated fat, salt and added sugar.

A healthy lunchbox doesn’t need to be fancy, expensive or time consuming.

A healthy recess would mean, for instance, children eating one serving of fruit or vegetables, some yoghurt and a few rice crackers. At lunch, children could eat a simple sandwich, wrap or roll, or leftovers made from core food group ingredients such as veggie-loaded wholegrain pasta.

How to replace junk foods with healthy ones

Parents have told us they want convenient and cheap foods to pack, that their children want to eat. So, we developed a healthy lunchbox program called SWAP IT. In this program, we provide simple ideas for swapping unhealthy foods kids might like to healthier ones comparable on cost, taste, texture and preparation time. 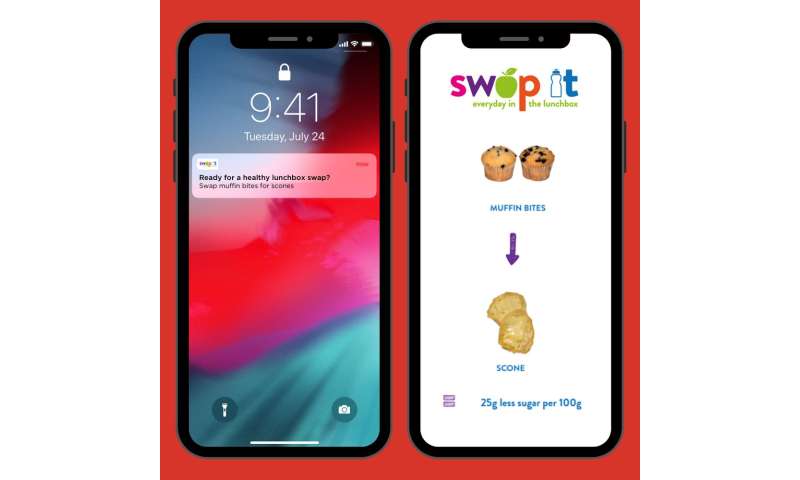 For instance, you could swap

Perhaps one of easiest things you could do is to try ensure your kids stick to drinking water.

Our research found SWAP IT supported parents and students to reduce energy from discretionary foods by 600kJ per week. Research suggests a small reduction of 600kJ per week is enough to meaningfully impact population levels of obesity.

It can be rolled out to schools

But a barrage of unhealthy foods are promoted to parents and children, often disguised as healthy choices. Parents and children see as many as ten junk food adverts per hour. And more than half of parents report their child’s “pester power” influences what they pack in their lunchbox.

Parents told us they wanted easy to access information when they were in the supermarket. So we got parents to sign up to SWAP IT via their school’s usual communication app.Around two-thirds of primary schools used such apps.

We prompted parents with swap ideas each week by sending push notifications to their phones. We found 84% of parents liked having the messages sent directly to their phones.

Research shows four in five primary school principals agree it is a school’s role to support parents to pack healthy lunchboxes. We found SWAP IT could be rolled-out to schools through their communication apps at a cost of less than A$1,800 per school.