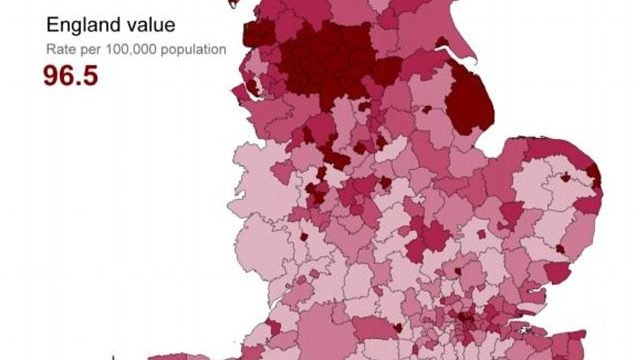 Poorer areas of England have up to five times more fast food shops than better off places, an official map has revealed.

Figures from Public Health England show more than a quarter of all eateries in the country are fast food outlets.

And the food shops – which are often packed with heart damaging pizzas, kebabs and burgers – are more common in places where people are less well off.

Meanwhile, Rochford in Essex has the fewest, with the equivalent of 25.7 shops per 100,000 people, followed by Wokingham in Berkshire, with 36.2.

There are more fast food shops in typically poorer areas in the north, and fewer in the wealthier south – scroll down to the official table see how your area ranks.

A quarter of adults are obese in the UK, as are one in five 11-year-old children – and the increase in extremely fat people is being described as a health crisis. 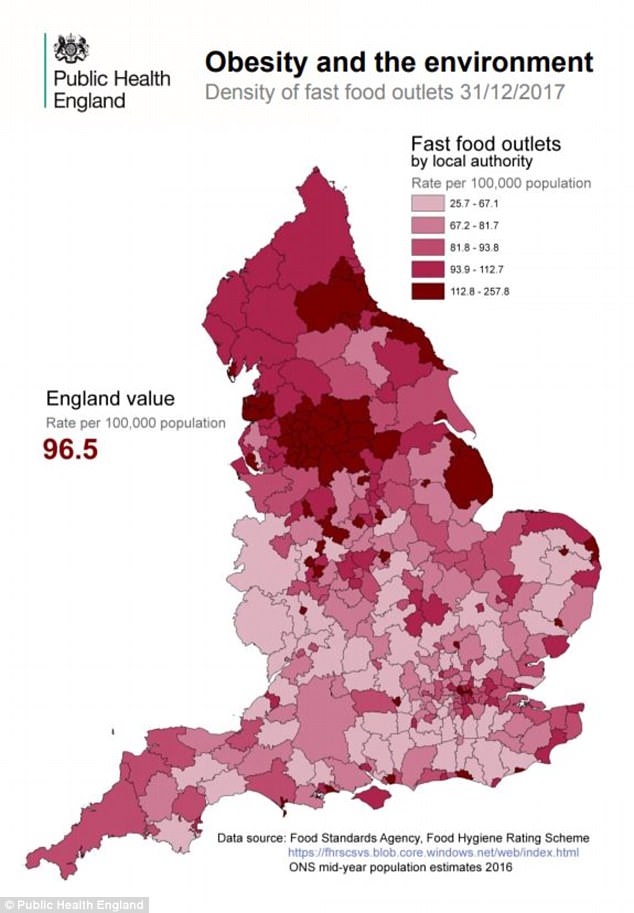 Data released by Public Health England reveals more than a quarter of food establishments in England are fast food shops, and there are more in deprived areas

In new data released by Public Health England (PHE), officials have added up how many fast food outlets there are in every council authority in the country.

Numbers reveal the total numbers of junk food shops in 326 local areas, plus the ratio of the takeaways per 100,000 people.

The map also reveals the differences between regions, showing people in the South East have the least access to fast food – with an average of 74.6 shops per 100,000 people – while the North East has the most with 125.4.

And PHE says there are five times more of the outlets in the country’s most deprived communities.

The proportion of food places which sell fast food is higher in areas which are considered more deprived by the Government, according to the data.

The figures come days after the Government published the second chapter of its childhood obesity strategy, including proposals to introduce mandatory calorie labelling on menus and a 9pm watershed on junk food adverts.

Obesity costs councils hundreds of millions of pounds a year

People being obese is thought to cost local authority £352 million per year in social care.

Experts say that although fast food is not always unhealthy, it often contains a lot of salt, calories and saturated fat.

Eating too much fat or salt can damage the heart and blood vessels and makes people more likely to become obese.

Obesity raises the risk of a number of deadly health conditions like cancer, stroke, heart disease and type 2 diabetes.

‘They need to question whether these fast food hotspots are compatible with their work to help families and young children live healthier lives.

‘It’s not surprising some children find it difficult to resist the lure of fast food outlets when many neighbourhoods are saturated with them.’

More than a quarter of food establishments are fast food

Of the 207,617 eateries in England, 53,333 (26 per cent) are fast food outlets selling items including burgers, kebabs, chicken, chips and pizza, according to the data.

An PHE says the country’s poorest communities are hotspots for such outlets – with more being clustered in the north, and fewer in the south and home counties.

Almost one third (32 per cent) are in the top 20  per cent of the most deprived local authority areas, the figures show.

Leeds has the most fast food shops in a single authority, with 957, while the Isles of Scilly has the fewest with just two – Rochford has the fewest on the mainland, with 22.

She said: ‘We urgently need to take action to tackle childhood obesity and councils are playing their part, but need more planning powers to help tackle this epidemic which has made the UK the most obese nation in western Europe.

‘Councils appreciate that a flourishing hospitality sector in our towns and cities is good for local economies, and where they have introduced restrictions on takeaways are working with businesses to help create healthier menus for their customers.

At least 40 local authorities in England have policies to restrict the growth of new takeaways and fast food outlets, PHE said.