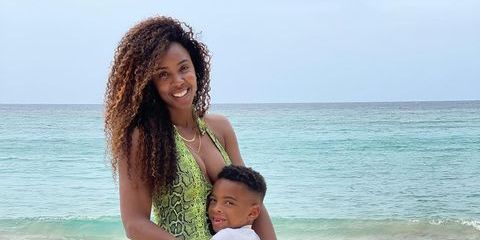 Kelly Rowland has made it clear that exercise is a priority in her life and, yeah, it shows. She just dropped the sweetest photo on Instagram of herself and her son at the beach, and she has legs for days in it.

“❤️Summer Love❤️” Kelly captioned the pic. In it, her son Titan, is giving her a big hug around the waist while Kelly poses in a gorgeous snake print one-piece, casually accessorized with a tight butt and toned legs.

Kelly gave birth to her second son Noah in January, and people definitely noticed how amazing she looks. “Just had a baby where?????” one person wrote in the comments. “Okay Bawdy 👏🏽🏽,” someone else wrote. “SnapBack Queen 😍🔥👏,” another fan chimed in.

Kelly worked out during her entire second pregnancy—even crushing a workout right before she gave birth to Noah. Kelly posted several videos to her Instagram Story in January—when she was nine months pregnant—showing herself doing bodyweight exercises, including a wall sit, squats, and donkey kicks, with an obvious baby bump.

Kelly told Women’s Health in October that her non-pregnancy workouts include 90-minutes with her trainer Massy Arias or with the pros at the Dogpound gym near her house. She likes to mix things up, but she’ll do cardio, weighted crunches, band work, and lots of movement.

Kelly also eats really well. She told WH that she usually kicks her day off with a breakfast of oatmeal sweetened with raspberries and sometimes sprinkled with chia seeds or flaxseeds. She also said she’s “obsessed” with sandwiches, like a turkey option with mustard, rye, sprouts, onion and avocado. And, for dinner, she’ll usually have chicken or fish, along with asparagus or a salad.

While Kelly said that she doesn’t really count calories, she tries to avoid eating past 7 p.m. And, when she has to pull a late night at the recording studio, she’ll opt for healthier snacks.“Trust me, there are some days when it’s hard to look at seeds and nuts and fruit when everybody’s got French fries and burgers and Roscoe’s chicken and waffles at midnight,” she said.

Is that one-piece available? Because…