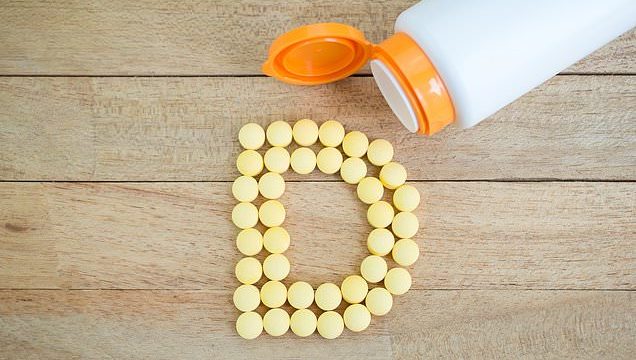 You can overdose on vitamin D: Man who popped 20 supplements a day – 80 TIMES more than he needed – was so ill medics feared he had cancer

Doctors are warning about the dangers of taking too much vitamin D after a man became so ill medics feared he had cancer.

The middle-aged patient, from Kent, lost two stone in three months after suffering from constant vomiting, diarrhoea and stomach pains.

His symptoms started a month after taking a daily cocktail of 20 over-the-counter supplements, which equated to 80 times the recommended vitamin D dose.

The unnamed patient was admitted to hospital and had a series of scans to rule out cancerous tumours.

Blood tests revealed his vitamin D level was seven times above normal and he had suffered acute kidney damage.

He was kept in hospital for more than a week and given drugs and intravenous fluids to flush the supplements out of his system.

The doctors who treated him warned his case ‘further highlights the potential toxicity of supplements that are largely considered safe’.

Vitamin D — the sunshine vitamin — helps regulate the amount of calcium in the body, keeping bones, teeth and muscles healthy.

NHS advice is that everyone should consider taking a daily vitamin D supplement during the autumn and winter.

What is vitamin D and how do I get it?

Vitamin D is a type of vitamin that the human body gets from both diet and produces when exposed to sunlight.

What does it do?

It helps regulate the amount of calcium and phosphate in the body.

These nutrients are needed to keep bones, teeth and muscles healthy.

People who don’t get enough vitamin D can suffer from bone deformities such as rickets in children and osteomalacia (a softening of the bones) in adults.

How do I get enough vitamin D?

In the UK most people will get the vitamin D they need from sunlight between April and September as long as they go outside.

The body naturally produces vitamin D when exposed to sunlight.

Vitamin D is also found in foods such as oily fish, liver and egg yolks.

Do I need to take a supplement?

The NHS says people should consider taking a vitamin D supplement in the winter month when sunlight is weaker.

Other people may need to take vitamin D throughout the year due to being housebound, or if they have dark skin which reduces the amount of sunlight their skin absorbs.

Children aged one-to-four years old should also be given a daily vitamin D supplement of 10micrograms(μg) of throughout the year.

How much should I take?

The NHS advises 10μg a day is enough for most people.

What happens if I take too much?

Taking too much over a long time can lead to a dangerous build-up of calcium in the body which can weaken bones, and also damage the heart and kidneys.

The NHS advises against adults taking more than 100μg per day.

Children aged one-to-10 years should not exceed 50μg a day and infants under 12 months should not have more than 25mμg per day.

Vitamin D is frequently sold in units called IU. One microgram of vitamin D is equal to 40 IU.

But taking too much can cause excess levels of calcium to build up in the body, making the kidney work harder to filter it.

Adults and children over the age of one are advised to get no more than 600mg of vitamin D a day.

The latest case — revealed in the journal BMJ Case Reports — detailed a man who was taking a 50,000mg daily dose, 83 times the recommended amount.

He was referred to hospital by his GP after complaining of recurrent vomiting, nausea, stomach pains and leg cramps, for three months, in which time he lost 12kg (28lbs).

The patient was also plagued with tinnitus — ringing in the ear — a dry mouth and unquenchable thirst.

He had been recommended to start an intensive vitamin supplement programme by his private nutritionist, doctors said.

Once he started feeling unwell, he stopped taking his daily cocktail of vitamins, which also included omega-3, vitamin B2, B9, C, K2, plus several other mineral and probiotic supplements.

But the symptoms didn’t go away.

He was admitted to hospital to have CT and MRI scans to rule out cancers, and bacterial infections as the cause of his symptoms.

The man was kept on the ward after further tests showed excessive amounts of calcium in his body and damage to his kidney.

He spent eight days in hospital, where he was put on an intravenous drip to clear the supplements out of his body.

Doctors also treated him with bishosphonates — drugs normally used to strengthen bones — to help lower excessive levels of calcium in the blood further.

Two months after discharge from hospital, his calcium level returned to normal but his vitamin D levels remained abnormally high.

NHS doctors who treated him concluded: ‘Given its slow turnover (half-life of approximately two months), during which vitamin D toxicity develops, symptoms can last for several weeks.

‘This case report further highlights the potential toxicity of supplements that are largely considered safe until taken in unsafe amounts or in unsafe combinations.’

Vitamin D toxicity is usually caused by large doses of vitamin D supplements — not by diet or sun exposure.

That’s because the body regulates the amount of vitamin D produced by sun exposure, and even fortified foods don’t contain enough vitamin D to become toxic.

The main consequence of vitamin D toxicity is a buildup of calcium in the blood, known medically as hypercalcemia, which can cause nausea and vomiting, weakness, and frequent urination.

Vitamin D toxicity might progress to bone pain and kidney problems, such as the formation of calcium stones.

High doses are sometimes used to treat medical problems such as vitamin D deficiency, but these are given only under the care of a doctor for a specified time frame. Blood levels should be monitored while someone is taking high doses of vitamin D.