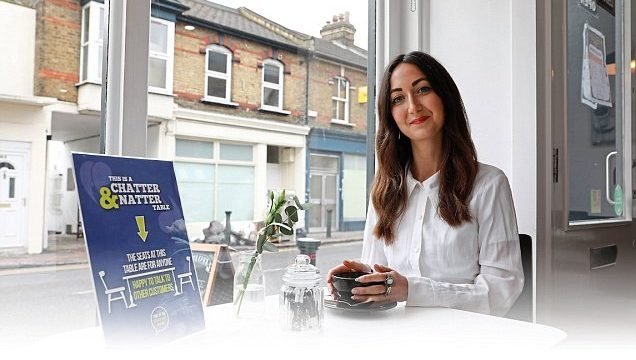 Would you talk to a stranger in a cafe? Eve Simmons sits at the ‘Chatter & Natter’ table of her local coffee shop – to investigate a bold new scheme that’s tackling loneliness in Britain

So – despite our 41-year age gap – that’s three things we quickly establish that we have in common.

The retired accountant has a 23-year-old daughter Emily, whose new boyfriend is ‘much better-looking than the last one’.

To prove it, she lets me flick through Emily’s holiday snaps on Facebook and asks me if I have a boyfriend (I manage to find a semi-flattering picture of him to show her). 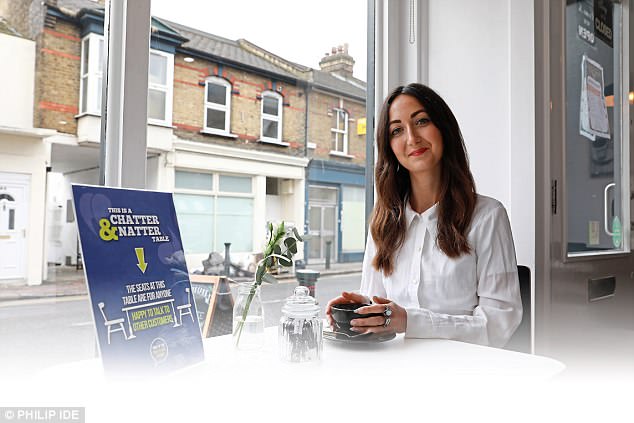 As we sip tea and gossip about last night’s TV, I feel as if I’ve made a new friend. And right now I could probably tell you more about Marianne than I could about most of my work colleagues

I get a sense that these things mean a lot to Marianne, who is from Eastcote, North-West London, perhaps because her own husband Roger died suddenly of sepsis two years ago. ‘I never wanted to be a widow,’ she confides.

It seems strange to think that just an hour and a half ago we were complete strangers.

As we sip tea and gossip about last night’s TV, I feel as if I’ve made a new friend. And right now I could probably tell you more about Marianne than I could about most of my work colleagues.

It’s a fact that isn’t lost on me when I consider how we just met: at a table in an ordinary high street coffee shop reserved for people who are alone and would like someone to talk to.

Beating loneliness… with tea and cake 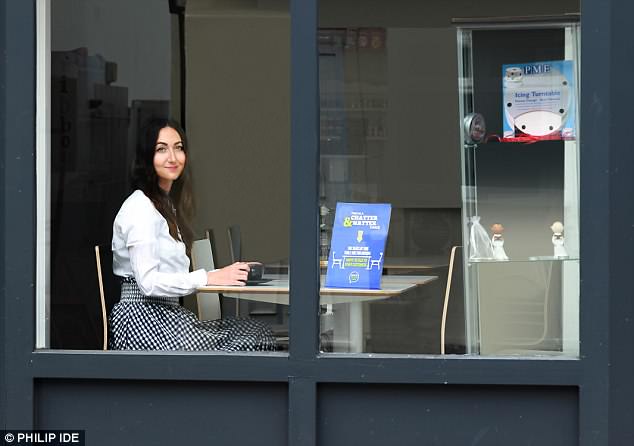 The venture has been gathering momentum since its launch last year, with high street chain Costa recently adopting it at selected branches around the country

We are drinking tea and sharing a slice of cake at a ‘Chatter & Natter’ table in the Carpentier and Co cafe in Pinner, near Eastcote, as part of the Chatty Cafe scheme, a nationwide initiative designed to combat Britain’s loneliness epidemic.

The venture has been gathering momentum since its launch last year, with high street chain Costa recently adopting it at selected branches around the country.

Just this month, a University of Copenhagen study of 13,000 patients suggested that social isolation was as big a risk factor for heart disease as heavy alcohol intake and smoking, and that people who are lonely had double the mortality risk of those who were socially active.

The evidence is undeniable: loneliness kills.

Could Chatter & Natter tables, which have been installed in more than 100 coffee shops nationwide offer a solution?

They are the brainchild of 34-year-old mother Alexandra Hoskyn, who became lonely after giving birth. 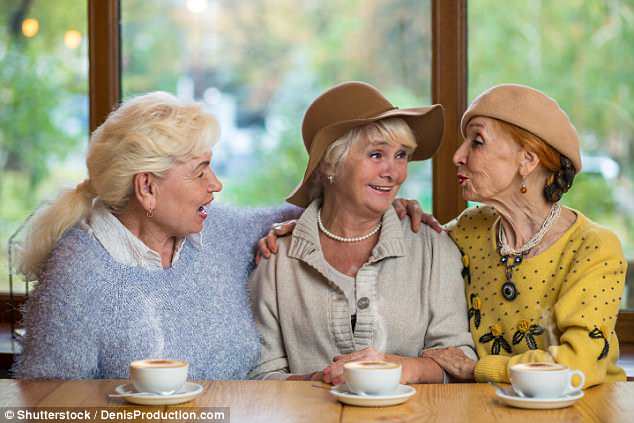 In this age of social media, dating apps and constant connectivity, the simple act of talking to a stranger shouldn’t feel odd

The Chatty Cafe scheme attracts people with signs placed on tables in participating cafes. Most of these tables are available from 9am to 6pm daily, and are open to all ages.

It is a charming idea, but, as I discovered at various cafes across the country, while meeting Marianne was a highlight, I did end up sitting alone a fair bit as other customers – also on their own – actively avoided coming anywhere near me.

In this age of social media, dating apps and constant connectivity, the simple act of talking to a stranger shouldn’t feel odd. But having spent the better part of three days trying to do just that, I’m amazed at how difficult – embarrassing, even – it has been.

But it also showed just how rewarding making real-life connections with people can be.

Not everyone wants to talk

A few days before going to Pinner, I visited a busy branch of Costa in Chichester, West Sussex.

Although it was listed on the campaign website – thechattycafescheme.co.uk – when I arrived I was told staff had stopped putting the Chatter & Natter sign on the table after finding it frequently flung on the floor.

‘Customers chat anyway, they don’t need a sign,’ the manager told me, handing it to me to put on my table.

There were other solo customers, woefully staring into their singular cup of coffee, but in the four-and-a-bit hours I spent there, no one came over to strike up a conversation. Maybe they preferred to be alone?

Next I tried Essence of Cake shop in Norwood, South-East London.

The one customer who walked in seemed more interested in the cake than the company – he gobbled a slice of Victoria sponge and darted out of the door without even noticing the Chatter & Natter table.

I sat there for five hours – spanning breakfast, brunch and tea-time – making just a solitary friend… the delightful cafe owner who clearly took pity on me. 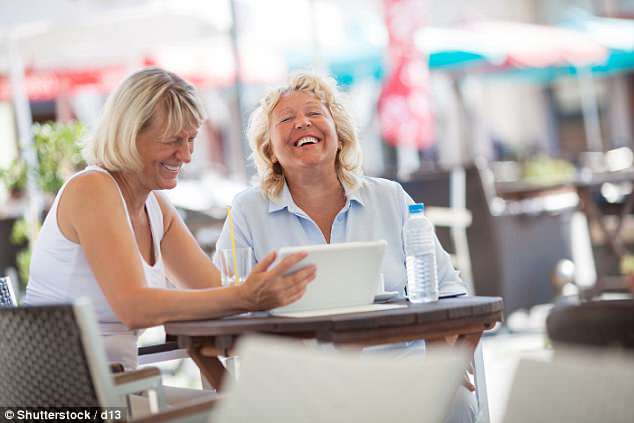 There were other solo customers, woefully staring into their singular cup of coffee, but in the four-and-a-bit hours I spent there, no one came over to strike up a conversation. Maybe they preferred to be alone?

Despite these two false starts, my third venture, to Carpentier and Co, proved to be a hit thanks to my meeting with Marianne.

And it made me realise that such an encounter could prove to be a lifeline for someone.

When I arrive at the Chatter & Natter table at Carpentier and Co, it is already occupied by Marianne and a couple of local businessmen who, I learn, pop in on a regular basis for a mid-morning coffee and slice of cake.

The three of them chat merrily about next week’s community festival (‘There’s an amazing vegetarian food stall,’ says one) and share appreciation for the cafe’s speciality coffee beans.

Within an hour, another person is at the table – William Roig, 47, a professional business coach from nearby Ruislip. ‘My wife died in January. I have two young sons,’ he announces.

Marianne reaches out a comforting hand from across the table.

‘For the first time, I find myself feeling lonely,’ he admits, looking quite teary.

He says he only recently moved to the area ‘so having places like this to visit a couple of times a week, where you know there will be people to talk to, is a real help’. 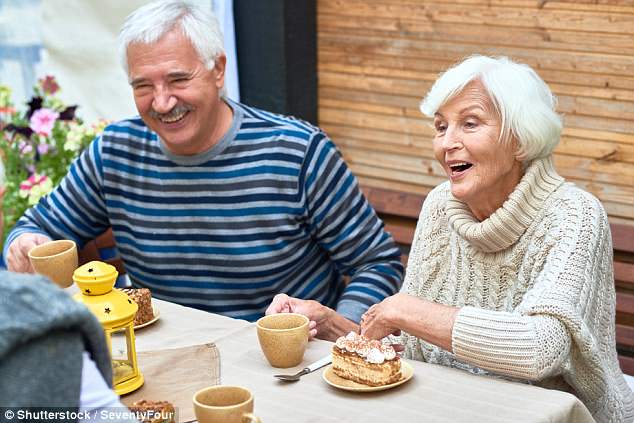 Within an hour, another person is at the table – William Roig, 47, a professional business coach from nearby Ruislip. ‘My wife died in January. I have two young sons,’ he announces

It is estimated that 2.4 million Britons experience chronic loneliness – according to the Office for National Statistics (ONS).

Chronic loneliness is defined as a persistent state of social isolation, or as defined by Age UK, the experience of not seeing or speaking to a friend or family member for at least a month.

Experts are calling it a health epidemic. Solitary living is said to increase the risk of fatal conditions such as heart disease, dementia, type 2 diabetes and depression, rivalling obesity and smoking in its scope for health implications.

It is thought this is due to the rise in levels of cortisol – the stress hormone – in people who are persistently isolated.

A consistently high cortisol level compromises the efficiency of the immune system and leads to inflammation in both the brain and the body.

Long-term, such inflammation is thought to contribute to heart disease, hypertension and depression.

Although the biggest problem lies with the over-65s, recent data suggests that even I – at 27 – am not immune from the loneliness epidemic.

Lonely 18-year-olds are twice as likely to develop mental-health problems, be physically inactive and smoke, according to research from King’s College London.

Considering the shamefully small amount of time I spend seeing my friends – as opposed to phone messaging – this doesn’t come as a surprise to me: our increasingly digitalised world – nine out of ten adults spend at least six hours each day looking at a screen – is clearly to blame for the reduction in human-to-human connections.

Gone, it seems, are the days of long, neighbourly chats among adults and bustling youth centres for youngsters.

Now most of our conversations take place in a virtual world.

The result is a polarisation of views and attitudes, and a nationwide decline in crucial human connections.

Given this, the Chatty Cafe scheme, which is recommended by schools, community centres and even MPs, seems like a really good idea. 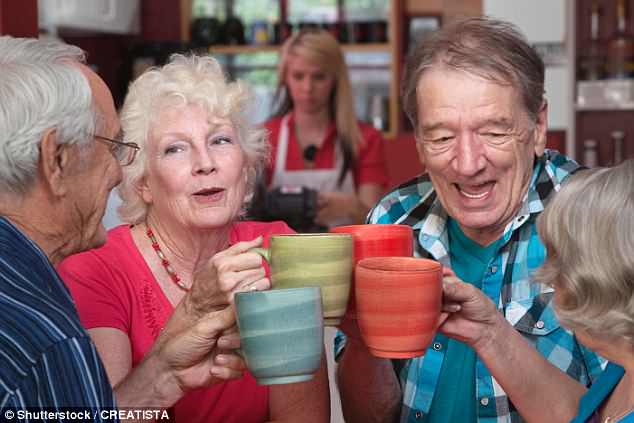 Experts are calling it a health epidemic. Solitary living is said to increase the risk of fatal conditions such as heart disease, dementia, type 2 diabetes and depression, rivalling obesity and smoking in its scope for health implications

It has to work with local services and businesses.’

Besides making this appeal, Crouch is drawing on the pioneering efforts of Jo Cox, who as MP for Batley and Spen campaigned to ease the ‘hidden crisis’ of loneliness before her murder in 2016.

To commemorate her, the Great Get Together, in which more than 5,000 groups of strangers assembled across the UK, took place last month to mark what would have been Jo’s 44th birthday.

Such initiatives aren’t only about forging friendships: they could be life-changing for many people.

It takes confidence… but it’s worth it

Back at Carpentier and Co, David Elliot, a 76-year-old local and another frequent visitor to the cafe, announces: ‘I’ll pay the bill.’

After retiring from his job as an IT technician for John Lewis, he launched a website providing listings of events and local news for his community.

He spends a large part of his week visiting local businesses for information and providing a friendly ear for local people.

‘Lonely individuals don’t often have the confidence to come to a place like this,’ he says.

‘I hope my website helps people along a bit, so they can find activities that interest them and meet others.’

But that doesn’t stop him treating three perfect strangers to a round of cappuccinos.

William says his thanks and farewells before darting off to work.

On his departure, David and Marianne share concerns about his wellbeing – they were ‘shocked and sad’ to hear of his recent bereavement.

Together, they hatch a plan to regularly ‘check in’ with William and his sons. ‘I’m so glad he told us,’ David says, and Marianne nods in agreement.

As I leave the cafe, I feel happily reassured about one aspect of my own health.

While treatments for many life-threatening conditions can cost thousands of pounds to the NHS, at least there’s one scientifically proven medicine that I will always have unlimited access to.

And all it will take is a real conversation with my best friend.