The ancient form of alternative medicine is growing in popularity as a viable treatment for a range of conditions. 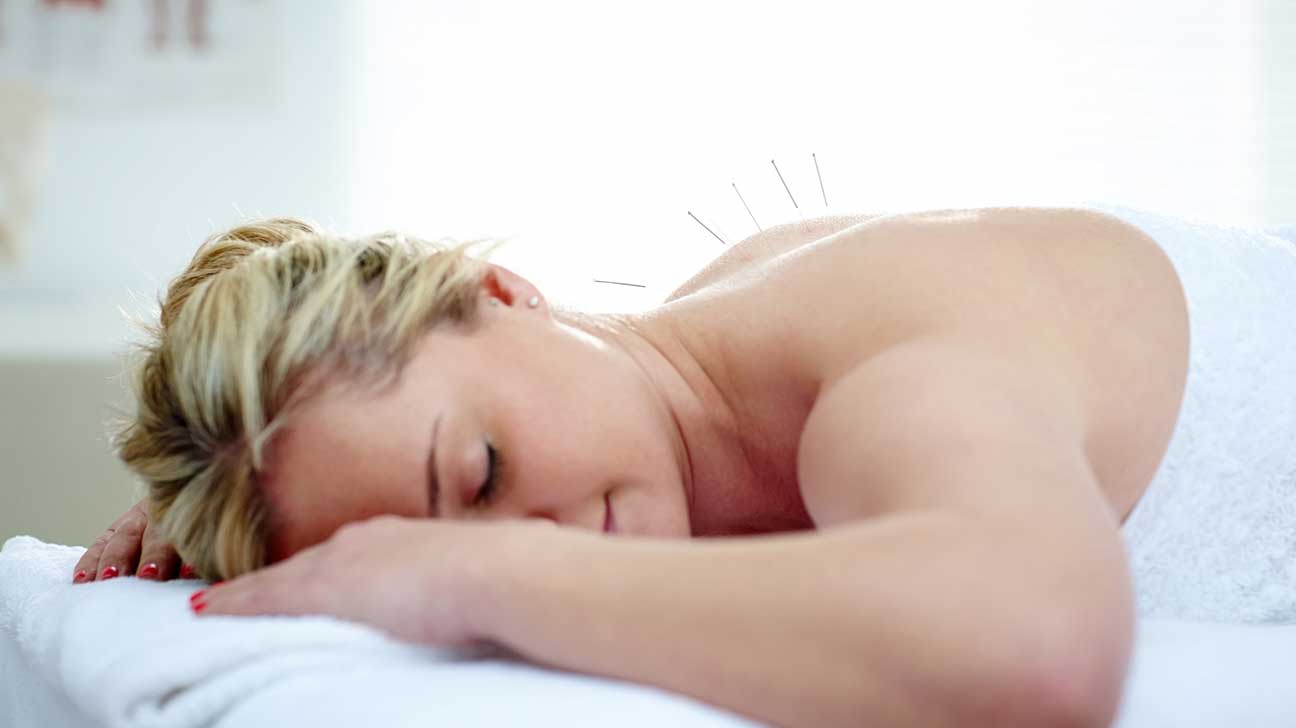 In the midst of the opioid crisis, acupuncture has been growing in popularity in the United States.

Primarily used for pain management, this ancient Chinese form of alternative medicine — which involves thin needles being inserted into the skin — has gained support from the U.S. Department of Veterans Affairs and Medicaid as a viable treatment in recent years.

While the scientific evidence of acupuncture’s benefits is still widely debated, research from key Western studies suggests it can be used to manage certain pain conditions — especially back and neck pain, osteoarthritis pain, and headaches.

It’s also been used to treat a range of other conditions. And as its popularity has grown, more people in the United States have begun turning to acupuncture when conventional medicine falls short.

Researchers are still trying to determine whether acupuncture can be a beneficial treatment for various health ailments. However, for those who may be seeking alternative options for hard-to-treat conditions, here are four areas in which acupuncture may help.

Heidi Boyson had suffered from chronic low back pain for a decade when she tried acupuncture for the first time in England.

She’d already tried chiropractors, physical therapy, and medication. “Nothing worked,” she told Heathline. “The acupuncturist put needles in my head and I fell asleep, which was great. When I woke up, I was much more relaxed.”

After just one visit, Boyson says her pain became manageable.

Western research has shown that acupuncture can be effective in managing pain. Exactly why it works is still unclear, though there are several theories.

The first written account of acupuncture, in “The Yellow Emperor’s Classic of Internal Medicine,” dates to 100 B.C. in China. The theory behind the practice suggests the stimulation of specific spots prompts the body to release a flow of energy, or “qi,” which travels through “meridians.”

The Western explanation: The needle stimulates a nerve, which sends a signal to the brain to release beta-endorphins. These chemicals work as the body’s own opioids, lowering pain thresholds.

Another theory proposes acupuncture changes cells in connective tissue around the pressure points in lasting ways that lead to less pain.

There is also evidence that stimulating the vagus nerve, which runs from the brain stem to the colon, may lower inflammation throughout the body. Inflammation is closely tied to chronic pain.

States looking to cut opioid prescriptions have been experimenting with extending Medicaid coverage for acupuncture as another option for pain treatment. Rhode Island, Oregon, and Ohio all have programs that extend coverage in part.

When Vermont commissioned a small pilot study on acupuncture for chronic pain in its Medicaid population, it concluded that 32 percent of people taking opioids for pain cut back. They were eligible for up to 12 treatments over two months.

The U.S. Department of Veterans Affairs has trained more than 2,800 providers of “battlefield acupuncture,” a protocol that involves the ear to relieve pain.

According to Charles Levy, a doctor at the Gainesville VA center in Florida, the protocol has helped with headaches, acute and chronic back and musculoskeletal pain, and neuropathic pain.

But the result depends dramatically on the pain, the practitioner, and the patient.

Last year, when Boyson was coping with occasional migraines, she went to an acupuncturist in New York City.

“Traditional medicine wasn’t helping, and [the acupuncturist] was lovely and affordable,” Boyson said, adding she’d feel good after each visit, but this time the effects didn’t stick.

One analysis looked at seven studies that compared the effect of acupuncture against a sham acupuncture procedure to treat tension headaches. The group that received the sham procedure had headaches 7 to 16 days a month, while those who had the real deal suffered two fewer headachy days. Everyone had a minimum of six weekly treatments.

Narda Robinson, an osteopath who uses acupuncture, says that when she treats headaches, she does a careful examination of not only the patient’s head, but also the neck and back and posture.

“I am accustomed to whole-person medicine — not focusing on one part at the exclusion of others,” she told Heathline.

Stimulating acupuncture points in dogs with paralyzed hind legs has allowed them to walk, she says.

“My veterinary colleagues and I witness remarkable turnarounds in dogs with thoracolumbar spinal cord injury from disc disease” she said.

Another remarkable turnaround happened to an environmental scientist in his 50s who came to see her for acupuncture.

Because of a car accident 20 years earlier, he couldn’t smile fully on one side of his face or clearly enunciate. His face, hands, and feet were numb.

But soon after she treated him, he began to regain sensation and motor skills he had been told would never return.

“At every visit, he’d report on how he could now feel the fine edges of the computer keyboard, use his fingers well enough to button his own shirt, and smile as well as speak more normally,” Robinson said.

“It’s certainly something that should be explored more intensively in human spinal cord injury clinics, both to facilitate recovery and reduce the need for surgery,” Robinson said.

However, the research so far has been mostly inconclusive. A 2015 meta-analysis of acupuncture to recover after spinal cord injury found only 12 studies, which did show improvements in motor function and functioning.

Yet a 2018 meta-analysis by the Cochrane group of whether acupuncture helps stroke survivors found more than 30 studies on the subject, and it was inconclusive.

Nevertheless, Robinson argues that the evidence is promising enough. She believes people with nerve damage should be offered acupuncture, especially if they have few other options.

The same logic might apply to hard-to-treat pain. In 2018, four U.S. anesthesiologists conducted an overview of nondrug treatments for fibromyalgia (a condition marked by fatigue and pain in many spots of the body). They concluded that meditation and cognitive behavioral therapy were more promising than acupuncture. But because it rarely causes any harm, they wrote it also “should not be discouraged.”

New strategies to lose weight are usually a fad. There is no gold-star research — large, controlled, randomized studies — to support a case for acupuncture to shed pounds.

But there is some early positive evidence.

Two points in the ear have traditionally been associated with appetite. A 2017 review found 18 randomized controlled studies of ear acupuncture for weight loss, though not big ones — the largest had only 200 participants.

The review concluded that ear acupuncture was linked to an average loss of about 3 pounds. Treatments that went on longer than six weeks had the best results.

Lots of research is underway on the effect of a person’s microbiome, the bacteria inside the body, on weight gain. One small Shanghai study has found that acupuncture reduced the number of Bacteroidetes, which are more plentiful in those who are obese.

Despite the widespread use of probiotics, we don’t yet have targeted ways of changing our gut flora.

In this study, among the 30 women who received acupuncture, the average BMI dropped from close to 28 to a bit over 25, and their Bacteroidetes levels also fell. A small control group didn’t lose much weight or see the same favorable changes in their gut flora.

There is some data suggesting that electro acupuncture is more effective than needles alone for weight loss, according to another overview.

Acupuncture may dampen inflammation, which is related to obesity as well as pain. If it relieves pain or anxiety, that could help people avoid overeating too.

“I don’t see acupuncture as having that big an effect on obesity itself, but more on addressing problems with pain and mood,” Robinson said.

The National Cancer Institute and other major medical organizations in the United States and Europe regard acupuncture as an appropriate treatment for post-chemotherapy nausea and vomiting.

A meta-analysis of 30 randomized and controlled trials involving more than 2,500 volunteers concluded that stimulating various acupuncture points cut nausea and vomiting within hours or a day after surgery, which is a common reaction to anesthesia.

The National Institutes of Health (NIH) is supporting research on acupuncture as a treatment for a range of conditions, including whether it can cut hot flashes, help manage pain related to chemotherapy, and reducing the severity of tinnitus.

The opioid crisis has also revived interest in acupuncture not just for pain relief, but also for relaxation to help wean people from addictions.

More research is needed to fully understand all the benefits acupuncture might offer. But until then, people seeking alternatives for hard-to-treat conditions may find relief through this Eastern approach to medicine.

“Conventional medicine is at a crossroads,” Robinson said. “The drugs-and-surgery dominant approach [to pain] is costly and incomplete” and patients end up “misdiagnosed and overmedicated for problems medical acupuncture” could help.