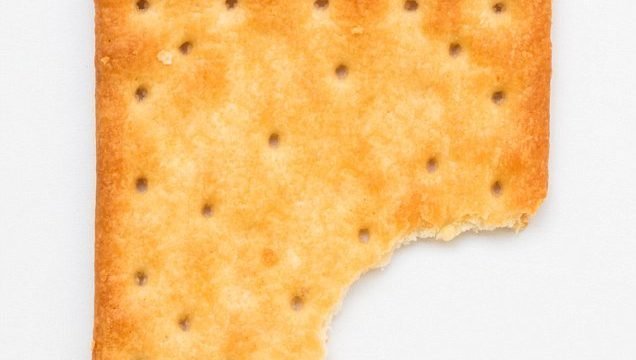 The test that reveals if carbs make you fat: Chew on a cracker until it changes flavour – if it takes less than 30 seconds, your body probably processes carbs quite effectively

Carbs have been my downfall — I love eating them so much that my 6ft frame once ballooned to 19st as a result (egg fried rice and custard tarts, if you must know). I dropped that to 13st through dieting, but still constantly have to watch my weight.

In making my new BBC television programme, The Truth About Carbs, I went on a mission, talking to leading experts to find out how to be clever with carbs.

So much dieting nowadays is all-or-nothing. People often try to banish all carbs from their diets. As I know from personal experience, this can just make people miserable — and is therefore almost impossible to sustain. 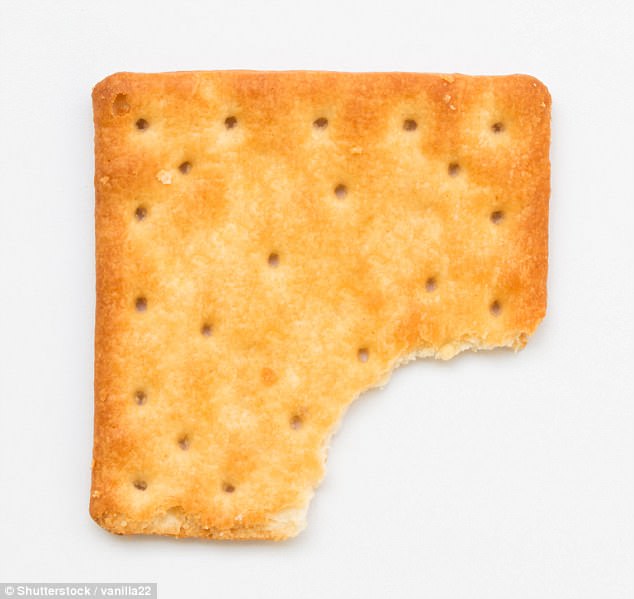 Test: The cracker test is a quick and easy way to see how many carbs you should be eating

But as I’ve now learned, not all carbohydrates are created equal. Some are very good for us, though many are indeed bad, causing us to pile on weight, raise our risk of diabetes and even threatening our fertility.

Learning to eat carbs more intelligently has helped me control my weight more easily. As a medical doctor with a degree in public health, I’m convinced it could bring similar benefits to millions of Britons. Here’s how to live happily on good carbs — and avoid the worst.

TEST THAT REVEALS IF CARBS MAKES YOU FAT

A lucky few can eat carb-heavy foods without piling on fat — because our bodies can process them very efficiently.

Many of us aren’t so fortunate. The cracker test is a quick and easy way to see how many carbs you should be eating.

Simply chew on a plain cracker until it changes in flavour from a bland biscuit to quite sweet. If the taste changes in less than 30 seconds, your body probably processes carbs quite effectively.

But if the cracker hasn’t changed taste after 30 seconds, then you should seriously consider eating a lower carb diet.

Dr Sharon Moalem, the Canadian geneticist who created this test, says a very slow (or no) taste change shows that your body doesn’t process carbs efficiently. This leads to perilous weight gain.

The physiological mechanisms behind this test have not been nailed down completely — it’s probably genetic, reflecting levels of amylase, an enzyme in saliva, which breaks starch down into sugar for the body to use for energy. Some people have saliva that’s loaded with amylase (up to 50 times more than others) and break down carbs more readily, hence the sugary taste. 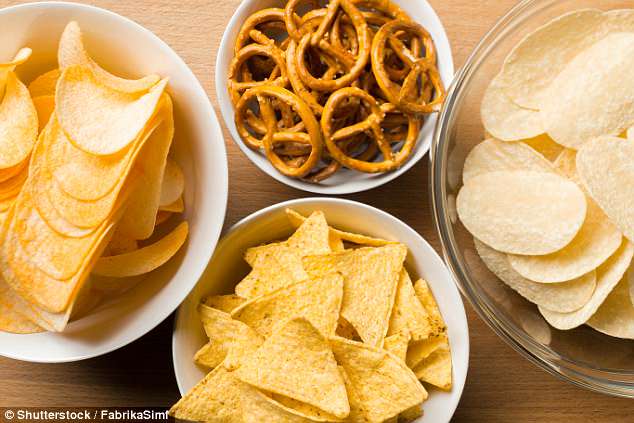 How does your body react? But if the cracker hasn’t changed taste after 30 seconds, then you should seriously consider eating a lower carb diet

If you notice the sweetness within 0 to 14 seconds, your body processes carbs efficiently for use as energy — you can have 250g of carbs a day (roughly four slices of wholewheat bread).

If it takes 15 to 30 seconds, you can have 175g of carbs a day (around three-and-a-half slices of wholewheat bread).

More than 30 seconds, you’re not a great processor of carbs so the body is less able to use the excess as energy, and so stores it as fat. So you can have just 125g of carbs a day (around three slices of wholewheat bread).

When I did the test, it took me 34 seconds to taste the sweetness — unsurprisingly, given my history of weight gain.

CUT BACK ON BEIGE AND WHITE CARBS

‘Beige’ carbs and ‘white’ carbs are the bad carbs and we eat far too much of them. Beige carbs are those in foods with lots of starch, such as potatoes, pasta, rice and white bread.

White carbs are found in sugary foods such as fizzy drinks, sweets and processed and refined foods including cakes and biscuits.

The problem is that most of the starch and sugar in bad carbs are broken down into glucose for energy. If you eat too much, the glucose is stored as fat.

But there are some carbs we’re not getting enough of — ‘green’ carbs. These are the dietary fibre found in fruit and veg, which releases energy very slowly. It’s good for our gut and doesn’t tend to make us fat.

Most starchy carbohydrates — such as potatoes and white bread — are easily and quickly digested. But about 5 per cent of it is far less digestible: it gets right through the stomach to the bowel.

We call this ‘resistant starch’. This type of carbohydrate is particularly bountiful in high-fibre foods such as lentils, beans and unprocessed whole grains. 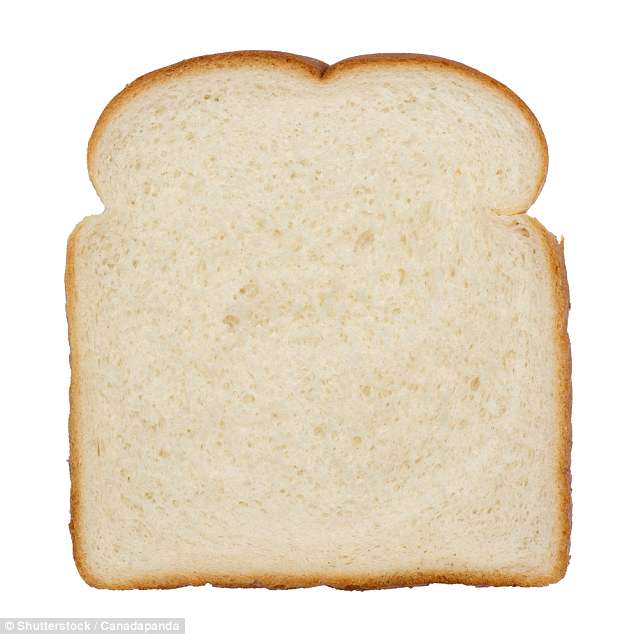 Slice of life: Scientists have discovered that cooking and cooling turns some of the beige and white carbs into resistant starches

Resistant starch feeds the growth of beneficial bacteria in the bowel. These bacteria in turn produce chemicals that prevent diseases such as cancer.

This explains why eating the recommended 30g a day of dietary fibre can reduce your chances of bowel cancer by 30 per cent.What’s more, these resistant starches have another key benefit — our bodies take only around half the calories from them.

RE-HEAT PASTA TO MAKE IT ‘GOOD’

You can turn ‘bad carbs’ into good ones. Scientists have discovered that cooking and cooling turns some of the beige and white carbs into resistant starches. The effect works best if you reheat carby foods such as pasta, rice and potatoes (make sure everything, especially rice, is piping hot).

What happens is that when the food is cooked and then cools down, fats and oils in the surrounding food attach themselves to the starch molecules, which makes them harder to digest.

So when you pop last night’s lasagne into the microwave the following day, you’re doing your health a favour. Yes, it is all right to eat bread! 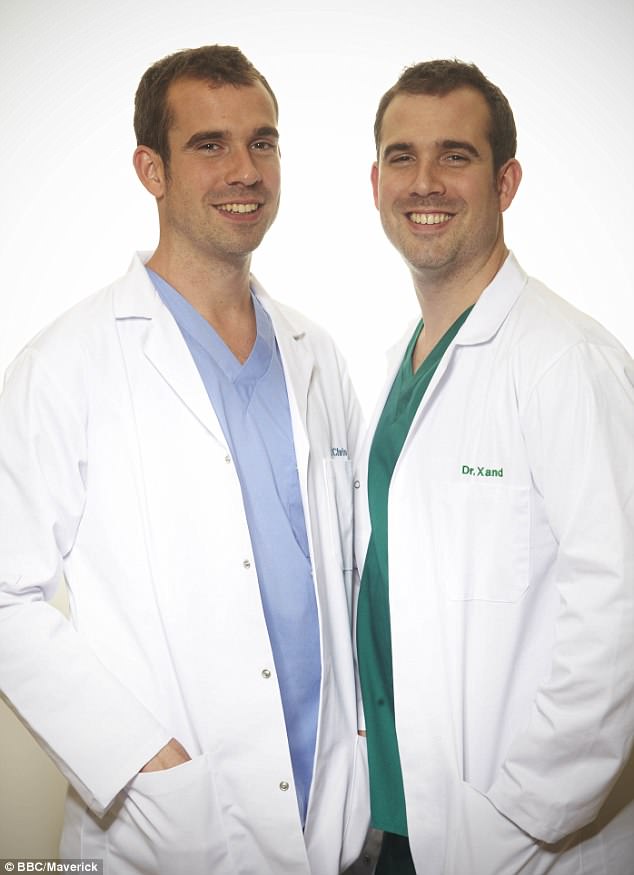 But you should switch from mass-produced breads to rye bread or stoneground wholemeal.

These are still deliciously bready but are much better for your weight and gut health — and keep you feeling fuller for longer. Sixty per cent of the bread we eat is white. It’s full of starch that turns into fat-producing glucose before it reaches your bowel.

However, stoneground wholegrain and rye breads contain the fibrous resistant starch that our bodies struggle to break down into glucose, and which instead feeds our gut bacteria.

But check the sugar content on the packaging of wholemeal breads because some large brands add sugar to counteract the bitterness of the whole grain.

EAT WHITE BREAD FROM THE FREEZER

Many of us maintain that only white bread will do when it comes to toast. If you must have it, there is a way of making it a little healthier (though it’s still not as good as wholemeal or rye).

And that’s to freeze your white bread first. Then stick it in the toaster straight from the freezer.

Freezing turns ordinary starch carbs into resistant starch, so your body gets far fewer calories from the bread. In effect, the resistant starch feeds your gut bacteria not you.

Carb-laden sports drinks claim to give you extra energy to exercise, but do you need them?

For the TV programme, I completed two gruelling half-hour time trials on an exercise bike. Each time I swilled my mouth with water or sugared water. But I didn’t swallow any of it.

Just rinsing my mouth with sugared water enabled me to cycle 600m more than with water alone.

That’s a massive difference. And it comes down to a brain trick. Sugary sports drinks prompt receptors in your mouth to tell your brain to expect a burst of carbs. Your brain then tells your body it’s OK to expend more energy, because fresh sugary carbs are on their way.

But you don’t have to swallow the liquid to get this effect. And just a solution of sugar in water will do just fine.

HOW CARBS CAN HURT FERTILITY

Recent research shows that overconsumption of refined ‘bad’ carbs can lead to fertility problems. We’re still in the process of discovering precisely how these mechanisms work, but Grace Dugdale, a reproductive biologist and researcher at the Leeds Centre for Reproductive Medicine, told me that if you eat lots of refined carbs, they rapidly convert into blood sugar and create spikes of energy that damage the mitochondria — the batteries that provide power for the cells in eggs and sperm, which are really important for their quality.

SMALL STEPS FOR A BIG DIFFERENCE

A few of the bigger changes I’ve made include:

– Making a big pot of porridge that I reheat in batches so it’s full of resistant starch;

– Buying my bread from a baker and getting them to slice it — making one trip per month — and then freezing it.

– Swapping good carbs for bad not only slims you down but improves your blood-sugar levels, crucial for beating diabetes — without making you hungry or miserable.