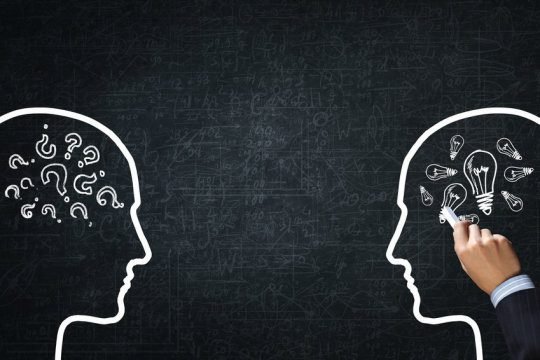 Detecting patterns is an important part of how humans learn and make decisions. Now, researchers have seen what is happening in people’s brains as they first find patterns in information they are presented.

Findings showed that the brain processes pattern learning in a different way from another common way that people learn, called probabilistic learning.

Researchers showed study participants 50 series of 12 images that included various combinations of three photos — a hand, a face and a landscape — sometimes in a pattern and sometimes in a random order. Participants were in an MRI machine that showed what parts of their brain were active as they chose what photo they thought was coming up next.

“We could see what parts of the brain were activated when participants figured out that there was a pattern — or realized that there was no pattern,” said Ian Krajbich, co-author of the study and assistant professor of psychology and economics at The Ohio State University.

Krajbich conducted the research with Arkady Konovalov, a postdoctoral researcher at the University of Zurich who received his PhD at Ohio State. The study appears in the journal Neuron.

Humans try to detect patterns in their environment all the time, Konovalov said, because it makes learning easier. For example, if you are given driving directions in an unfamiliar city, you can try to memorize each turn. But if you see a pattern — for example, turn left, then right, then left, then right — it will be easier to remember.

“We realized that not much was known about how humans figure out these rules,” Konovalov said.

The study involved 26 adults. Each photo they were shown began as a scrambled image that was revealed over a period of three seconds.

They hit a button as soon as they thought they knew which one of the three images was being presented. The object was to select which image was being shown as quickly as possible. Participants earned money for their correct answers and the faster they responded, the more they earned.

“If they don’t know what image is coming next, they have to wait a while and that is costing them money,” Krajbich said. “But once they figured out a pattern, they responded more quickly and we could see how that was reflected in their brains.”

Scientists had long studied a different kind of learning model, which they call probabilistic.

In the probabilistic model, people learn by determining the probability of an event happening after some other event. For example, you might learn that your favorite sports team usually wins two out of three of its games after a loss.

But that model doesn’t explain pattern learning, Krajbich said. With patterns, you know that a particular event is going to happen at a specific point in time.

“People in our study aren’t just predicting the odds of which photo will show up next. They are learning patterns and developing rules that guide their decision and make them faster and more accurate,” Konovalov said.

Probabilistic and pattern learning differ in how they engage the brain, Krajbich said.

In this study, the researchers found different parts of the brain were active depending on two kinds of uncertainty that the participants faced.

One kind of uncertainty was the question of which image was coming next. Findings showed, not surprisingly, that the same parts of the brain were involved for this task that earlier studies had found were involved in probabilistic learning, Krajbich said.

The other kind of uncertainty concerned whether there was a pattern in the images presented. As the participants worked out this question, a different part of the brain — the ventromedial prefrontal cortex — was activated.

This part of the brain has been shown in other research to be associated with reward.

“One interpretation is that people may be getting a sense of reward for figuring out whether there is a pattern or not. We don’t know that for sure yet, but it is plausible,” Krajbich said.

The hippocampus was another part of the brain that was particularly active when participants were figuring out patterns. “We found that people who had more hippocampal activity were faster learners,” Krajbich said.

Overall, the study showed that pattern learning is treated differently in the brain from probabilistic learning.

“The brain is keeping track of more things than we previously thought,” Krajbich said. “It isn’t just about predicting what is coming next. It is looking for rules to help predict better and faster.”