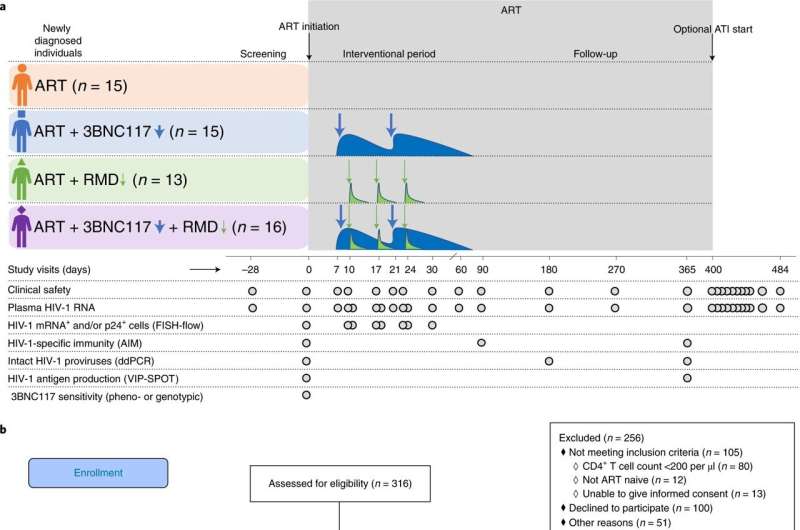 For around 40 years, scientists all over the world have been unsuccessfully trying to find a cure for HIV, but now a team of researchers from Aarhus University and Aarhus University Hospital have apparently found an important element in the equation.

So says Dr. Ole Schmeltz Søgaard, Professor of Translational Viral Research at Aarhus University, who is the senior author of an innovative study that has just been published in the journal Nature Medicine.

“This study is one of the first to be carried out on human beings in which we have demonstrated a way to strengthen the body’s own ability to fight HIV—even when today’s standard treatment is paused. We thus regard the study as an important step in the direction of a cure,” he says.

The study was conducted in close collaboration with researchers from the UK, U.S., Spain and Canada.

While it has not been possible to find a cure for or a protective vaccine against HIV, today’s standard treatment is very effective at keeping the disease at bay.

Today, people with HIV are offered so-called antiretroviral therapy, which suppresses the amount of virus in the blood and partially restores the immune system.

This is because HIV hides in the genome of some of the body’s immune cells, and it is precisely these cells that the intervention is targeting in the Danish-led research project.

In the study, the researchers studied the effects of two types of experimental medicine on people recently diagnosed with HIV.

The results of the study are very encouraging, says Dr. Jesper Damsgaard Gunst from Aarhus University Hospital—lead author and another of the main driving forces behind the trial.

“Our study shows that newly diagnosed people with HIV who are given monoclonal antibodies together with their usual HIV medicine show a faster decrease in the amount of virus after the treatment starts and develop better immunity against HIV, and their immune system can partially or completely suppress the virus if they are taking a break from their usual HIV medicine,” he explains.

The theory behind the experiment is that the monoclonal antibodies help the immune system to recognize and kill the infected cells.

In addition, the antibodies also bind in large complexes to viruses that end up in the lymph nodes, where they amongst other things stimulate the ability of certain immune cells to develop immunity to HIV. This way the body may be able to control the spread of virus and “protect” itself from the harm induced by HIV infection.

Previous clinical trials with experimental medicines have not shown any significant effects on the persons’ immunity to HIV or the immune system’s ability to suppress the infection if the standard treatment is paused.

Despite the remarkable results, however, there is still some way to go before we will see a cure for HIV, emphasizes Dr. Søgaard.

First, the researchers need to find a way to optimize the treatment and amplify its effect.

The Danish study has already attracted considerable attention abroad and has boosted interest in experimental trials in people with a newly diagnosed HIV infection.

Amongst other things, the US Department of Health recently earmarked a large pool of money for research in this area.

Moreover, the Bill and Melinda Gates Foundation and a large research network have taken the initiative to undertake a successor to the Danish study in Africa.

Dr. Søgaards research group is working on a large study to be carried out across Europe to optimize the new experimental treatment.