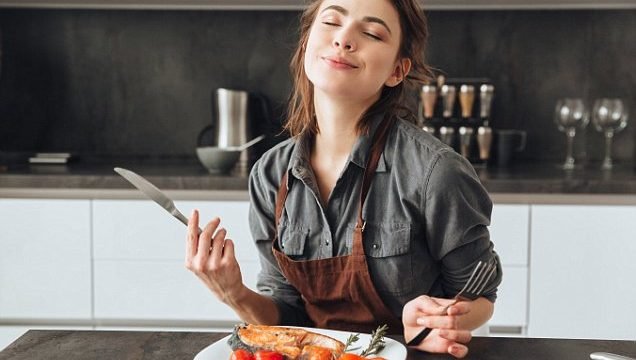 Could YOU eat all your meals before 3pm? Study finds the extremely restricted schedule lowers blood pressure, boosts metabolism, AND curbs your late night snack cravings

Eating all your meals before 3pm lowers blood pressure, curbs diabetes – and even makes you less hungry for snacks throughout the day.

That is according to a new small study, which found that this uniquely early cut-off point helped overweight men to lose weight and boost their health in almost every way.

The study by the University of Alabama at Birmingham was the first to clinically test this form of intermittent fasting known as early time-restricted feeding (eTRF) in humans.

The team’s aim was to identify why fasting diets seem to boost metabolism and health – whether it is due to consuming fewer calories or stopping food-consumption early.

Their results seemed to show, unequivocally, that the cut-off point is the key. The study by the University of Alabama, Birmingham was the first to clinically test this form of intermittent fasting known as early time-restricted feeding (eTRF) in humans

According to the lead author Professor Courtney Peterson, PhD, it likely hinges on the fact that the fasting diet follows our natural circadian rhythm (or, biological clock).

In a healthy person, levels of cortisol (the stress hormone) peak at around 8am, giving us a rush of energy to wake us up (in theory). Those levels drop to their lowest at 3am the next day, before rising back to its peak five hours later at 8am again.

Ideally, this 8am peak will be triggered by exposure to sunlight, if not an alarm. When it does, the adrenal glands and brain will start pumping adrenalin.

By mid-morning, the cortisol levels start dropping, while the adrenalin (for energy) and serotonin (a mood stabilizer) keep pumping.

At midday, metabolism and core body temperature ramp up, getting us hungry and ready to eat.

After noon, cortisol levels start their steady decline. Metabolism slows down and tiredness sets in. Gradually the serotonin turns into melatonin, which induces sleepiness. Our blood sugar levels decrease, and at 3am, when we are in the middle of our sleep, cortisol levels hit a 24-hour low.

‘If you eat late at night, it’s bad for your metabolism,’ Professor Peterson said.

‘Our bodies are optimized to do certain things at certain times of the day, and eating in sync with our circadian rhythms seem to improve our health in multiple ways.

‘For instance, our body’s ability to keep our blood sugar under control is better in the morning than it is in the afternoon and evening, so it makes sense to eat most of our food in the morning and early afternoon.’

In the study, eight men with prediabetes spent five weeks on an eTRF diet, then another five on a ‘typical’ American eating schedule.

On the fasting diet, they ate breakfast between 6.30am and 8.30am each morning, and ate dinner no later than 3pm, six hours later. They then fasted for the rest of the day — which amounted to about 18 hours.

On the typical American diet, they ate their meals over a 12-hour period.

The results were stark.

The eTRF diet dramatically improved their sensitivity to insulin, protecting them from dangerous spikes in blood sugar levels.

It also lowered their blood pressure and oxidative stress levels.

To the participants’ surprise, it also drastically reduced their cravings for snacks in the evening.

While the study was small, Professor Peterson said it broadened our understanding of the idea that timing could be more important than calories when it comes to our metabolic health, and all the things that that impacts.

These findings, specifically, suggest that eating early in the day may be a particularly beneficial form of intermittent fasting.

‘However, we didn’t know whether these effects are simply because people ate less and lost weight.’

Professor Peterson said she hopes the study will trigger more people to think about how essential it is for their health to follow their circadian rhythm.

‘Our data also indicate that our feeding regimen has to be synchronized with the circadian rhythm and our biological clock,’ said Dr Eric Ravussin, director of the Nutrition Obesity Research Center at the Pennington Biomedical Research Center, and a collaborator on the study.

Peterson notes that her research sheds light on why intermittent fasting approaches that limit eating to the late afternoon and evening may have failed to find any benefits.

These findings could lead to better ways to help prevent Type 2 diabetes and hypertension.

In light of these promising results, Peterson says more research is needed on intermittent fasting and meal timing to find out how they affect health and to figure out what types of approaches are achievable for most people.