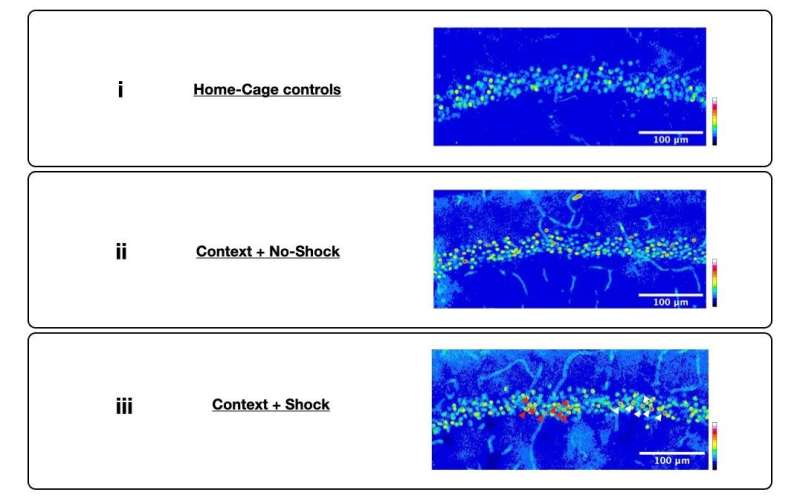 Although we know that groups of cells working together in a specific brain region—the hippocampus—are vital for making, storing, and retrieving many types of memories, we still don’t have a clear idea of how these cells are organized.

Researchers in Japan have recently identified an important piece of this puzzle; in rats, fear-based memories were made when cells in the hippocampus formed discrete clusters, suggesting that memory formation requires cells to be organized in a specific arrangement. The research also indicates that sleep is important for the stability of these cell clusters.

Most previous studies looking at the cellular organization of memories have used a technique called electrophysiology, which is based on brain activity that brain cells use to talk to one another. A major limitation of this technique is that it only allows the examination of a relatively small number of cells at a time, and within a limited area. Researchers from the University of Tsukuba used a different approach.

“A technique called ‘immediate early gene imaging’ allowed us to visualize cells that were active at a specific time within the entire rat hippocampus, rather than just a small part of it,” explains Dr. Jiyeon Cho, lead author of the study. “We were able to see that, when memories were being formed, groups of active cells were organized in small, compact clusters throughout the hippocampus.”

The researchers had previously used the same technique to identify similar small clusters of active cells during the formation of two other kinds of hippocampal-dependent memory. Together, their findings suggest that memory-encoding cells in the hippocampus need to be organized in a certain way in order to form memories.

Because sleep is vital for memory formation, the research team then decided to examine whether sleep had any effects on cluster organization. When rats were allowed to sleep after being trained to remember a fear-inducing stimulus (a small electric shock to the paws), they had much stronger memories of the fear, and there was also more clusters of active cells in their hippocampi.

“Together, our results demonstrate that the organization of cell clusters in the hippocampus is important for memory formation, and suggest that sleep helps to stabilize cell clusters to improve memory,” says senior author of the study Professor Constantine Pavlides. “These findings take us one step closer to understanding exactly how memory works.”

A better understanding of memory at a cellular level and how the network in the brain works together to perform memory may help us to improve the quality of life one day of millions of people living with dementia and other memory-related disorders, which are currently very difficult to treat.