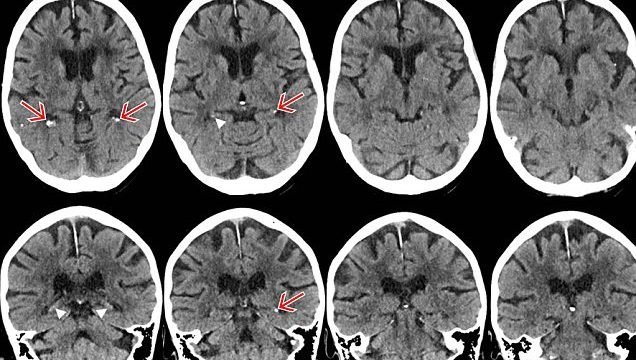 Smoking clogs up parts of the brain crucial for memory – increasing the risk of dementia, study finds

Smoking clogs an area of the brain crucial to memory, according to new research.

It causes a build up of calcium in the hippocampus – gray matter that stores both our recent experiences and those that happened a long time ago.

A study of almost 2,000 older people found those who smoked – or were diabetic – were more likely to have these ‘calcifications’ on CT scans.

The finding may explain the link between cigarettes and dementia – and provide another reason to stub out the habit. A Dutch study of almost 2,000 older people found those who smoked – or were diabetic – were more likely to have these ‘calcifications’ in their hippocampus on CT scans (see the arrows pointing to calcium clumps)

The damage smoking does to the heart and lungs is well documented. But less is known about its affect on the brain.

This is despite heavy smokers being twice as likely to develop the devastating neurological illness. The potential mechanism has been unclear – until now.

Alzheimer’s disease, the most common type of dementia, is associated with damage to the hippocampus.

It was believed calcification of blood vessels may be related to vascular problems that contribute to cognitive decline. But previous research was limited.

Lead author Dr Esther de Brouwer, a geriatrician at the University Medical Centre in Holland, said: ‘We know calcifications in the hippocampus are common, especially with increasing age.

‘However, we did not know if calcifications in the hippocampus related to cognitive function.’

The study, published in the journal Radiology, used state of the art brain scans to explore the role of hippocampal calcifications in dementia – enabling better distinction from nearby structures like the choroid plexus.

Dr de Brouwer said: ‘A multiplanar CT scan makes it possible to see the hippocampus in different anatomical planes; for example, from top to bottom, right to left and front to back.

She said dementia is a major public health problem that affects tens of millions of people worldwide.

Her team studied 1,991 patients with an average age of 78 who had visited a memory clinic at a Dutch hospital between 2009 and 2015, looking at the link between vascular risk factors like high blood pressure, diabetes and smoking and brain calcifications.

They also assessed the effects of these abnormalities in the hippocampus on mental function.

The participants were given cognitive tests and underwent CT scans that identified 380 – about a fifth – as having the calcium plaques.

While the study was not designed to conclusively determine if smoking and diabetes increase the risk of hippocampal calcifications, the results strongly suggest they do.

Dr de Brouwer said: ‘We do think smoking and diabetes are risk factors. In a recent histopathology study, hippocampal calcifications were found to be a manifestation of vascular disease.

There was no link between the presence and severity of hippocampal calcifications and cognitive function.

This surprised the researchers and there were several possible explanations, said Dr de Brouwer.

‘The hippocampus is made up of different layers, and it is possible the calcifications did not damage the hippocampal structure that is important for memory storage,’ she said.

‘Another explanation could be the selection of our study participants, who all came from a memory clinic.’

The researchers plan to carry out additional studies in different groups of people to better understand possible links between these calcifications and cognitive problems.

A previous long term study found heavy smokers – those who smoked at least 40 cigarettes or two packs a day – were twice as likely to develop dementia.

The Alzheimer’s Society says: ‘There is strong evidence that smoking can increase your risk of developing dementia.

‘Not everyone who smokes will get dementia, but stopping smoking is thought to reduce your risk back down to the level of non-smokers.

‘Some reasons behind this include the fact that the two most common forms of dementia, Alzheimer’s disease and vascular dementia, have both been linked to problems with the vascular system (your heart and blood vessels).

‘It is known that smoking increases the risk of vascular problems, including via strokes or smaller bleeds in the brain, which are also risk factors for dementia.

‘In addition, toxins in cigarette smoke increase oxidative stress and inflammation, which have both been linked to developing of Alzheimer’s disease.’

Overall, smokers are said to be 50 percent more likely to get dementia. There are 850,000 people in the UK living with the condition, a figure set to rise to a million by 2025. In the US, 5.5 million have dementia. There is no cure.