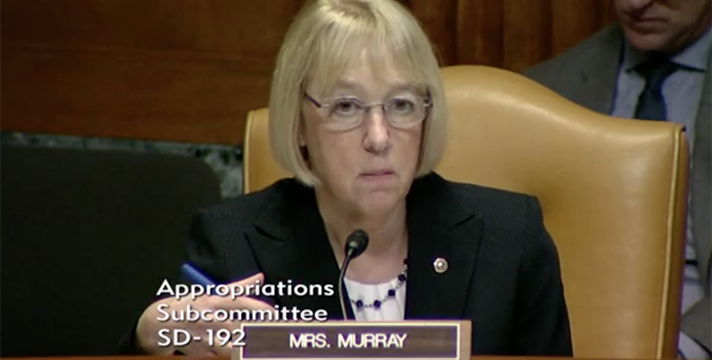 Sen. Patty Murray, D-Washington, questioned the current progress of the initial Department of Defense EHR rollout at four test sites in the Pacific Northwest and suggested that tech issues are putting patient lives at risk.

“I was very concerned when I started hearing disturbing reports about the rollout plagued by technical problems," Murray said. "These issues have made a significant morale impact on the practitioners in my state, not to mention serious concerns about putting patients’ lives at risk.”

“I heard issues about inaccurate prescription submissions, misdirected patient referrals, long waits to resolve problems in the program that were identified by the clinicians, and some practitioners reported that they couldn’t even open the program in a timely manner,” she added.

Also troubling Murray were reports that staff have been inadequately trained to use the system and “fear they may have to take money out of their own operating budget to pay for that training.”

In her defense, Cummings told Murray that DoD just completed an eight-week optimization period that began in January. Officials worked to resolve trouble tickets or user complaints, along with support requests from users.

“When we began the optimization period, we had about 7,000 trouble tickets. Out of those 7,000 tickets, we’re in the process of closing about 1,000 of them,” Cummings said. “Depending on the level of complexity and how much work needs to be done directly with the user, those changes will be made over the remainder of the year.”

But Murray continued to press the point: Those issues “were identified long before deployment and should have been addressed prior to people all of a sudden using it when people’s lives are at stake.”

Cummings said that the four pilot sites are meant to be a starting point to assess the system and infrastructure before full deployment. Both the lessons learned and user feedback will help DoD “make adjustments to software, training, and workflows and be confident the changes are positive and impactful.”

DoD has maintained the initial deployment has been successful, despite numerous reports that pointed out user complaints and concerns over patient safety. During that period, a DoD official told Healthcare IT News the assessment period was planned and that the issues were to be expected given the complexity of the rollout.

Project managers have been addressing those concerns and DoD had expected that they would need to make adjustments to the system. At the moment, the agency is in a critical review stage.

“Successful deployment of MHS Genesis to our four IOC sites was an important milestone in implementing what will be the largest integrated inpatient and outpatient EHR in the United States,” Cummings said.

Cummings also told the committee on Wednesday that deployment of MHS Genesis will continue in 2019. Full deployment is expected by 2022.

“I just don’t want everybody to think this is happy-dappy, rosy,” said Murray, “because there are a lot of issues that need to be addressed and we need to stay on top of this.”