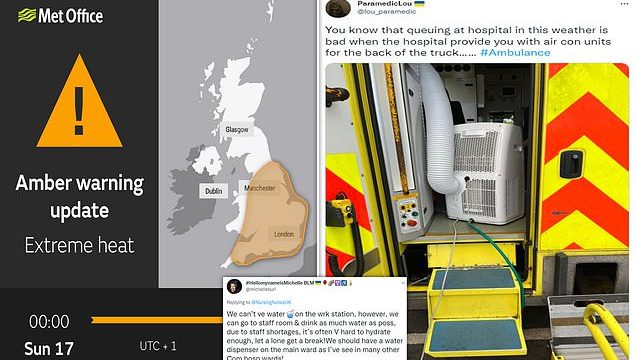 Nurses are being banned from drinking water because senior managers wrongly believe it poses an infection risk.

It comes as the UK grapples with a heatwave that threatens to send temperatures above 40C for the first time ever.

A survey of nurses found almost four in 10 had been forbidden by senior managers from drinking while working in areas like wards.

The main reason for nurses not being allowed water, or having their bottles thrown away in their station, is the age-old belief it is against ‘infection control policies’.

But no such guidance exists, NHS bosses confirmed today, despite the same issues cropping up every heatwave. There is no proof drinking water from bottles or cups poses an infection risk.

Nurses have also been told off for drinking on wards because it looks unprofessional in the past.

Amid the current heatwave, nurses say they’ve also been forbidden them from using fans to keep cool. The reason for this ban is unclear.

Ambulance crews desperate to cool down have posted images of them plugging in aircon units while queuing outside hospitals waiting to handover patients.

Temperatures are only set to soar over the coming days, with the mercury predicted to exceed 35C (95F) from Sunday to Tuesday in parts of England.

Nurses have also said staffing shortages, caused by a spike in virus infections, means they were struggling to take a break and get enough water.

NHS England has said trusts should allow nurses to drink at their workstations — not just their breaks — but did not comment on if they were allowed to use fans. 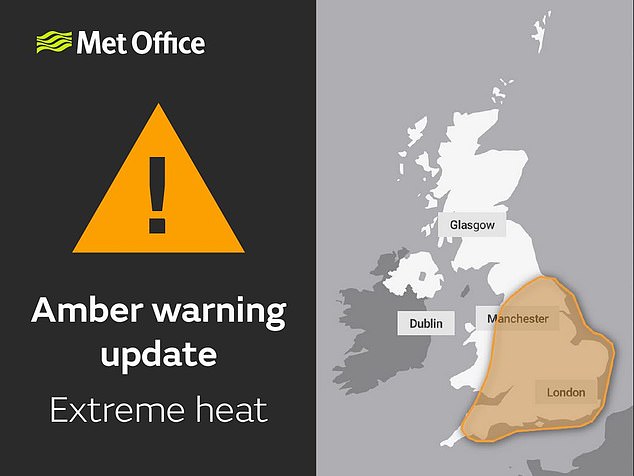 An ‘amber’ extreme heat Met Office warning covering much of England and Wales on Sunday, Monday and Tuesday says there could be a danger to life or potential serious illness, with adverse health effects not just limited to the most vulnerable 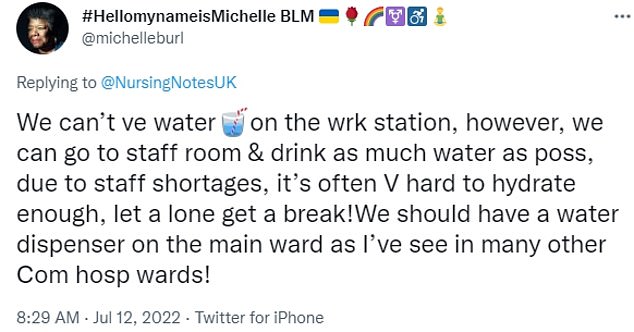 One nurse, Michelle from the East Midlands, said she was told not to drink at her work station and instead rehydrate in the staff room if she got a break 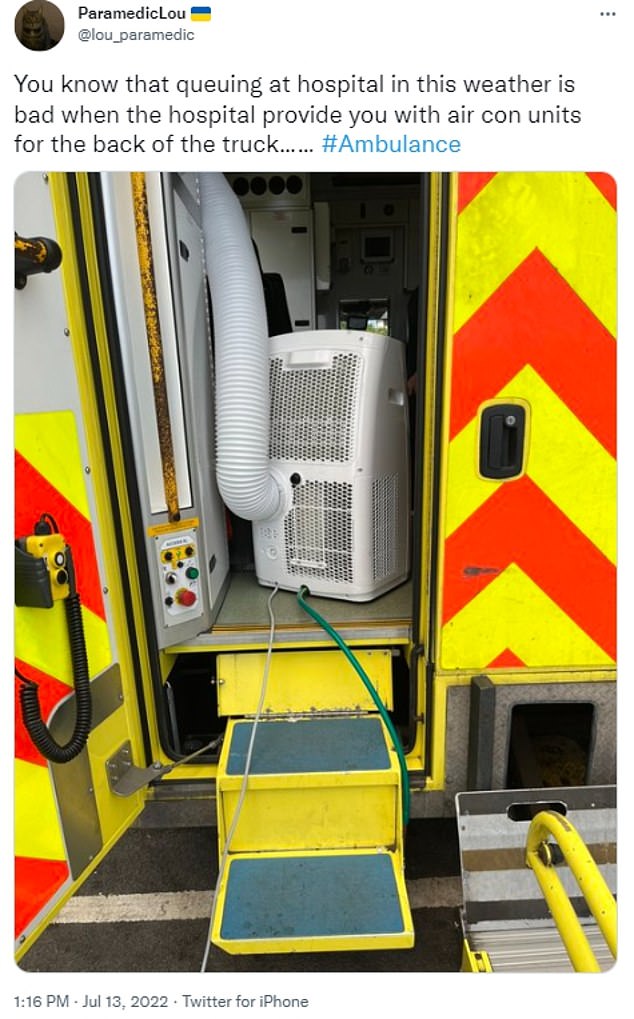 All ambulance trusts in England were yesterday put on the highest alert as Covid threatens to cause a summer of disruption.

Rising Covid staff absences, the escalating heatwave and ongoing delays in handing over patients to A&E have heaped extra pressure on ambulance services which were already in crisis mode.

All 10 trusts have been put on a level four alert known as Resource Escalation Action Plan (REAP) 4, which signals they are under ‘extreme pressure’.

As part of this, patients with emergencies that are not life threatening could be told to make their own way to hospital or seek alternative care — or face even longer waits than usual.

It comes amid a fifth wave of Covid infections across Britain, with 2.7million (one in 24) people estimated to have been infected in the most recent week.

The rise of two mild but highly infectious Omicron sub-strains have caused daily Covid hospital admissions to rise to a near 18-month high, with around 2,000 people being hospitalised with the virus every day.

But only a fraction of these are primarily sick with the virus.

In a post on Twitter, an NHS nurse in the East Midlands called Michelle, said she was only allowed to drink water in the staff room while on a break.

‘We can’t have water on the workstation,’ she wrote.

‘However, we can go to staff room and drink as much water as possible.’

Her comments come just a day after  a survey of 400 nurses found 38 per cent had been banned from drinking water while working in areas like wards.

One nurse told Nursing Notes, which carried out the poll: ‘It seems a bit hypocritical.

‘We are told to encourage our patients to stay hydrated, but matron comes around and throws away our water bottles from the nurses’ station.’

An NHS spokesperson told MailOnline that health staff should not be restricted from drinking water at their stations.

‘It is vital that all NHS staff and patients are able to drink water and stay hydrated particularly in hot weather whether at nursing stations, in staff rooms or other convenient locations,’ they said.

Nurses have complained for years about being banned from drinking water during heatwaves.

The situation prompted both NHS England’s chief nurse Ruth May and the official health watchdog the Care Quality Commission to issue statements that NHS staff are allowed to drink on shift.

During last year’s heat wave, Ms May tweeted: ‘In my opinion nurses should be able to drink fluids at nurses’ stations.’

Being dehydrated can impact a person’s cognition and judgment, meaning patients could also potentially suffer from NHS staff not being able to drink.

Royal College of Nursing national officer, Leona Cameron, said: ‘All employers, including hospitals and other care settings, have a legal duty to provide their staff with readily accessible drinking water.’

‘This is especially important during a heatwave, where staff should be actively encouraged to drink plenty of water to prevent illness.’

Another nurse from London called Vanesia said staff in her workplace had been forbidden from turning fans on despite the current heat.

‘Can you imagine, in this heatwave, nursing staff are not allowed to turn fans on,’ she said.

‘The wards are very hot, patients are hot, no air con apart from the doctor’s office.’

Some hospitals and care homes banned the use of fans during the Covid pandemic over fears they could spread the virus through the air.

NHS England refused to clarify if this was now a national infection prevention policy, or if like mask requirements for staff and visitors, fan use was being left to individual trusts to decide.

Another NHS nurse, this time from London, claimed staff had been forbidden from using fans

Britain’s ongoing ambulance crisis has also been hit by the heatwave as patients wait for hours in vehicles outside hospitals waiting to be handed over to medics.

Today, a paramedic called Lou posted a photo from Grange University Hospital in Wales, of the hospital hooking up a portable air conditioning unit to his ambulance as he queued to hand over a patient.

Some hospitals have already declared ‘critical incidents’ and every ambulance trust in England is on the highest level of alert, with patients already suffering up to 24-hour handover waits in A&E because of the heat.

One hospital reported an ambulance being delayed for 24 hours outside A&E on Monday evening.

Another trust, which runs the Queen Alexander Hospital, in Portsmouth, declared a ‘critical incident’ due to the weather and staff sickness.

London Ambulance Service urged the public to support it as the heat continues by only calling 999 in the event of a life-threatening emergency, keeping hydrated and staying out of the sun during the hottest periods of the day.

The hot weather is set continue with the Met Office issuing an amber ‘Extreme heat’ warning for much of England and Wales on Sunday, Monday and Tuesday.

They said the temperatures, which could hit highs of 38C could be a danger to life or potential serious illness

What are the potential impacts of extreme heat during amber warning?

The Met Office has issued an amber weather warning for extreme heat for the whole on Sunday, Monday and Tuesday, covering most of England and some of Wales.

The extreme heat warning system ranges from yellow to red and indicates how likely and how much of an impact the weather will have on public life. An amber warning states that temperatures are likely to have a high impact.

The warning for Sunday states: ‘Some exceptionally high temperatures are possible during Sunday and could lead to widespread impacts on people and infrastructure’.

Forecasters say the heatwave could impact the health of everyone – not only the vulnerable – while it could also impact electricity, gas and water supplies. Here is how it could impact different parts of daily life:

The Met Office says that delays and cancellations to rail travel are possible with ‘potential for significant welfare issues for those who experience even moderate delays’.

Network Rail has warned that services across the UK may be subject to speed restrictions to avoid tracks buckling, with South Western Railway and Heathrow Express among the operators warning of potential disruption. West Midlands Trains imposed a 20mph limits yesterday on the route between Stratford-upon-Avon, Leamington Spa and Kidderminster.

The Met Office says that delays on roads and road closures are possible during the heat alert period.

The RAC has urged motorists to ‘think carefully before they drive, and do everything they can to avoid a breakdown’. It says motorists should check the coolant and oil levels under the bonnet when the engine is cold.

It added: ‘If temperatures were to go as high as around 40c as some are predicting, then people should question their decision to drive in the first place.’

Hampshire County Council is preparing to deploy gritters in response to melting roads, saying that the machines will be spreading light dustings of sand which ‘acts like a sponge to soak up excess bitumen’.

Motorists who find tar stuck to their tyres are advised to wash it off with warm soapy water.

The Met Office has warned that air travel could also be disruption during the heat. This is because planes can become too heavy to take off in very hot weather due to reduced air density resulting in a lack of lift.

This happened during a heatwave in summer 2018 at London City Airport when some passengers had to be removed so the services become light enough to take off on the relatively short runway.

The Met Office has warned that a failure of ‘heat-sensitive systems and equipment’ is possible. This could result in a loss of power and other essential services, such as water, electricity and gas.

Hot weather can lead to high demand on the power network because people are turning on fans and air conditioning – and the heat can also lead to a drop in the efficiency of overhead power cables and transformers.

The Met Office says that ‘changes in working practices and daily routines will be required’ in the extreme heat.

There is no specific law for a maximum working temperature, or when it is too hot to work.

But employers are expected to ensure that in offices or similar environments, the temperature in workplaces must be ‘reasonable’. Companies must follow follow health and safety laws which include keeping the temperature at a comfortable level, known as ‘thermal comfort’; and providing clean and fresh air.

The Trades Union Congress says that during heatwaves staff should be allowed to start work earlier, or stay later, leave jackets and ties in the wardrobe and have regular breaks. It is also calling for an absolute maximum indoor temperature of 30C (86F) – or 27C (81F) for strenuous jobs – to legally indicate when work should stop.

The Met Office has said that adverse health effects could be ‘experienced by all, not just limited to those most vulnerable to extreme heat, leading to serious illness or danger to life’ during the amber warning.

In addition, charity Asthma and Lung UK has warned up to three million asthma sufferers could be affected by high pollen levels, so should use their inhalers.

Plans to cope with the heat, created by the NHS and UKHSA, say children should not do ‘vigorous physical activity’ when temperatures rise above 30C (86F).

Some sports days have been cancelled this week, while official advice suggests moving school start, end and break times to avoid the hottest points in the day.

Official word from the Government on how schools should respond to the heat could be sent later this week – but it may be left to headteachers to decide.