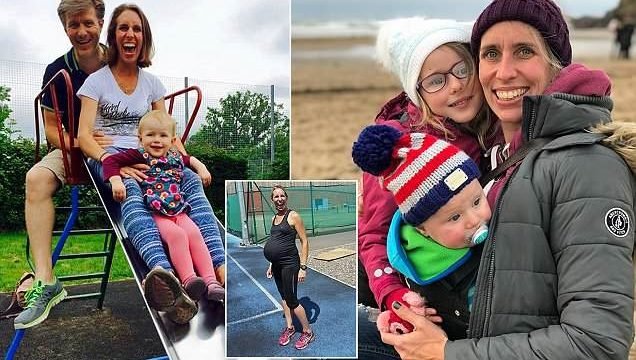 A new mum who suffered with incontinence for more than a year after giving birth was shocked to discover her bladder had prolapsed so far she could touch it.

After giving birth to her first child in 2013, Anna Curtis, 39, struggled to continue working as a personal trainer because urine would leak through her clothes when she exercised.

For 18 long months she was left feeling upset and embarrassed about her problem, which she assumed was a normal part of recovering from childbirth.

However, she realised it might be serious when she felt a lump in her genitals.

After visiting a urologist she was told the lump was her bladder – it had prolapsed so far it was starting to come out through her vagina.

Mrs Curtis began physiotherapy and monthly sessions helped her get the problem under control, and she gave birth to her second child last year.

Now, the fit and healthy mother-of-two is speaking out to encourage women to take care of their post-pregnancy bodies. 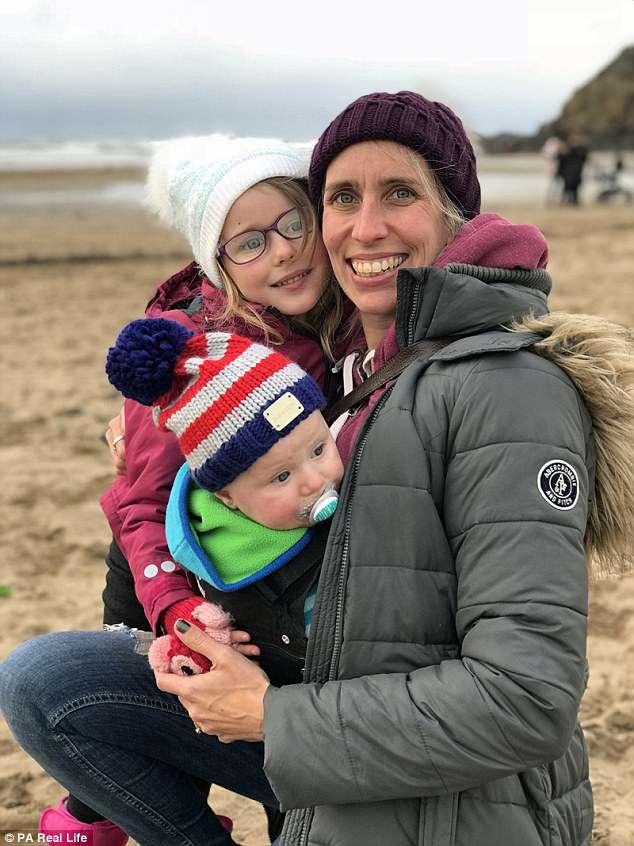 Anna Curtis, 39, is mother to Lauren, four, and Mattie, who was born in August last year 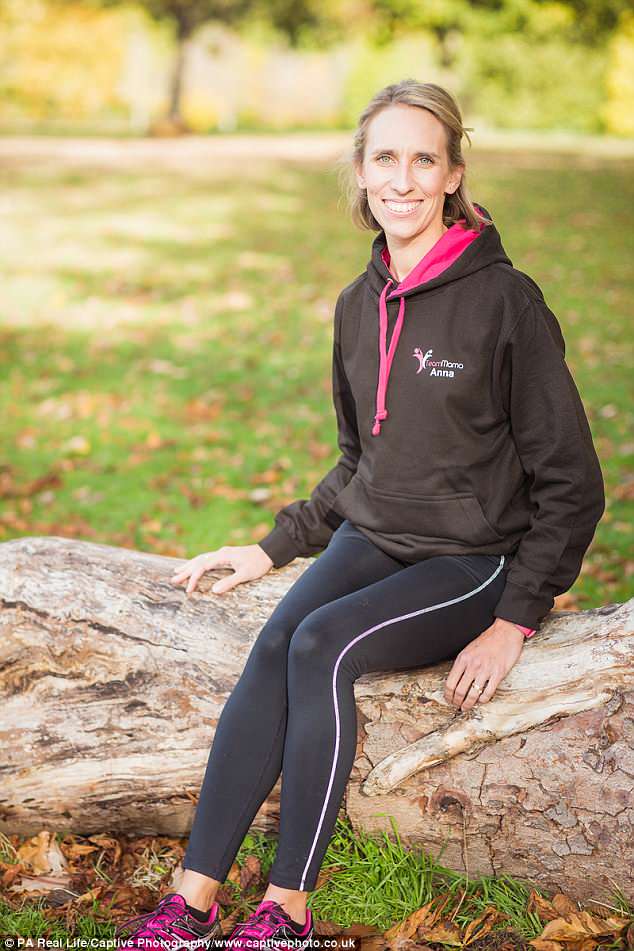 Mrs Curtis is a self-confessed fitness fanatic and exercised throughout her first pregnancy; she now works as a post-natal personal trainer

Gym bunny Mrs Curtis worked out throughout her pregnancy with daughter Lauren, now four, whom she had with husband Michael Curtis, 42, a network engineer.

But after giving birth she began ‘leaking’ urine every time she exercised – making her job as a personal trainer nigh on impossible.

At first Mrs Curtis, of Epsom, Surrey, thought her body was simply recovering from childbirth.

She was worried about the urine leaking, but realised something might be seriously wrong when she felt a lump in her vagina.

She said: ‘After my first gym class following Lauren’s birth, I leaked a little but thought it was just part and parcel of what my body had been through.

‘But it continued until the point where it wasn’t just when I exercised. At times, I’d be left very distressed when I leaked through my clothes.’

When her symptoms worsened over the course of 18 months, she was eventually told her bladder had prolapsed – when one or more of the organs in the pelvis slip out of place.

‘I could literally feel it in the shower’

‘I had this awful feeling of heaviness and I could literally feel it in the shower,’ she said.

During her textbook pregnancy with Lauren, Mrs Curtis continued to run and lift weights right up to the birth.

She delivered Lauren naturally at Epsom General Hospital on July 30 2013 then, eight weeks later, went to a mother and baby fitness class – but her bladder leaked afterwards. 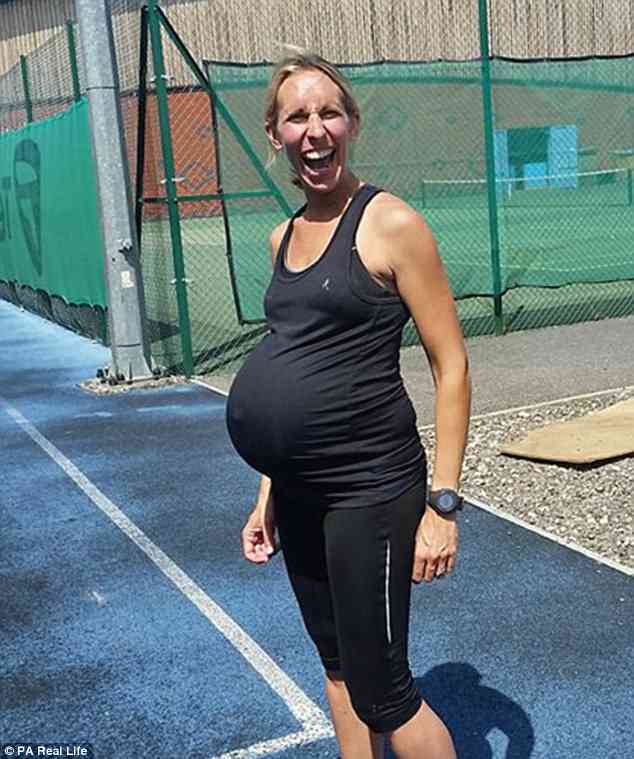 Mrs Curtis continued to run and lift weights ‘right up until the birth’ of her first child, Lauren, in 2013, but exercise became difficult when she suffered a bladder prolapse after she became a mother 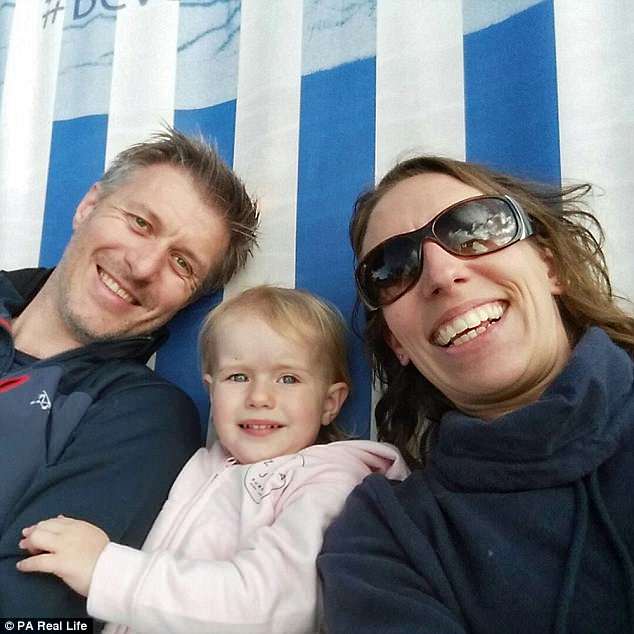 Mrs Curtis lives in Epsom, Surrey, with husband Michael Curtis (left). The couple are pictured with their first child, Lauren 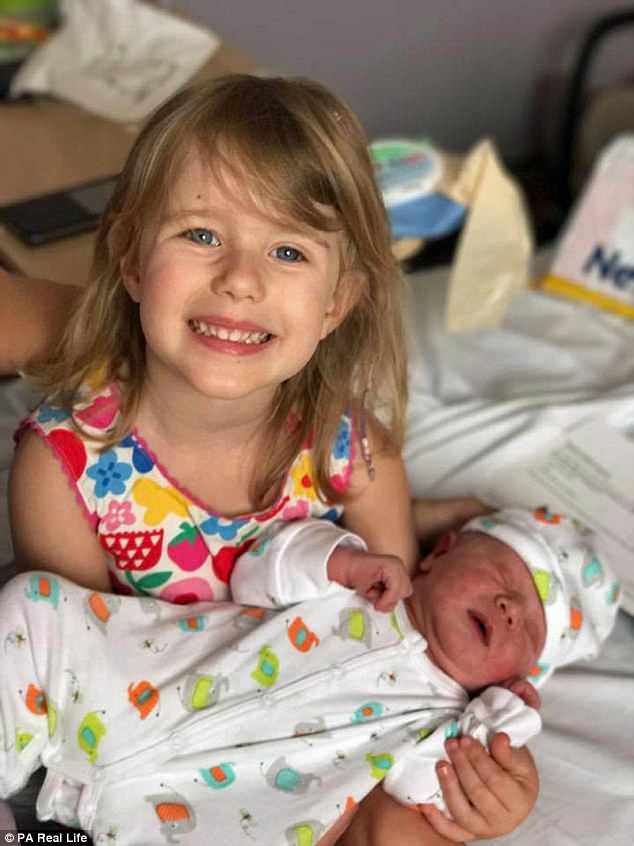 Lauren, the Curtis’s first child, holds her baby brother Mattie who was born in August 2017

WHAT IS A PELVIC ORGAN PROLAPSE?

Pelvic organ prolapse is when one or more of the organs in the pelvis slip out of position and bulge into the vagina.

Symptoms can include a heavy feeling in the lower abdomen, vaginal discomfort, a feeling of something coming down into the vagina, discomfort during sex, or problems urinating.

The condition is diagnosed with a short internal examination by a doctor.

Treatment varies depending on the severity of the condition, but may involve lifestyle changes,hormone treatment, vaginal pessaries (a supporting device) or surgery.

‘At the time, I wasn’t a post-natal personal trainer, so I didn’t know the dos and don’t of exercising after childbirth,’ said Mrs Curtis.

‘I’ve always been very fit, so I threw myself into it.

‘I almost felt I had something to prove.

‘For many women, the pressure to bounce back, lose that baby weight and be back in your size eight jeans comes from magazines and celebrities, but in my case it came from within.

‘Fitness has always been a passion of mine. I enjoy it – it reduces stress and it’s my way of being there for myself.’

Cautious, Mrs Curtis consulted her GP for advice, but says she did not get many answers at first.

She added: ‘Everyone thought it was just my body recovering, so I felt like I had to get on with things.’ 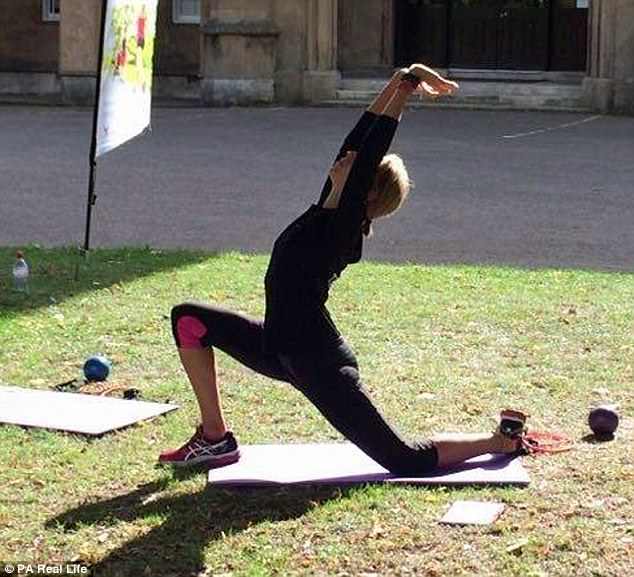 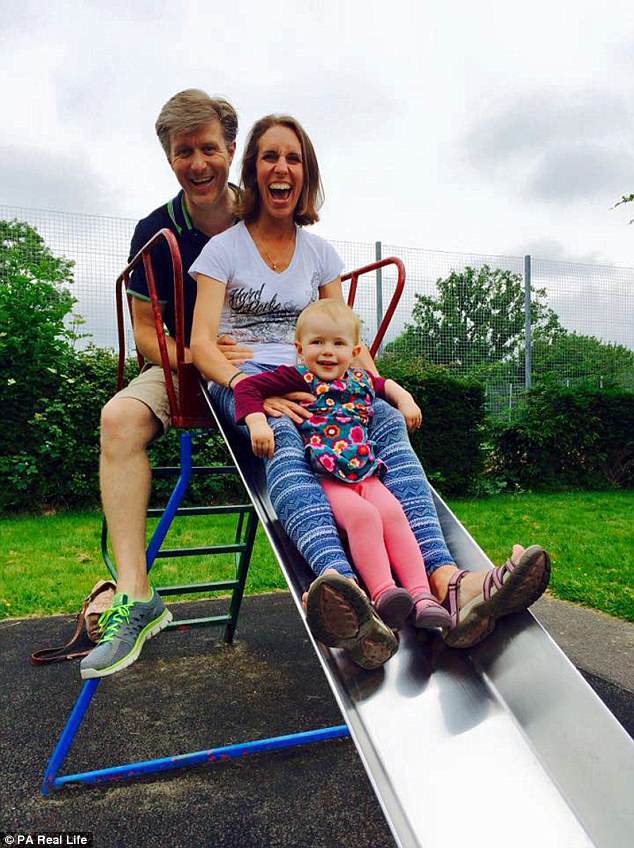 Monthly physiotherapy sessions have improved Mrs Curtis’s incontinence and helped get back to life as normal – she is pictured with husband, Michael, and daughter, Lauren 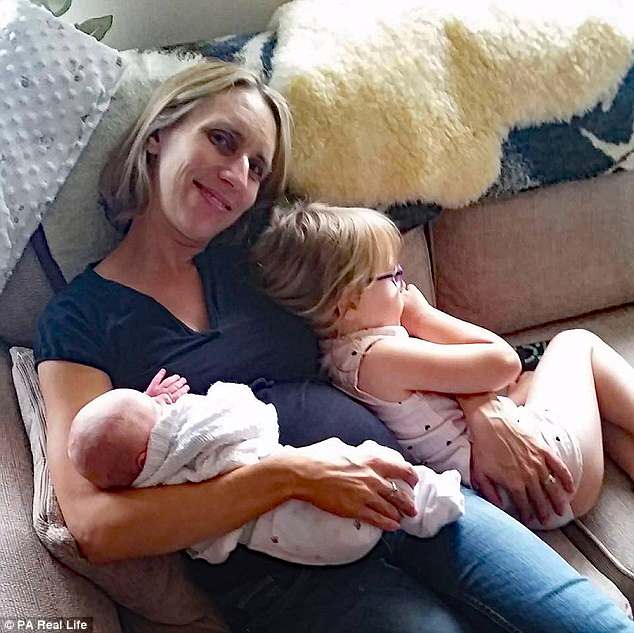 Mrs Curtis also suffered from diastasis, a condition in which a pregnant woman’s abdominal muscles separate, which can make them continue to look pregnant after giving birth

The exercise itself was no problem but, working out most days, her urinary incontinence worsened to the point where she struggled to teach.

She had to wear pads almost around the clock – even then having accidents, when urine would leak through her clothes.

Prolapse happens when organs in the pelvis slip out of place

Then a urologist diagnosed her prolapse, which happens when one or more of the organs in the pelvis – including the uterus, bowel or bladder – slip from their normal position and bulge into the vagina.

While not life-threatening, it can be incredibly uncomfortable. Since getting back to exercising, Mrs Curtis has set up her own post-natal physiotherapy classes called Team Mama 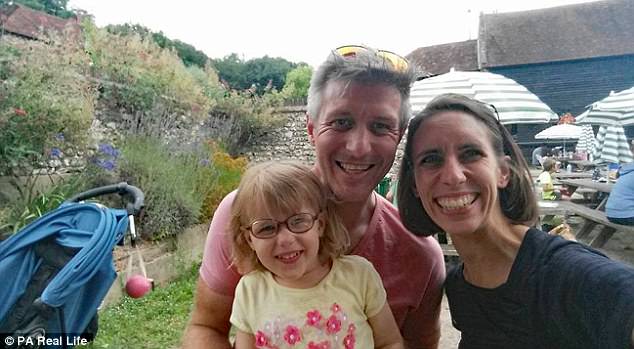 Symptoms include a feeling of heaviness in the tummy, feeling or seeing a lump or bulge, problems with weeing and discomfort during sex.

Treatment for prolapses varies depending on how severe it is, but can range from simple lifestyle choices such as losing weight or stopping smoking, to surgery.

As well as being caused by pregnancy, pelvic organ prolapse can also be caused by ageing, being overweight, having long-term constipation, having the womb removed or heavy lifting.

On top of this, Mrs Curtis also has diastasis – in which the two muscles running down the middle of her stomach separated – meaning she still looked pregnant months after giving birth.

Thankfully, both conditions improved after she began working with pelvic floor physiotherapist Emma Brockwell, having sessions once a month. 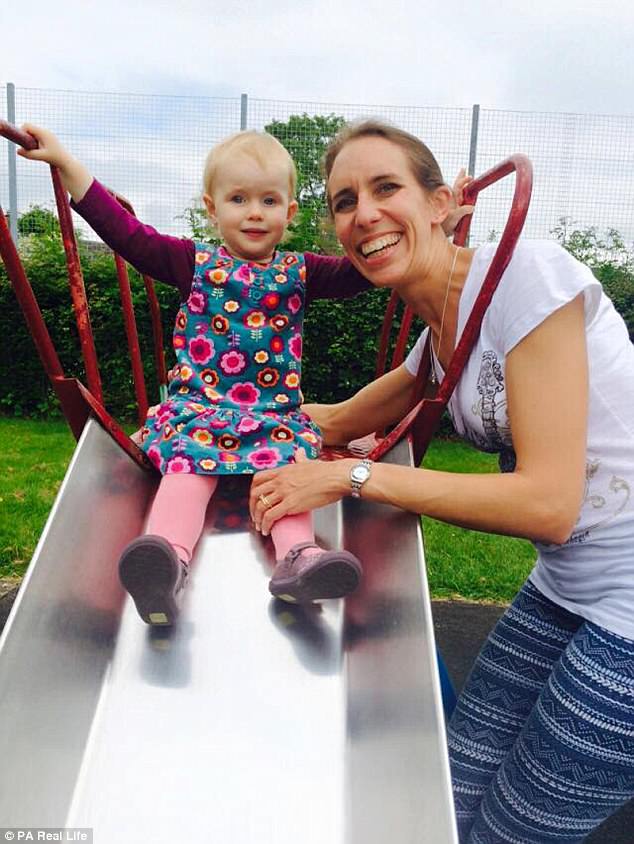 Mrs Curtis’s physiotherapy is ongoing and she says the prolapse is something she will have to deal with for her whole life, but she is now able to work and exercise again

‘The prolapse is something I’ll have to stay on top of my whole life, but the physio has helped enormously,’ said Mrs Curtis.

Her experiences have inspired her to start mother and baby fitness classes called Team Mama.

‘I really had to fight to get physio’

‘In lots of countries, women are given pelvic floor physio as standard after giving birth, but here, I felt I had to really fight for it,’ she said.

Though her prolapse has remained stable and urinary incontinence has improved, Anna’s diastasis sadly worsened when she gave birth to her second child, Mattie, on  August 7 2017. Mattie Curtis, the couple’s second child, who was born on August 7 2017

Admitting that she had been nervous about getting pregnant again, she continued: ‘Everything had come together quite well, thanks to the physio, then after Mattie it came back hugely.

‘I could literally see my intestines through the skin. The gap between the two muscles was bigger than my hand.

‘I still looked like I had a baby bump, too. All three of my conditions are related, though.’

Now, with the help of further physio – which she has once every six weeks – Mrs Curtis is improving all the time.

And, while she says there is no quick fix for what her body has been through, she can run again in short stints without leaking or feeling heaviness.

‘You only get one body, you’ve got to be kind to it’

Now, she is speaking out to help teach other women about post-natal health, and encourage them to give their bodies a chance to heal.

‘It’s been a long road, but I’m slowly coming out the other side,’ she said. ‘Every mum will have their own pregnancy journey, but it’s all about doing what’s best for you.

‘There’s a lot of pressure to get back out there, but many of these mother and baby fitness classes encourage exercises that are completely inappropriate.

‘With me, the symptoms were always there, but the classes I did certainly didn’t help.

‘You only get one body, and after something as major as giving birth, you’ve got to be kind to it.’

The Chartered Society of Physiotherapy is encouraging people to find new activities they enjoy as part of their Love Activity, Hate Exercise? campaign which launches in July. To find out more, visit www.csp.org.uk.