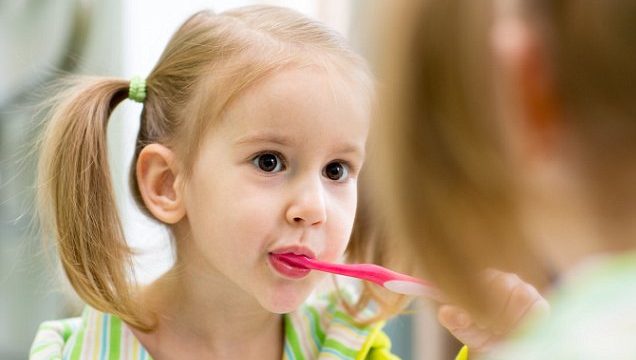 Some 23.3 per cent of five-year-olds have dental decay, of which most have an average of 3.4 teeth that are either missing or filled, according to Public Health England (PHE) data.

Around 17,000 youngsters have been forced to have decayed teeth removed, which often requires a hospital stay and children being put under general anaesthetic, the figures show.

The PHE report reveals ‘wide variation’ between rates of decay in different regions of the UK, with children from deprived backgrounds being more likely to experience dental damage.

British Dental Association chairman Mick Armstrong said: ‘It’s a tragedy that a child’s oral health is still determined by their postcode and their parents’ incomes.

‘We should not accept that a child raised in Pendle will enter primary school with 20 times the levels of decay as one born in the Surrey home of the Health Secretary.’

Previous research suggests one in seven toddlers have tooth decay due to parents not appreciating the importance of brushing their children’s teeth as they juggle the responsibilities of raising a family. 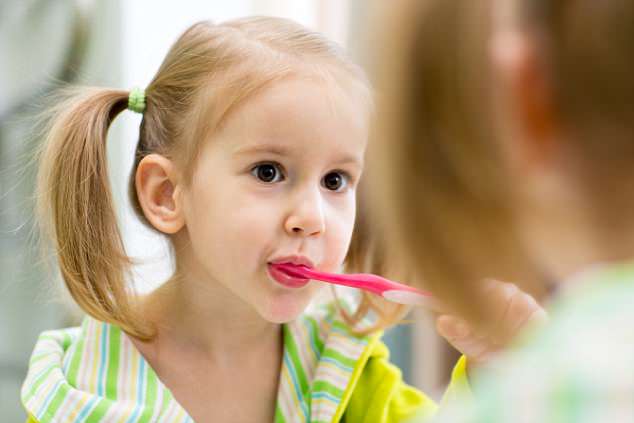 HOW MANY TODDLERS HAVE TOOTH DECAY?

One in seven toddlers has tooth decay, research suggested in August 2017.

Some 14 per cent of three-year-olds have a decayed, missing or filled tooth, a study found.

Experts worry parents do not appreciate the importance of brushing their children’s teeth as they juggle the responsibilities of raising a family.

Study author Maria Morgan, Experts worry parents do not appreciate the importance of brushing their children’s teeth as they juggle the responsibilities of raising a family., said: ‘People don’t realise that you should start that early.

‘We are having some children at five, six or seven who are having five, six, seven, eight, nine teeth removed in one go.’

The researchers analysed 1,400 parents. Of which, 75 per cent brushed their children’s teeth the recommended twice a day.

Yet, due to the 25 per cent who fail to ensure their youngsters’ dental hygiene, 14 per cent of three-year-olds have a decayed, missing or filled tooth.

Ms Morgan said: ‘People don’t realise that you should start that early.

‘No book can prepare you for life when you have a baby.

‘When that lands on your plate – with all the different things you have to do and fit in – brushing teeth might not be the highest priority in the day.

‘Sometimes it can get left. The messages might not be getting to everybody.

She added: ‘We are having some children at five, six or seven who are having five, six, seven, eight, nine teeth removed in one go.

‘There are some children who are having teeth extracted under general anaesthetic; that’s approximately 8,000 children a year.

‘It shouldn’t be that great a number.’

Commenting on the figures, Izzi Seccombe, chairwoman of the Local Government Association’s Community Wellbeing Board, said: ‘Tooth decay is largely preventable, yet is the most common oral disease affecting children and young people.

‘The findings of this survey highlight the need for urgent investment in oral health education so that parents and children understand the impact of sugar on teeth and the importance of good oral hygiene.

‘Untreated dental care remains one of the most prevalent diseases affecting children and young people’s ability to speak, eat, play and socialise.

‘This study underlines how regular check-ups at a dentist can help prevent tooth decay and the need for hospital treatment.’

Where are child tooth-decay rates highest?

Rates are highest in London, where 7.2 per cent of youngsters living in Tower Hamlets have had teeth extracted compared to the national average of 2.4 per cent.

In Yorkshire and the Humber 4.1 per cent of five-year-olds have had teeth removed due to decay, compared to 1.3 per cent in the East of England.

The researchers wrote: ‘Analysis shows that, while dental decay levels are reducing, and there are signs that inequalities are beginning to reduce, the inequalities gap remains unacceptably high.’

‘The NHS will keep spending millions extracting baby teeth in overstretched hospitals until policymakers step up and grasp the nettle.

‘When programmes and policies designed in Britain have become the envy of the world, it’s perverse that children in England are not benefiting from them.’

‘Children in our most deprived communities continue to be hit the hardest – we need more local authorities using targeted interventions to reduce these inequalities.’

Overall, the report shows improvements in the proportion of youngsters suffering dental decay in the last decade.