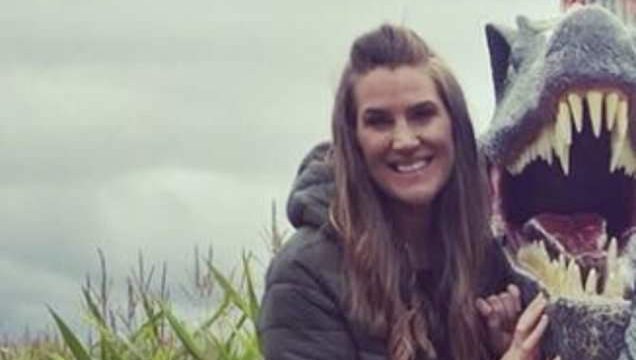 Mother, 33, wrongly told she was pregnant by a faulty test recalled by health officials claims it ruined her ‘once-in-a-lifetime’ £7,000 holiday to Florida

Claire Bushby, 33, and her partner were excited for their dream trip to Florida in July

A mother today claimed her dream holiday to Florida was ruined after she was wrongly told she was pregnant by a faulty test.

But her holiday plans were heavily affected after being told she was pregnant by a Clear & Simple digital test just two days before flying to the US.

Health officials yesterday revealed 58,000 of the tests – sold in Home Bargains and other high street shops – were being recalled by the manufacturer.

Ms Bushby, who had been excited for her holiday for months, told MailOnline she was forced to avoid all alcohol because of the false reading.

The administrator, from Durham, also revealed she was unable to go on any rides with her six-year-old son.

Ms Bushby told MailOnline it was ‘just a really s*** time’ – but added she and her family still had a good time overall. She said: ‘It was a once in a lifetime holiday that cost us thousands of pounds.

‘But there were so many rides I couldn’t go on, I couldn’t enjoy the water parks and I couldn’t have anything to drink.’

She added: ‘We weren’t in a position to be thinking of having children but the thought of having a termination was horrific.

‘I wouldn’t have been able to have a termination because I would have pictured him. Absolutely we would have kept [the baby].’

Ms Bushby, whose partner didn’t want to be named, had been on contraception for six years following the birth of son. Her last injection was June 19.

She took the cheap Clear & Simple digital test she bought from Home Bargains to rule out being pregnant after putting on some weight.

Recalling the moment the test showed positive, she told MailOnline: ‘My heart just stopped. I had no reason to doubt it, how could it be wrong?’

As soon as she landed back in England, she bought another brand of pregnancy test from a supermarket, which came back as negative. 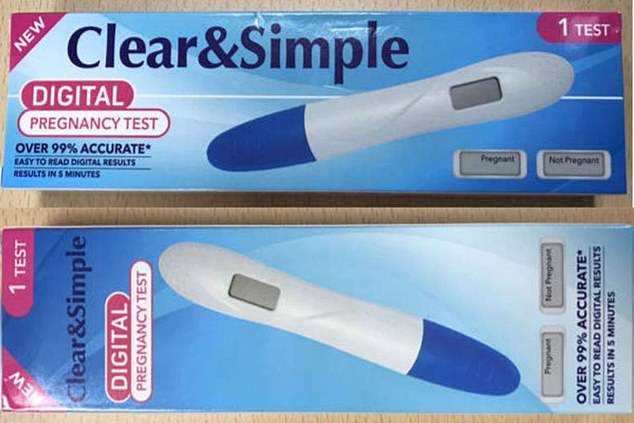 HOW DO I KNOW IF MY PREGNANCY TEST IS AFFECTED?

The manufacturer estimates more than 58,000 affected tests have been distributed in the UK.

Why are the tests giving false positive readings?

In alert dated September 1 and sent to Healthpoint, the distributor of the tests in the UK, the firm revealed how the test was producing false positive results.

Guangzhou Wondfo Biotech told the distributor an investigation showed the rib height of some test strip brackets were wrong.

It said this meant there was a large gap between the test strip bracket and the plastic enclosure of the digital pregnancy test.

In the alert, the firm added: ‘Therefore, it made a change in the light path of some products which eventually led to a larger signal value resulting in false positive results.’

Desperate to confirm she wasn’t pregnant, Ms Bushby had her bloods taken. Doctors confirmed she was not expecting.

She admitted she wasn’t planning on having any other children after having a ‘bad experience’ during childbirth.

Ms Bushby today said she was ‘really relieved’ to hear the news of the faulty tests, after being left confused for the past three months over her ordeal.

The Medicines and Healthcare products Regulatory Agency (MHRA) announced a batch of the tests had been affected by a manufacturing error.

It issued the alert yesterday. But the body, which polices the safety of medical products, admitted it received notice of the recall a month ago.

Guangzhou Wondfo Biotech announced it was are recalling one lot of faulty Clear & Simple digital pregnancy tests, which usually retail for between £3 and £4.

The manufacturer, based in Guangzhou in China, issued an alert to Healthpoint, the distributor of the tests in the UK on September 1.

Guangzhou Wondfo Biotech told the distributor an investigation showed the rib height of some test strip brackets were wrong.

It said this meant there was a large gap between the test strip bracket and the plastic enclosure of the digital pregnancy test.

The firm added: ‘Therefore, it made a change in the light path of some products which eventually led to a larger signal value resulting in false positive results.’ 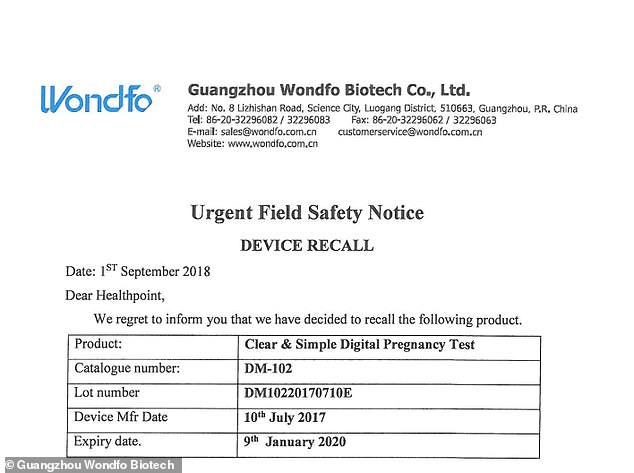 Officials issued the alert about the manufacturing error this morning. However, the body today admitted it received notice of the recall a month ago (pictured: a letter from the manufacturer to Healthpoint, the distributor of the tests in the UK)

RESTAURANT WORKER, 22, WAS LEFT DEVASTATED WHEN HER ‘POSITIVE’ CLEAR & SIMPLE PREGNANCY TEST TURNED OUT TO BE FALSE

A restaurant worker was left devastated when her ‘positive’ Clear & Simple pregnancy test allegedly turned out to be false.

The woman, who chose to remain anonymous, bought the test for around £2.99 from Home Bargains in July after she came off the pill and missed a period.

After being told she could not get a GP appointment for the next two weeks and suffering from severe abdominal pain, she called the non-emergency number NHS 111.

Concerned she became pregnant so quickly after coming off the pill, NHS workers told the 22-year-old she may be suffering from an ectopic pregnancy and urged her to go to hospital immediately.

Although the woman, from Rossendale, Lancashire, and her 26-year-old boyfriend had not been trying for a baby, they had discussed starting a family in the past and were excited by the ‘positive’ result.

‘My boyfriend was really happy, he’s ready for children,’ she told MailOnline. ‘We both work full time, we have a mortgage, we’re in the right situation for it.’

Once at hospital, she spent more than eight hours doing urine and blood tests before being told she was not pregnant.

‘The whole thing was so nerve-racking,’ she said. ‘Ectopic pregnancies are so dangerous and often need surgery to be removed so it was scary.’

Ectopic pregnancies occur when a fertilised egg implants itself outside of the womb, usually in one of the fallopian tubes.

She added: ‘The box said it was 99.9 per cent accurate so I expected the result to be true. I feel really let down and I’ll never ever use that brand again.’

A spokesperson for the MHRA told MailOnline it received notice of the recall from Healthpoint on September 7.

The Government agency argued it was always going to take time to make the alert because it had to conduct its own internal investigations.

Healthpoint said the Clear & Simple digital pregnancy tests can be purchased at Bodycare and Poundworld, before the latter went bust.

The test is marketed as being 99.9 per cent accurate and giving results in just five minutes.

Home pregnancy tests detect a hormone called beta human chorionic gonadotropin (HCG) found in the blood and the urine which is produced by the developing placenta.

The Clear & Simple Digital Pregnancy Tests that have been affected have the lot number DM10220170710E and expire in January 2020.

The MHRA has issued alerts over a string of faulty products in the past few months, including 10 batches of Durex condoms that could burst during sex.

WOMAN, 30, CRAVING A CHILD WITH HER PARTNER TELLS OF THE ‘AWFUL’ MOMENT SHE FOUND OUT SHE WASN’T PREGNANT

A 30-year-old woman craving a child with her partner said her world came crashing down after getting several false positive readings from Clear & Simple digital pregnancy tests.

The sales manager, who wanted to remain anonymous, today told MailOnline she took one of the firm’s tests at the end of March after missing her period. It told her she was expecting.

The woman, who has been with her 30-year-old partner for two years, took several more of the tests, which she bought in Home Bargains because they were cheap. Only one gave her a negative result.

Believing she was expecting her first child, the woman, from Leeds, tried to book in with a doctor – but struggled and eventually went private to have a scan at the nine-week mark.

Their tests showed her womb was ‘empty’ – despite them believing she was pregnant because of the numerous tests that came back positive. Eventually she was told there was no pregnancy.

The woman told MailOnline: ‘We had been trying for 18 months.

‘I had got to a comfortable age in my life… it seemed like right time to expand the family and have a child of my mine.’

Commenting on when she found out she wasn’t actually pregnant, she said: ‘It was awful, it was like having a miscarriage.’