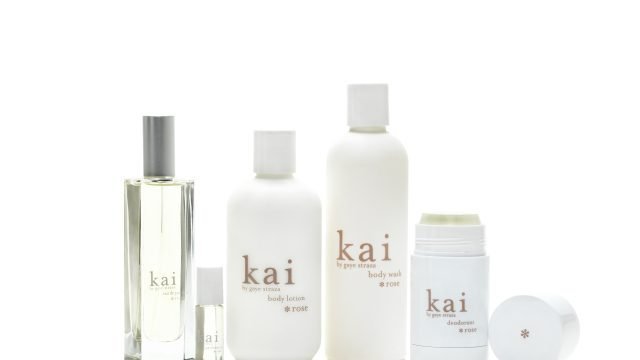 The Malibu fragrance-based beauty brand Kai, which this year celebrates its 20th anniversary, is the definition of a sleeper brand. The gardenia-plumeria blend perfume oil, inspired by founder and chief executive officer Gaye Straza’s trips to Hawaii and the scent of the leis that greet visitors when they step out of the plane, became an instant hit when Straza began selling it in unmarked bottles beside the cash register of a then-retail store in the Malibu Country Mart.

Kai Rose’s new deodorant.It was actually surplus from a personal batch that Straza had a local perfumer create for her because she was too sensitive to other scents. “I had to order a whole pound of it, so when I sold my retail business, I just started giving it friends,” she said. Four months later she decided to sell it to other stores, packaging it with a lucky bamboo plant display. Her first wholesale account was Angel in Montecito, followed by Fred Segal.Since then, the original Kai by Gaye Straza scent has expanded into an entire range of body-care, hair-care and home fragrance products. Last year, Straza introduced her second scent, Kai Rose, a range that now includes a perfume oil roller, eau de parfum spray, body lotion and body wash. The deodorant stick debuts April 16 on kaifragrance.com, and in national wholesale partners including Anthropologie, Barneys New York, nordstrom.com and Dermstore.com on May 1.

Kai founder Gaye Straza with her husband Peter Pichler.Straza’s plan is to eventually produce Kai Rose across all categories. A candle will debut around Holiday, followed by a room diffuser. The rose scent actually has the original’s base note, so both lines can be layered together. “That is what Bulgari did, it’s how they keep their core customer,” Straza noted.Her core customers also include men like Tommy Lee and Chad McQueen who like the spray-on body oil and body butter. Behati Prinsloo is a fan of the deodorant, which Straza also created for her own sensitive skin.Straza’s grand plan includes adding more scents, most likely a citrus-based one next. “I commute weekly between Palm Spring and Malibu and the desert plants that bloom at night inspired me,” she said. “Stores always want more newness.”