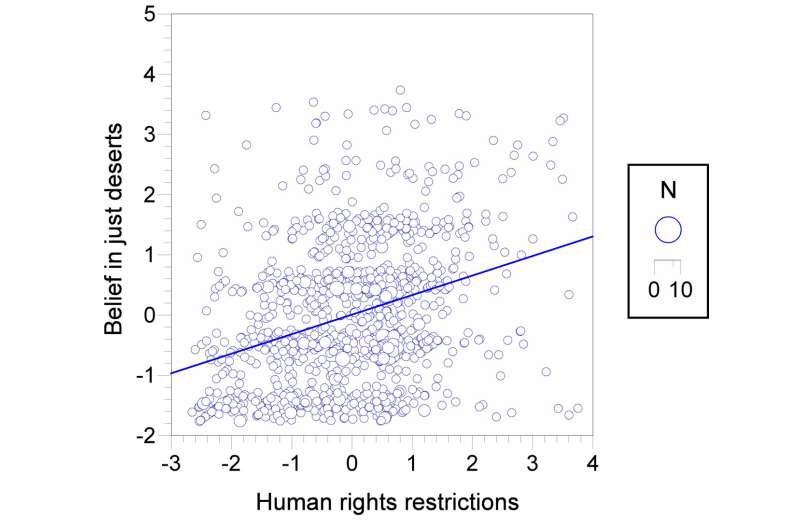 Perceptions of the causes of illness vary widely across the global population. But now, researchers from Japan have found new information about the perception that individuals with COVID-19 deserved to get infected.

In a study recently published in PeerJ, researchers from Osaka University have revealed that opinions about government restrictions regarding public safety were significantly associated with attitudes about COVID-19 patients.

“Belief in Just worlds” is the idea that we live in a just world where individuals receive the rewards or punishments they deserve. When applied to the idea of illness, “belief in just deserts” reflects an individual’s feeling that a person who is ill deserved it because of previous decisions they had made. In the context of the COVID-19 global pandemic, attitudes about illness can have important consequences for patients, as well as for the public health system.

However, little is known about characteristics influencing the belief in just deserts regarding COVID-19 infection among Japanese individuals, which the researchers at Osaka University aimed to address.

“A previous study indicated that individuals in Japan were more likely than those in other countries to believe that COVID-19 patients deserved to be infected,” says Asako Miura, senior author. “Because this psychological characteristic could promote prejudice against COVID-19 patients, we wanted to investigate the characteristics associated with this belief.”

To do this, the researchers conducted an online questionnaire survey of 1,207 respondents in Japan aged 20–69 years. They examined the relationship between the belief in just deserts and demographic variables, as well as infection-related and socio-psychological characteristics.

“The results were surprising,” explains lead author of the study Michio Murakami. “We found that individuals who strongly agreed with government restrictions on individual behavior during public emergencies were more likely to believe in just deserts.”

Men were also slightly more likely to believe in just deserts than women. Furthermore, participants who thought it was unlikely that the average Japanese individual would become infected with COVID-19 had low levels of belief in just deserts.

Given that perceptions regarding the deservingness of illness can lead to discrimination toward patients and can even expand to include prejudice against entire ethnic or occupational groups, this information may be used to address harmful attitudes affecting public health. Specifically, the foundational information reported in this study could lead to new approaches for addressing social discrimination, stigma, and prejudice against individuals with COVID-19 and other illnesses.