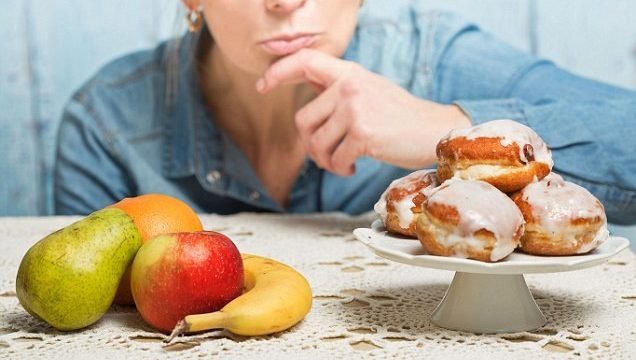 Why donuts are so addictive: Junk foods high in both fat AND carbs confuse the brain – triggering an urge to over-eat

Foods that combine fats and carbs, like donuts, trick us into thinking they have more nutrients than they do, leading to over-eating, new research has shown.

The brain has evolved to trigger more desire in us for foods that are more nutritious.

Highly processed foods often consist of carbs cooked in fat and coated in or flavored with sugar and are newer than that regulation mechanism in our heads, and confuse the reward system that tells us what we should be eating.

These foods actually have stronger effects on the brains reward system, leading us to over-eat and choose junk food over healthier snacks, according to new Yale University research.

The Yale University finding sheds light on how the processed food industry cashes in on the human craving for unhealthy diets. 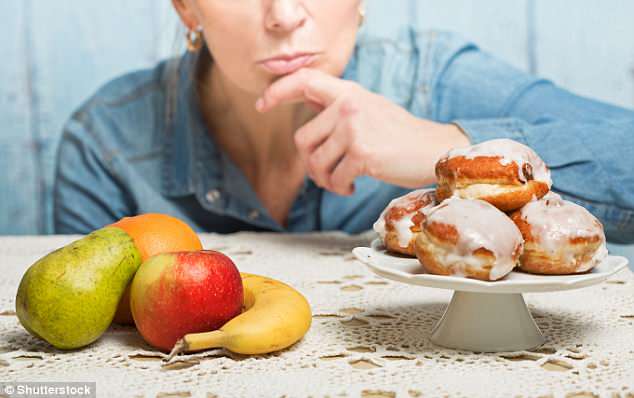 Highly-processed foods like donuts contain both fats and carbohydrates that trick the brain’s reward system and makes us over-eat, according to new research

If you have ever found yourself craving a banana instead of your usual bag of chips to accompany your sandwich at lunch, then you have felt your brain’s system for making sure you get the nutrients you need at work.

But modern highly-processed foods contain more combined fats and carbohydrates than our brain knows what to do with.

So the system that would normally tell us to choose a potassium-rich banana over potato chips instead gives the green light for heavy but nutrient-poor foods.

The new study of more than 200 adults with a normal BMI (body mass index) found they were willing to pay more for foods that combined fat and sugar.

What’s more, the fat-carb combo lit up neural circuits in the striatum in the prefrontal cortex of the brain more than a favorite, sweeter or more energy dense food – or a bigger portion size.

‘Our study shows that when both nutrients are combined, the brain seems to overestimate the energetic value of the food.’

The findings, published in the journal Cell Metabolism, support the idea these kinds of foods hijack our body’s inborn signals governing consumption.

Dr Small said: ‘The biological process that regulates the association of foods with their nutritional value evolved to carefully define the value of a food so organisms can make adaptive decisions.

‘For example, a mouse should not risk running into the open and exposing itself to a predator if a food provides little energy.’

The Western diet is loosely defined as one full of fatty and sugary foods, such as burgers, fries and soda.

People often eat foods that are high in

Health effects have been linked to things such as hypertension, heart disease, diabetes, obesity, colorectal cancer and dementia.

It could help explain brain-body mechanisms underlying the genetic predisposition for obesity, eating in the absence of hunger and difficulty losing or keeping off excess pounds.

The participants, all in their 20s, underwent brain scans while being shown photographs of familiar snacks containing mostly fat, sugar or a combination of them. They were given a limited amount of money to bid for them.

Dr Small said: ‘In nature, foods high in fat and carbohydrate are very rare and tend to have fiber, which slows metabolism. By contrast, it is very common for processed foods to have high fat and high carbohydrate loads.’

After the domestication of plants and animals and the development of grain and dairy production around 12,000 years ago, opportunities to consume fat and carbohydrates together increased.

But processed foods such as doughnuts, which could contain 11 grams of fat and 17 grams of carbohydrate, have only been around for 150 years, not long enough for us to evolve a new brain response to them.

Scientists believe our past experience with the nutritive properties of carbohydrates releases the feelgood chemical dopamine in the brain through an as-yet-unknown metabolic signal.

These kinds of signals seem to help regulate what and how much we eat. The researchers believe the simultaneous activation of fat and carbohydrate signaling pathways launches an effect the human body has not evolved to handle.

Consistent with this suggestion, mice given access to fat or sugar alone regulate their total daily caloric intake and body weight. But given unrestricted access, they quickly gain weight.

Dr Small said: ‘These results provide the first demonstration that foods high in fat and carbohydrate are, calorie for calorie, valued more than foods containing only fat or carbohydrate and that this effect is associated with greater recruitment of central reward circuits.’

She added that it ‘may be one mechanism by which a food environment rife with processed foods high in fat and carbohydrate leads to overeating.’