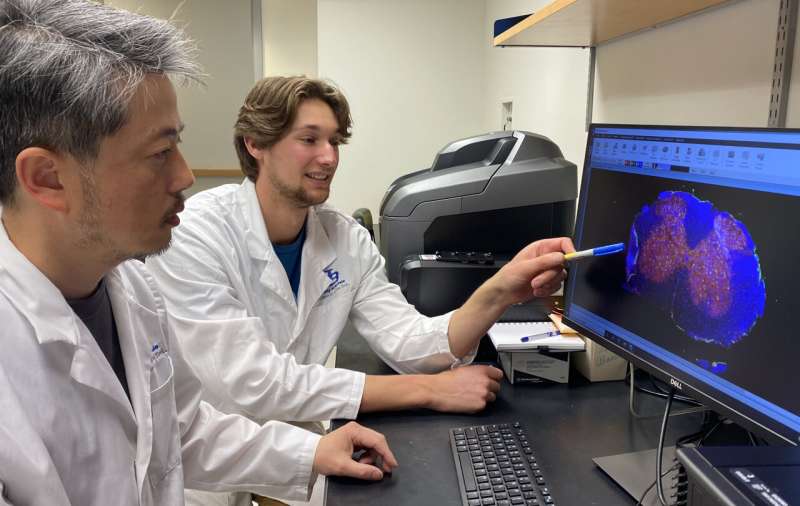 The gene defect underlying Krabbe disease causes degeneration of neurons directly, independent of its effects on other cell types, according to a new study publishing July 5 in the open-access journal PLOS Biology by Daesung Shin of the University at Buffalo, U.S. and colleagues. The discovery represents a new mechanism of action for the mutant gene, presenting a more accurate picture of the disease process that may help in the development of therapies.

Krabbe disease is a rare autosomal recessive neurodegenerative disorder caused by mutations in the galactosylceramidase (GALC) gene. GALC is an enzyme that is active in the lysosomes, and its absence leads to the buildup of the lipid psychosine. Accumulation of psychosine in the brain and elsewhere triggers destabilization of cell membranes, degeneration, and cell death. Loss of myelin insulation around the nerves is a major pathological feature of Krabbe disease, and oligodendrocytes, which make myelin, have naturally been thought of as the drivers of the disease process, with degeneration of neurons a secondary consequence of this loss of myelin.

Other, more recent evidence has suggested that neurons may be affected independently, but that hypothesis has been difficult to test, as GALC is expressed ubiquitously in the brain, and its disease-related loss occurs in all cell types. To overcome that barrier, the authors created a mouse model in which GALC expression was knocked out only in neurons, retaining activity of the normal gene elsewhere.

They found that psychosine accumulated in neurons, leading to abnormally shaped lysosomes, swollen axons, and increased neuronal death, along with neuroinflammation and deficits in motor ability and coordination in mice. While there was no loss of oligodendrocytes, lack of neuronal GALC expression did lead to a reduction in myelination, presumably through toxic effects on myelin sheaths from the accumulated psychosine.

“Our results indicate for the first time that neuronal expression of galactosylceramidase is essential to maintain and protect neuronal function, independent of its effects on myelin-producing oligodendrocytes,” Shin said. “These results suggest that lack of the enzyme in neurons may contribute directly to the pathogenesis in Krabbe disease, and that therapies for the disease may need to address the absence of neuronal expression of galactosylceramidase in order to be fully effective.”