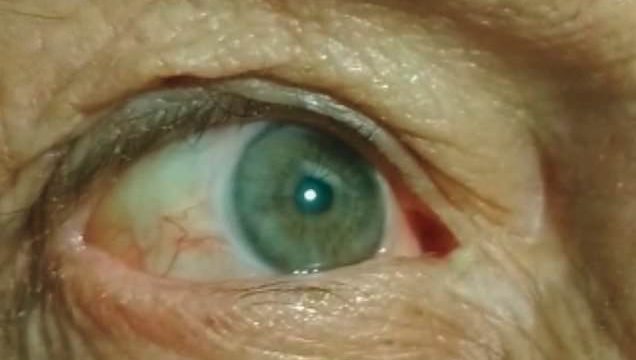 Doctors have captured footage of a 73-year-old man’s pupils dilating in sync with his heartbeat.

The unnamed pensioner was diagnosed with the rare Landolfi’s sign – a side effect of his severe heart condition.

His heart had a ‘leakage’, which causes blood to pump around his body inefficiently, leading to an abnormal flow to the vessels in his eyes.

This caused the muscles in his iris, the coloured part of the eye which controls the pupil, to contract in rhythm with his heartbeat.

Normally, the pupil changes size only in response to light, getting smaller in bright light and bigger when its darker. 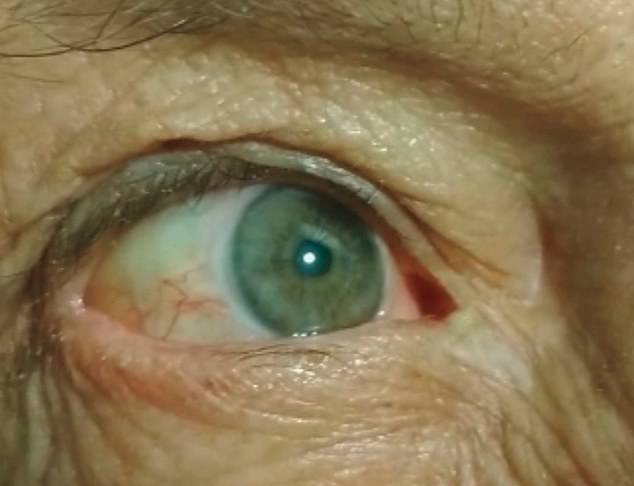 The 73-year-old, who has not been named, was diagnosed with the rare Landolfi’s sign

Doctors in Mexico shared the case study in the prestigious publication, The New England Journal of Medicine.

He reported being short of breath for at least one week, which had been getting progressively worse.

Upon physical examination, the man was found to have high blood pressure, heart rate and respiration rate readings.

Tests revealed his heart murmured when it contracted – called a systolic murmur – and when it was relaxed – a diastolic murmur.

Although sometimes murmurs are present in people who are healthy, it can indicate there is a problem with one of the heart’s valves.

An ophthalmologist examined his eyes, which revealed dilation and constriction of his pupils synchronized with his heartbeat.

Known medically as Landolfi’s sign, the rare synchronization can be seen in patients with severe aortic regurgitation.

WHAT IS AORTIC REGURGITATION?

Aortic valve regurgitation allows some of the blood that was just pumped out of the heart’s main pumping chamber (left ventricle) to leak back into it.

The leakage may prevent your heart from efficiently pumping blood to the rest of your body.

As a result, people may feel fatigued and short of breath.

Aortic valve regurgitation can develop suddenly or over decades.

The rare condition, for which hypertension is a known risk factor, occurs when the aortic valve which sits between the two heart chambers doesn’t close tightly.

This then allows blood to leak back into the heart’s pumping chamber in the wrong direction.

It prevents the heart from efficiently pumping blood to the rest of the body, causing shortness of breathe and fatigue.

In the most severe cases, it can cause Landolfi’s sign. The prevalence of the sign, first described by Michel Landolfi in 1909, is unknown.

Landolfi’s sign causes a change of blood flow to the iris, the coloured part of the eye which controls the pupil with tiny muscles.

An array of medicines, injuries and diseases can cause the pupils to dilate or contract without any change in light.

For example, brain injuries can cause dilated or ‘big’ pupils, while blood pressure pills, such as clonidine and tetrahydrozoline, or opioids, such as coedine and morphine, can cause the pupils to become ‘pin points’.

Without treatment, severe aortic valve diseases are likely to get worse and may eventually be fatal, the NHS say.

Around 7.4million people in the UK live with heart and circulatory disease.

In the US, more than five million Americans are diagnosed with heart valve disease each year.