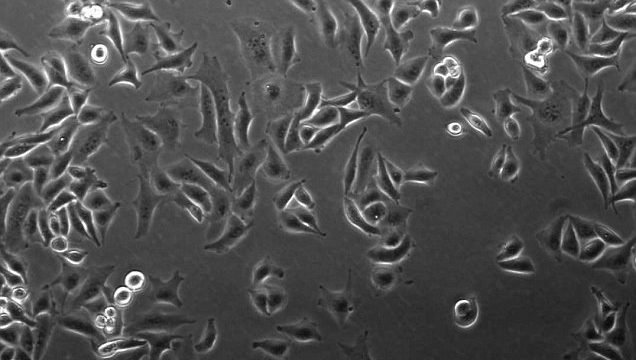 Thousands of pancreatic cancer patients have been given hope after scientists revealed they have found a way to stop the disease from spreading.

Imperial College London scientists have pinpointed molecules they call the ‘rabble rouser’ of the cancer, which kills 93 per cent of patients within five years.

Removing these aggressive molecules – called microRNAs – from DNA with gene editing could slow the growth of tumours and make chemotherapy more effective.

Figures suggest around 10,000 people are diagnosed with the disease in the UK each year – and survival rates have barely improved since the 1980s.

Pancreatic cancer cells are difficult to stop because they have a hard shell called a stroma, but it is hoped the new breakthrough will be able to stop that from forming.

Weakening cancer cells and slowing their spread could allow chemotherapy to destroy more of the tumours – 80 per cent are diagnosed in their late stages. Cancer cells without the microRNAs researchers identified (left) were considered calmer and less invasive, while those which had not been edited were ‘spiky, angry’ and more aggressive (right), which led to tumours growing and spreading faster

Human patient samples also showed that survival rates are worse among people who have more of the molecules in their tumours.

‘Paving the way for future treatment’

Leanne Reynolds, head of research at Pancreatic Cancer UK which funded the study said: ‘We are incredibly proud to have funded this cutting edge research.

‘It has not only found a crucial new way of slowing down the growth and spread of this tough cancer, but is also paving the way for more effective chemotherapy treatment for patients in the future.’

Imperial College researchers published their findings in the Nature Communications journal this week.

They used a gene-editing process called CRISPR – which involves removing sections of DNA – to remove the aggressive microRNAs from cancerous mouse cells.

The cancer cells without the microRNAs do not grow or spread as quickly either in lab conditions or when injected into mice. Pancreatic cancer has the worst survival rate among common cancers, and chemotherapy is particularly difficult because the cells build a tough armour called a stroma – but researchers think they may be able to stop this happening

They also looked at tumour samples from around 100 patients with pancreatic cancer and scanned for levels of the two microRNAs.

Aggressive tumours – which are more likely to prove fatal and spread around the body, contain higher levels of the microRNAs.

Survival rates are also worse among patients with high levels of the molecules.

Many people are diagnosed too late

Lead researcher Dr Leandro Castellano said: ‘Sadly by the time people are diagnosed with pancreatic cancer, all too often the disease has spread to other organs.

WHAT IS PANCREATIC CANCER?

Pancreatic cancer is caused by the abnormal and uncontrolled growth of cells in the pancreas – a large gland in the digestive system.

Around half of all new cases occur in people aged 75 or older, with one in 10 being genetic.

Other causes include age, smoking and other health conditions, including diabetes.

It is difficult to treat as it rarely causes any symptoms in the early stages, so it’s often not detected until the cancer is fairly advanced.

Around 10,000 people are diagnosed with pancreatic cancer each year in the UK, but that figure is five times as high in the US.

‘And treatment for pancreatic cancer is often not very effective, because the stroma makes it so difficult for treatment to reach the tumour and fight the disease.

‘It is therefore vital that new ways are discovered to slow down the growth and spread of this disease, and also to improve the effectiveness of treatment.

‘Our research was a great success in that we made progress towards tackling both these problems.’

He added that if the research continues to be successful they could move on to a clinical trial ‘in the next few years’.

Pancreatic cancer mainly affects people aged between 50 and 80, and around half of cases are diagnosed in people over 75. A third of cases are linked to smoking.

The pancreas is an organ near the stomach and spleen which produces enzymes for breaking down food – it also makes hormones including insulin.

Study author Dr Silvia Ottaviani said a new test for the disease could be based on their ability to identify the most dangerous molecules.

She said: ‘These molecules act like the ‘rabble-rousers’ in tumour cells – they drive a number of processes that cause cancer cells to become aggressive, and more likely to invade other areas of the body.

‘We see this when we look at the cells under a microscope – they become elongated and further apart from each other.

‘They are spiky, angry, and they want to go everywhere in the body and cause trouble.

‘We are looking at whether these molecules could one day form a type of test allowing doctors to gauge how aggressive a patient’s cancer is, which would help them decide the best treatment options.’