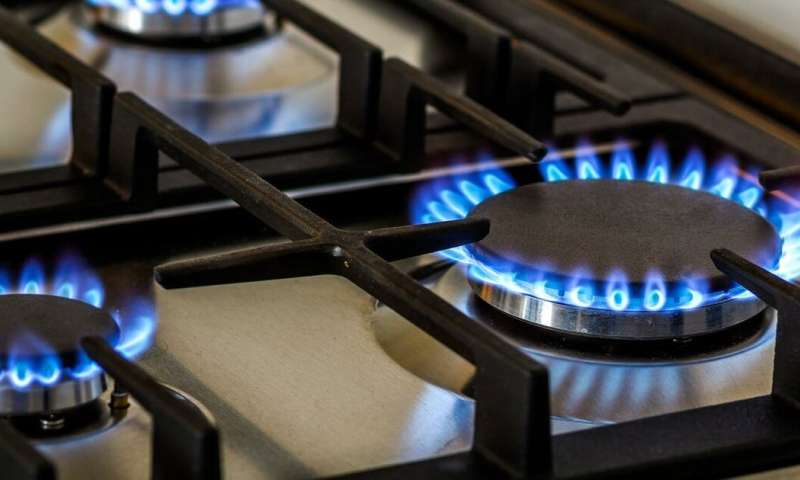 Increasing evidence suggests cooking with gas may make asthma worse in children. However, proper use of range hoods could reduce that risk.

Gas is excellent for cooking—it switches on in an instant and is easily adjustable.

But burning gas produces a variety of byproducts, some relatively benign and some not so benign for human health. And that’s without even considering the wider health effects of climate change, to which burning fossil fuels such as gas is the major contributor.

The natural gas supplied to domestic appliances such as stoves is almost all methane, with traces of other hydrocarbons such as ethane and some nitrogen and carbon dioxide (CO₂).

Natural gas burns very efficiently, as you can see from the blue, non-smoky flames on your cooktop. The process releases CO₂ and water, with traces of other gases.

For every kilogram (1,000 grams) of CO₂ produced from burning natural gas, 34g of carbon monoxide, 79g of nitrogen oxides and 6g of sulfur dioxide are also released. Several studies have found formaldehyde is released too, but I couldn’t find any studies that stated how much.

Gas is much cleaner to burn than coal. Coal burning typically produces 125 times as much sulfur dioxide as gas, and around 700 times the PM2.5 levels.

There’s a link with asthma in kids

But while a gas stove is much less polluting than a coal fire, some of the emissions can nevertheless accumulate in the home, and potentially have significant health effects.

Nitrogen dioxide and PM2.5 particles in particular are associated with poor health. PM2.5 particles are released by bushfires, diesel exhaust and wood-burning heaters, among others. They get deep into the lungs, and the toxins carried on the particles get absorbed into the blood stream.

It’s not clear whether gas stoves are a significant likely cause of health problems, because households have many other potential sources of indoor pollution too. Many homes use gas heaters, which generate similar emissions to stoves, and there are multiple sources of formaldehyde other than natural gas combustion (such as furniture, adhesives and carpets).

Untangling the health effects of gas stoves is therefore very complex. Because nitrogen dioxide and PM2.5 particles have a marked effect on breathing, a substantial amount of research has been directed to asthma.

The effects on gas stoves of adult asthma isn’t clear. A large study using the US Third National Health and Nutrition Examination Survey found no association between gas stove use and respiratory problems. A review of 45 epidemiological studies showed no consistent effect of gas stove use on respiratory health in adults.

A US study showed gas cookers increase the amount of nitrogen dioxide inside the home and increased the use of night-time inhalers by children with asthma. But paradoxically there was no increase in asthma symptoms.

Another Australian study, from 2018, gives an estimate of how strong the risk is (as opposed to the association).

The authors estimated 12.3% of the asthma in children who were exposed to gas stoves was due to the stove exposure itself.

Can we reduce the risk?

Almost certainly. Good ventilation will reduce levels of nitrogen dioxide and PM2.5 particles in your home.

Most modern houses are better insulated than the drafty homes of my youth, but better insulation means more accumulation of household pollutants. Fortunately, many modern homes also have modern stoves with a range hood. If properly installed, this will exhaust the nitrogen dioxide and PM2.5 particles. But the key issue is having them installed properly and using them—a hood that isn’t turned on won’t remove these pollutants.

The 2018 study on the prevalence of gas cooking in Australia found using a high-efficiency range hood could reduce the risk of childhood asthma due to gas stoves from 12.8% to 3.4%.

However, it also found 44% of people in Melbourne with range hoods said they didn’t use them regularly.

Even if you don’t have access to a range hood, improving natural airflow in houses will not only reduce the products of gas burning that are associated with asthma, but will also reduce other household pollutants with overall health benefits.

While there’s no need to rip out your gas stove, you can certainly take simple actions to reduce the risk, particularly if you have children or if anyone in your home is asthmatic.