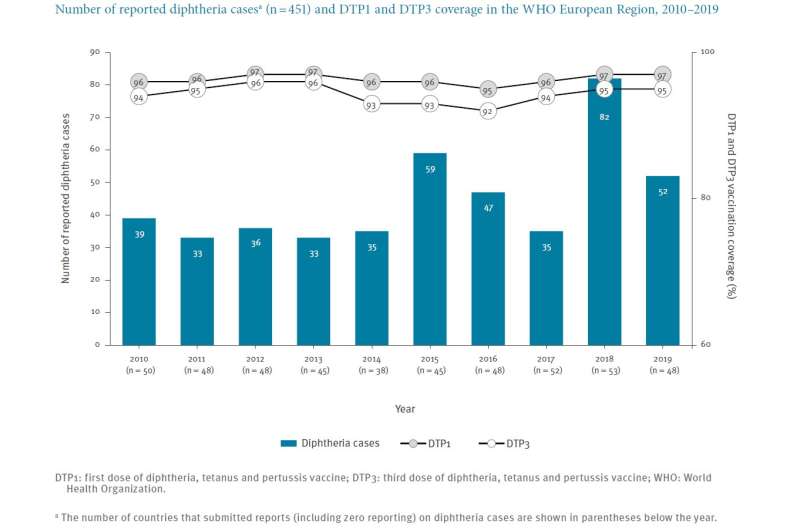 In their article published in Eurosurveillance today, Muscat et al. present diphtheria data on the number of notified cases between 2010 and 2019 from the WHO/United Nations International Children’s Emergency Fund (UNICEF) Joint Reporting Forms and analyze it by age and vaccination status.

Diphtheria re-emerged in the WHO European Region in the 1990s in the newly independent states of the former Soviet Union. Today, diphtheria is considered uncommon following successful mass immunization with only sporadic reports of cases in the WHO European Region, however, some of them fatal. Immunization with the available diphtheria vaccines is the only effective method of preventing this acute bacterial disease which was previously a major cause of death among children.

Worldwide, over 87,500 diphtheria cases have been reported between 2010 and 2019. During the same 10-year period, the WHO European Region recorded only 451 diphtheria cases. In 2019, 52 cases were notified by 11 of 48 countries that submitted data. Although relatively few, the cases observed in the European Region are of concern, and may be also partly attributed to suboptimal surveillance systems and inadequate or lack of specialized laboratory diagnostic capacity.

Adults aged 30 and older most affected

For the year 2019, where more detailed data were available, the age of reported cases ranged from less than a year old to older than 30 years of age. Most diphtheria were reported in adults aged 30 years and older. This age distribution shift with cases mainly among adolescents and adults concurs with recent review findings of diphtheria epidemiology.

The authors conclude that laboratory testing of all suspected cases should be conducted for case confirmation. An adequate surveillance of diphtheria requires that laboratories are equipped with the appropriate materials and that all isolates of potentially toxigenic corynebacteria should ideally be submitted to a reference/specialist laboratory for confirmation of identification and toxigenicity testing. A revised World Health Organization manual for laboratory diagnosis of diphtheria and related infections has recently been published to assist laboratory workers in the correct procedures to diagnose diphtheria cases and to guide clinicians in treatment options.