Britain has celebrated its drinking culture for centuries but initiatives such as the “Dry January” campaign show body-conscious adults are now shunning alcohol in record numbers—a phenomenon seized upon by the drinks industry.

“I actually realised I slept better, I felt great, I had a lot more energy,” 47-year-old Stuart Elkington said after he made the decision seven years ago to give up alcohol while trying to start a family with his partner.

A 2017 poll showed that 57 percent of 7,100 respondents said they had drunk alcohol in the previous week—the lowest level since the annual survey, conducted by the Office for National Statistics, was launched in 2005, when the figure stood at 64 percent.

That has translated into a rise in the number of Britons who say they do not touch a drop of alcohol—just over a fifth of those questioned last year, compared to 18.8 percent 12 years earlier.

The trend is particularly noticeable among those aged 25 to 44, where the figure climbed five points to 20.6 percent.

For all the benefits he felt after just six months of alcohol abstinence though, Elkington said he had one frustration.

“The one thing I did miss was actually having a beer. When I went and tried to find a really tasty beer I couldn’t really find one,” he told AFP.

Taking matters into his own hands, in 2016 he launched Dry Drinker, an online company selling beer, wine, sparkling wine and other alcohol-free or low-alcohol drinks.

The range rapidly expanded and today comprises more than 100 products.

“When you’ve got kids and a family or a busy life you don’t really want to waste your time with hangovers,” he said.

“For me it was about having the best of both worlds: I could enjoy some fantastic beer but without the negative aspects.”

Elkington said that sales had skyrocketed on the back of demand for products offering “the taste of alcohol but without alcohol”.

The trend seems to have been amplified by the popularity of “Dry January”, which became a formal campaign in 2013, when people give up alcohol for a month after the excesses of the holiday season. 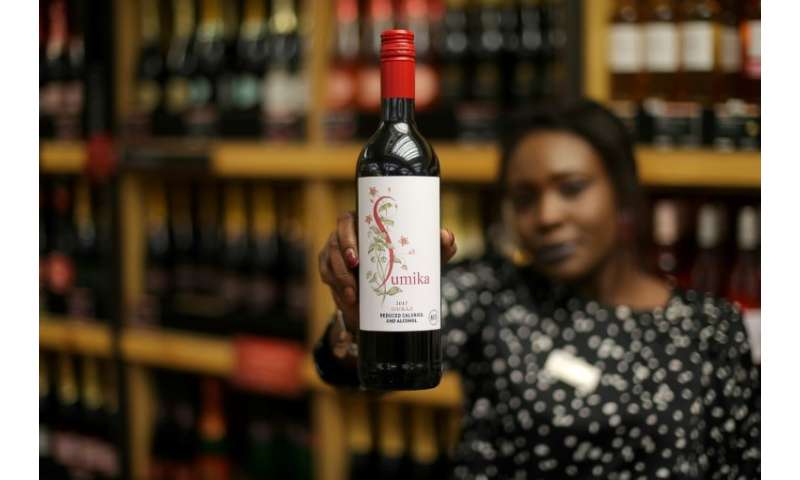 Sales of beer and cider containing less than 1.2 percent alcohol jumped by nearly 28 percent in 2017 compared to 2015, with demand for alcohol-free wine rising eight percent, according to consumer researcher Kantar Worldpanel.

The main driver of demand is “growing health-consciousness amongst consumers and greater awareness of the risks associated with heavy alcohol consumption,” BMI Research analysts reported.

Similar trends have been seen across developed nations.

Both the alcohol and mass retail industries have rushed into the blossoming sector.

“What you inevitably have in a shrinking market is people fighting harder for their market share,” said John Timothy, who heads Portman Group, the British alcohol lobbyist.

Producers are spending millions of pounds on bringing “much better quality” low-alcohol products to market.

Several alcohol-free beers have recently been launched on the British market, including one by the world’s largest brewer, AB InBev.

The Belgian-Brazilian company estimates that alcohol-free or low-alcohol beers will account for one fifth of its beer sales by volume by 2025.

British supermarket giant Tesco recently launched a range of wines with less than 0.5 percent alcohol, which, it boasts, is “virtually indistinguishable” from a full-alcohol product thanks to a technique “that gently removes the alcohol without sacrificing the aroma, quality and flavour profile of the wine”.

Rival Marks and Spencer is also on board.

“We had this idea with our supplier in South Africa called ‘Journey’s end’ to develop a high quality wine that would be lower in alcohol and lower in calories because we saw that consumers were increasingly aware in the UK of calories generally,” its sommelier Sue Daniels said.

“Certainly for us we don’t now see it as a niche market, we see it as a market we want to expand,” she added.