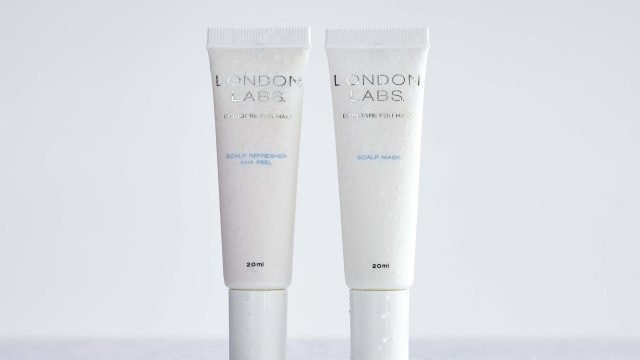 LONDON — London’s famously hard water, brimming with calcium and magnesium, might taste better than the softer samples from other parts of England, but it can wreak havoc on hair, turning a normally swishy mane into a scratchy, tangled nest after one wash.London’s tricky water was one of the inspirations behind a new brand of hair care called London Labs, which aims to treat the hair and scalp like the face, with products including an AHA peel, exfoliant, mask, shampoo and conditioner, all of which are built around prickly pear oil.“We wanted to bridge the gap between skin care and hair care and to simplify — and normalize — the hair-care regime,” said Defaf Alamri, who launched London Labs last November with her husband Steven Schapera, cofounder of Becca Cosmetics with Rebecca Morrice Williams.Alamri, a makeup artist with a background in the pharmaceutical industry, said there shouldn’t be a difference between a skin-care regime and a hair-care one. “I didn’t want any of the products to be seen as a ‘treatment,’ but rather as maintenance. And you can do it at home,” she said.London Labs offers 15 products including scalp treatments and exfoliators aimed at removing build-up and sebum and restoring moisture to the scalp and hair. The low-foaming, gentle cleansing shampoo, which contains no sulphates or silicones, and conditioner are formulated to protect hair from chemical damage and fading from the sun.There’s also a mousse, a dry shampoo, a hairspray and a moisturizer that looks just like a face cream in a little pot. The latter is meant to be applied directly to the hair to tame flyaways. The prickly pear oil, which hails from South Africa, is supposed to hydrate the scalp, act as a leave-in conditioner and promote hair growth.

The London Labs Pure Prickly Pear OilAlamri said she wanted to work with the prickly pear oil in particular because of its potency compared with other oils such as argan. “It’s great for the skin, easily absorbed and you don’t need as much of it as you would for other oils,” she said.She said the prickly pear fruit is grown exclusively for  London Labs in the grasslands of South Africa. The oil, which is dry, contains high levels of linoleic acid, which resembles the fatty acids  in human skin, and it can be used anywhere on the body.Alamri said she has also paid close attention to the pH balance of her formulations in order to mitigate the drying effects of the water in London and other regions such as Dubai and Hong Kong. The products are also meant to restore the scalp to its to its optimum pH, by maintaining and/or facilitating the natural scalp biome.Prices range from 20 pounds for the mousse to 70 pounds for the oil. The shampoo costs 27 pounds, putting it in a price league with Kerastase and Shu Uemura. Alamri said she wanted the products to be affordable luxuries with the highest quality of ingredients.The products are mainly stocked at Liberty in London and on the brand’s web site. It is also sold at Bloomingdale’s in Dubai and about 15 independent retailers across northern and Eastern Europe. London Labs’ chief operating officer Philippe Hostalery, the former global president at Tigi, and is based in the company’s Berlin office.Alamri said she’s looking to build revenue to two million pounds by 2019 as she prepares to roll out the products in the U.S. and later in “skin-care-focused” countries including South Korea and Japan.

The Colour Care shampoo by London LabsThe London Labs products dovetail with many of the trends emerging right now in the hair-care business, in particular the “skinification” of hair and consumers’ embrace of wellness.“The skinification of hair is not a new trend, but it has been intensifying the last couple of years,” said Sam Cheow, L’Oréal USA’s chief product accelerator, in an interview last year. “We’re seeing now the bigger engine that is driving it — it’s powered by lifestyle and the way we look at hair and skin and what we eat.”London Labs also plays to the at-home treatment trend. Earlier this year, the London-based celebrity colorist Josh Wood launched a digital-first label aimed at empowering women who color their hair at home. The service comes with online consultations, AI-enabled features and an array of temporary and permanent colors.Alamri said there are more products in the pipeline that speak to her obsession with how the scalp and hair behave, ones that give everyone a chance at cultivating a great mane. She’s been working on creating devices that “push” products into the scalp — those are set to launch next year. She’s also looking into how to stop pigment loss and hair loss.