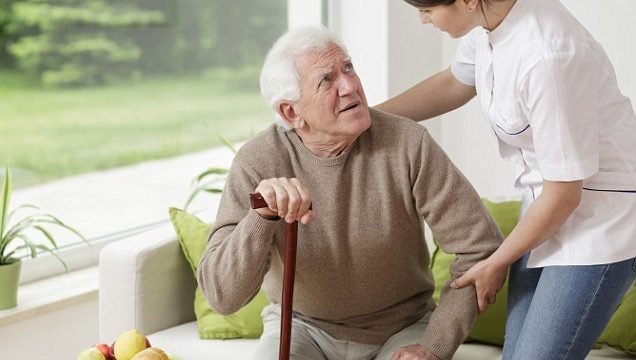 A cure for Parkinson’s disease could revolve around vitamin B3, a study suggests.

German researchers have found that taking a form of the vitamin can stop nerve cells from dying off.

Parkinson’s is a progressive neurological condition that destroys cells in the part of the brain that controls movement.

Around 140,000 people in the UK and nearly one million in the US suffer from Parkinson’s. But there is currently no cure.

The new University of Tübingen and Hertie Institute for Clinical Brain Research study could change that and offers a ‘new starting point’ for treatment. The Vitamin B3 could help to restore function in nerve cells with Parkinson’s, say study authors

Skin cell samples were taken from Parkinson’s disease patients and turned into nerve cells for the experiment.

The cells contained the GBA gene, a risk gene frequently found in people with the disease, which causes muscle stiffness, slowness of movement, tremors, sleep disturbance, chronic fatigue, an impaired quality of life and can lead to severe disability.

As expected, the mitochondria – described as the powerhouses of cells – in these nerve cells did not function properly.

They also produced less energy than normal cells, according to the study, published in the journal Cell Reports.

The researchers, led by Dr Michela Deleidi, ‘fed’ the cells nicotinamide riboside, a form of the vitamin B3. It is important in the formation of new mitochondria.

The researchers then decided to feed flies with the GBA gene nicotinamide riboside to observe the effects in a living organism.

Flies with the enriched feed were able to stave off the effects of Parkinson’s longer and showed less nerve cell die-off.

Commenting on the study, Dr Deleidi said: ‘Administering [B3] may be a new starting-point for treatment.’

Scientists still do not know exactly what causes the symptoms of Parkinson’s disease to start developing.

However, recent research suggests the parts of the brain that die off in Parkinson’s cases have damaged mitochondria.

The new study backs up the evidence and ‘suggests the loss of mitochondria does indeed play a significant role’, Dr Deleidi added.

WHAT IS PARKINSON’S? THE INCURABLE DISEASE THAT STRUCK BOXER MUHAMMAD ALI

Parkinson’s disease affects one in 500 people, and around 127,000 people in the UK live with the condition.

It causes muscle stiffness, slowness of movement, tremors, sleep disturbance, chronic fatigue, an impaired quality of life and can lead to severe disability.

It is a progressive neurological condition that destroys cells in the part of the brain that controls movement.

Sufferers are known to have diminished supplies of dopamine because nerve cells that make it have died.

There is currently no cure and no way of stopping the progression of the disease, but hundreds of scientific trials are underway to try and change that.

The disease claimed the life of boxing legend Muhammad Ali in 2016.