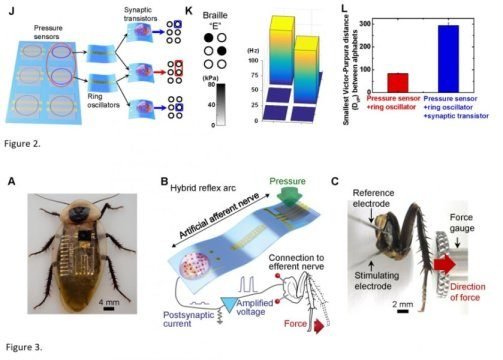 Stanford and Seoul National University researchers have developed an artificial sensory nerve system that can activate the twitch reflex in a cockroach and identify letters in the Braille alphabet.

The work, reported May 31 in Science, is a step toward creating artificial skin for prosthetic limbs, to restore sensation to amputees and, perhaps, one day give robots some type of reflex capability.

“We take skin for granted but it’s a complex sensing, signaling and decision-making system,” said Zhenan Bao, a professor of chemical engineering and one of the senior authors. “This artificial sensory nerve system is a step toward making skin-like sensory neural networks for all sorts of applications.”

This milestone is part of Bao’s quest to mimic how skin can stretch, repair itself and, most remarkably, act like a smart sensory network that knows not only how to transmit pleasant sensations to the brain, but also when to order the muscles to react reflexively to make prompt decisions.

The new Science paper describes how the researchers constructed an artificial sensory nerve circuit that could be embedded in a future skin-like covering for neuro-prosthetic devices and soft robotics. This rudimentary artificial nerve circuit integrates three previously described components.

Sensory signals from these components stimulate the third component, an artificial synaptic transistor modeled after human synapses. The synaptic transistor is the brainchild of Tae-Woo Lee of Seoul National University, who spent his sabbatical year in Bao’s Stanford lab to initiate the collaborative work.

“Biological synapses can relay signals, and also store information to make simple decisions,” said Lee, who was a second senior author on the paper. “The synaptic transistor performs these functions in the artificial nerve circuit.”

Lee used a knee reflex as an example of how more-advanced artificial nerve circuits might one day be part of an artificial skin that would give prosthetic devices or robots both senses and reflexes.

In humans, when a sudden tap causes the knee muscles to stretch, certain sensors in those muscles send an impulse through a neuron. The neuron in turn sends a series of signals to the relevant synapses. The synaptic network recognizes the pattern of the sudden stretch and emits two signals simultaneously, one causing the knee muscles to contract reflexively and a second, less urgent signal to register the sensation in the brain.

The new work has a long way to go before it reaches that level of complexity. But in the Science paper, the group describes how the electronic neuron delivered signals to the synaptic transistor, which was engineered in such a way that it learned to recognize and react to sensory inputs based on the intensity and frequency of low-power signals, just like a biological synapse.

The group members tested the ability of the system to both generate reflexes and sense touch.

In one test they hooked up their artificial nerve to a cockroach leg and applied tiny increments of pressure to their touch sensor. The electronic neuron converted the sensor signal into digital signals and relayed them through the synaptic transistor, causing the leg to twitch more or less vigorously as the pressure on the touch sensor increased or decreased.

Bao’s graduate students Yeongin Kim and Alex Chortos, plus Wentao Xu, a researcher from Lee’s own lab, were also central to integrating the components into the functional artificial sensory nervous system.

The researchers say artificial nerve technology remains in its infancy. For instance, creating artificial skin coverings for prosthetic devices will require new devices to detect heat and other sensations, the ability to embed them into flexible circuits and then a way to interface all of this to the brain.

The group also hopes to create low-power, artificial sensor nets to cover robots, the idea being to make them more agile by providing some of the same feedback that humans derive from their skin.