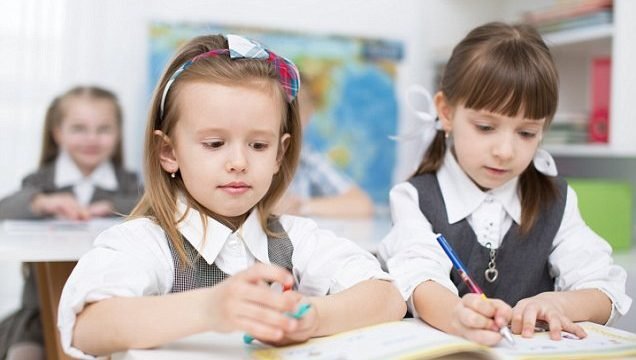 Air pollution is worse inside classrooms and nurseries than city streets due to exhaust fumes getting trapped indoors, study finds

Air inside classrooms is more polluted than outside, new research suggests.

Primary schools and nurseries in London contain levels of fine air particles that are ‘consistently higher than outdoors’ and breach World Health Organization guidelines, a study, which was commissioned by London Mayor Sadiq Khan, found.

Pollution is thought to be worse inside than out due to air being less able to circulate and getting trapped.

Fine air particles, which weigh as little as 0.0025mg, are given out in vehicle exhaust fumes and, when breathed in, become deposited in the lungs where they enter the circulation.

Children are more vulnerable to pollution due to their less developed lungs and breathing in more air per kilogram of body weight.

The researchers, from the University of Cambridge, wrote: ‘The exposure of children’s developing lungs to air pollution can result in reduced lung function that persists through to adulthood, increasing susceptibility to respiratory and cardiovascular diseases.’ 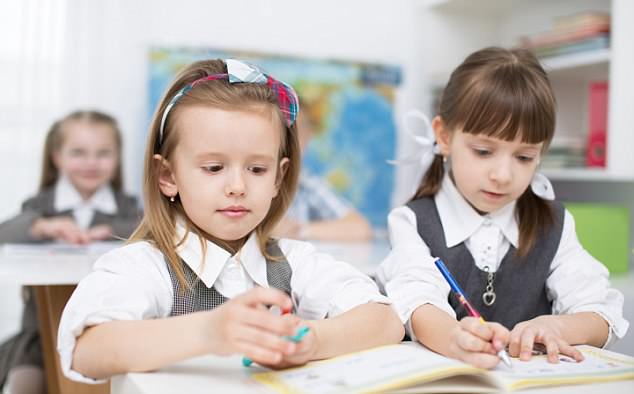 Air inside classrooms is more polluted than outside, new research suggests (stock)

Young children who grow up exposed to air pollution are more likely to develop asthma, research suggested in December 2017.

A mix of dust, sand and non-exhaust tailpipe emissions, known as coarse particulate matter, increases youngsters under 11’s risk of the lung condition by 1.3 per cent, a study by The Johns Hopkins University found.

Air pollution also raises their risk of visiting the emergency room due to their asthma by 3.3 per cent and being hospitalised with the condition by 4.5 per cent, the research adds.

Young children are thought to be more at risk due to them typically spending a lot of time outdoors and being vulnerable to air pollution due to their immature lungs, according to the researchers.

Around 7.1 million children in the US have asthma, making it the most common chronic childhood illness.

Approximately 1.1 million youngsters are affected in the UK.

The researchers analysed the asthma diagnoses and treatment data of 7,810,025 children aged between five and 20 years old living in 34 states between 2009 and 2010.

They estimated levels of coarse particulate matter in each zip code using information from the EPA’s Air Quality System database from 2009 to 2010.

The researchers, which also included scientists from King’s College London, analysed five primary schools and a nursery in London, as well as evaluating previous studies on the effects of air pollution in children.

They wrote: ‘Children living or attending schools near high traffic density roads were exposed to higher levels of motor vehicle exhaust gases, and had higher incidence and prevalence of childhood asthma and wheeze’.

For nitrogen dioxide (NO2), which is strongly related to asthma attacks and is released from vehicle exhaust fumes, outdoor sources account for 84 per cent of the variation between classrooms.

Air pollution levels in classrooms depend on factors such as building design and maintenance levels.

‘Air pollution is a national-health crisis’

Mr Khan, who has launched a £1-million fund to protect pupils from toxic air, said: ‘Air pollution is a national-health crisis that is putting the health of children at risk.

‘As mayor, I’ve moved fast in London to implement the most ambitious plans to tackle air pollution of any major city in the world.

‘This includes cleaning up our bus and taxi fleets, bringing forward the introduction of the world’s first ultra-low emission zone and introducing the toxicity charge – T-Charge – for the oldest polluting vehicles in central London.

‘But I can’t do this alone. The Government must step up and act with more urgency if we are going to tackle London’s filthy air once and for all.’ ‘Nothing is more precious than our children’s health’

Friends of the Earth spokesman Oliver Hayes added: ‘Schools are supposed to be places that keep children safe, so news that deadly diesel fumes are drifting into classrooms is deeply worrying.

‘If we’re serious about protecting the health of our children, the Government should act swiftly to encourage people out of their cars by massively investing in affordable, green public transport, walking and cycling – as well as getting much tougher on car makers who continue to peddle polluting vehicles.’

Alison Cook, director of policy at the British Lung Foundation, said: ‘We know that air pollution can stunt the growth of children’s lungs, and is linked to asthma and chronic chest problems later in life.

‘Nothing is more precious than our children’s health, and we’re pleased to see that cleaning up the toxic air around schools is a priority for the Mayor of London.’

‘The Government must match this commitment by taking action to protect all of our lung health, including new and safer legal limits for air pollution.’