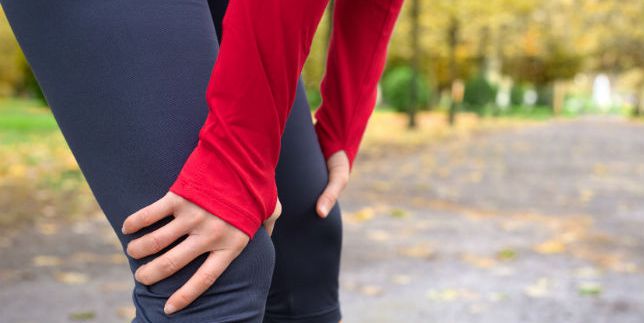 You’re supposed to be a little sore after a workout; after all, part of the appeal of exercise is that hurts-so-good feeling after you really beast it out. But what about when you wake up two days after you work out, and your muscles still feel like:

Almost everyone who’s worked out has at some point experience that second-day soreness—I know I have, especially after I really push myself during a race or hit the weights after a long time out of the gym. That feeling is so common, it actually has its own name: delayed onset muscle soreness (DOMS).

What Is Delayed Onset Muscle Soreness?

To understand muscle soreness, you have to understand how how your muscles grow. “The very easy explanation is that you break muscle fibers down during exercise, and then your body builds them back up while healing, causing inflammation” says says Pete McCall, an exercise physiologist and ACE-certified personal trainer. “Soreness is a response to damaged individual muscle fibers.”

While your workout is to blame for the inflammation, a healing process called the inflammatory response cascade is what’s really causing your muscle pain 48 hours after your sweat session, explains Jordan Metzl, M.D., an exercise physician and author of The Exercise Cure.

The response is a series of events that happens during a period of four to five days, says Metzl. On day one, your body responds to the injured area by releasing hormones called cytokines. These hormones direct cells to go heal your inflamed muscles. At the same time, prostaglandins, hormones that also affect how cells respond to injury, send blood to the area to heal it.

This process is slow for the first 24 hours. However, on dreaded day two, the flood of cells to the area of inflammation, a.k.a. your muscles, reaches its peak and continues the healing response, he says. This means you’re going to struggle getting out of bed.

There’s no one specific type of workout that can cause muscle soreness; it’s all about your intensity and your typical workout routine. “Anytime you’re challenging the muscle to do more mechanical work, you’re going to have a higher amount of DOMS,” says McCall. So, if you’re doing a strength training workout using heavier weights than you’re used to, or if you do sprints at a faster pace than normal, you’re going to get muscle soreness, he explains.

That said, you are more likely to experience DOMS after eccentric muscle training—which is when you lengthen your muscles while contracting them, like during the downward part of a bicep curl. That’s because this type of workout causes more micro-trauma, or tiny tears in your muscle fibers, than any other type of training. And your body then needs to repair and build that muscle, says Greg Justice, an exercise physiologist and author of Mind Over Fatter.

On a more chemical level, you’re also increasing the acidity of your muscles, so they have “less oxygen and will be more sensitive to that soreness,” says McCall.

But that’s not to be confused with lactic acid, says Metz. “We used to think that lactic acid was to blame for DOMS before we understood cellular biology as much,” he says. Now it’s clear that lactic acid only affects short-term exercise tolerance—or how long you can endure a tough workout—and isn’t a factor in delayed muscle soreness.

While sometimes DOMS is unavoidable, there are some things you can do to get over it: First, you want to hydrate, hydrate, hydrate. “The more water you have in your body, the more you’re going to flush those hydrogen ions out of your system,” says McCall. And if you have access to a sauna or steam room, get yourself into the heat to help improve your body’s circulation. “That circulation is going to remove the hydrogen ions and bring new, oxygenated blood into your tissues.”

Second, you want to do some active recovery. “The more you sweat, get your heart rate up, and elevate your circulation, the more you’re going to help cycle out that old blood and get in the new,” says McCall.

Is Delayed Onset Muscle Soreness Something to Worry About?

The good part of your I-can’t-move feeling is that means that you did “a lot of great work and are in the process of building stronger muscles,” says Metzl. To some degree, you want to feel sore from your workout the next day. But you don’t want to have so much muscle pain that you can’t get out of bed. “If doctors use a pain scale of 1 to 10, I would classify DOMS as anything above a seven or eight, and that’s probably something you want to avoid,” says McCall.

And pay attention to the type of muscle pain you’re experiencing: DOMS feels like general soreness throughout the muscle, but if you feel a sharp or localized pain and high-level discomfort, that could mean you damaged the muscle or some connective tissue, says McCall. If that’s the case, see a doctor ASAP.

There’s one other thing the be aware of: If the soreness isn’t lessening after two to three days or if you start to have discolored urine, you should definitely talk to your doctor. It’s possible that you could have rhabdomyolysis, which is basically DOMS gone wild, says Metzl, and is a serious and dangerous condition.