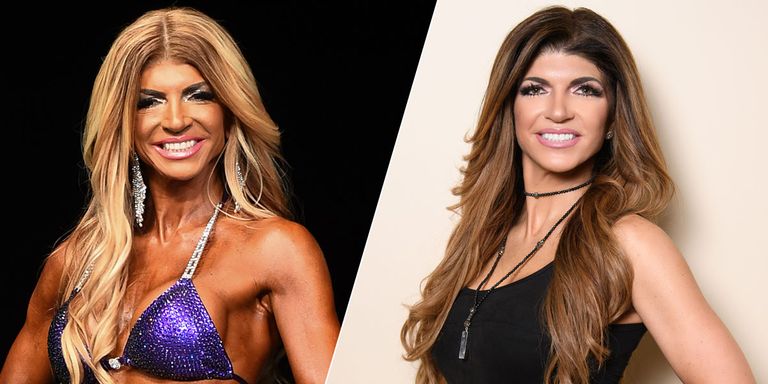 If you’re a Real Housewives fan, you may remember Teresa Giudice, now 46, as the queen of onscreen freak-outs. But now, it’s my turn to freak out—because she is officially JACKED.

On Saturday, Teresa pulled out all the big guns at the NPC South Jersey Bodybuilding Championships, and her extremely fit physique earned her third place at her first-ever bodybuilding competition.

According to People, a source said the 46-year-old Real Housewives of New Jersey star trained for months to compete in the 40-plus bikini division.

“She has been training for this bodybuilding competition since December,” the unnamed source said. “She wanted a new challenge and pushed herself to the extreme. Right now she is in the best shape of her life.”

“She has lost a bunch of weight,” the source continued, adding that Teresa is “even more fit than when she got home [from prison].”

And you can really see those muscle gains when you compare her bodybuilding photos to snaps of her already-fit figure in December and January, when she started training:

In 2015, Teresa served an 11-month prison sentence for fraud (her husband Joe Giudice, is currently serving out his 41-month sentence for bankruptcy fraud, and has reportedly lost 45 pounds, according to People).

After her time in jail, Teresa told Women’s Health that yoga helped her gain control of her impulsivity. “I wish I would have done this years ago,” she shared. “I love it so much that I want to get certified in it. I have, I would say, a few more months to go. I’m just taking my time, because I have four daughters.”

However, it seems that the busy mom has also picked up weightlifting as part of her fitness routine. On Instagram, Teresa has shared several videos of her training regimen.

Two-way rear delt pulls on the cables. Keep your core tight and control the movement through out the entire exercise. #shoulders #lifestyle #getfit @the1tlz

Because the cast of Real Housewives of New Jersey has been filming season nine, according to Andy Cohen’s recent reveal on Watch What Happens Live! and Us Weekly, Teresa’s training and competition may be featured on the show.

Teresa’s brother, Joe Gorga, who regularly appears on the reality series, was there Saturday to show his support, and posted a photo of them flexing together.

Proud of my sister for her hard work and dedication!! #gorgablood Photo by @dkotinsky

“Proud of my sister for her hard work and dedication!!” he captioned a photo of him flexing his arms with Teresa. Looks like big guns run in the fam.

From: Women's Health US