It didn’t take long for Saquon Barkley to become one of the best running backs in the NFL. The former second overall draft pick and Penn State standout is only just beginning the second season of his professional career, but it’d be hard to argue he’s anything but the premiere talent at his position. In a YouTube video, the Pro Bowler takes fans and viewers inside his offseason workout, showing the intense series of exercises he put himself through to get ready for the grueling nature of an NFL season.

The video shows some of the ways that Barkley works on his speed and strength to put together his signature all-around game, as he’s known as a lightening-quick but also tremendously powerful back. Barkley’s legs get much of the attention, but this video, posted by the New York Giants, shows him going through a full gauntlet of work, blasting his core, arms, and honing his overall athleticism as well.

And while the season hasn’t started off too hot for Barkley’s Giants (they got beat down in Week 1 by the Cowboys, and lost handily to the Bills in Week 2), the work is still paying off for the superstar RB—he’s been making plays all over the field, much to the delight of fantasy players everywhere.

“The best ability is durability,” Barkley says at the end of the video. With the news that’s come already this week—Steelers QB Ben Roethlisberger is out for the season and Saints QB Drew Brees will miss six weeks—that’s more evident than ever, and something that Barkley clearly has worked at over the years.

While Barkley began his college career at missing a pair of games during his freshman season at Penn State, he hasn’t missed a game since. Here, Men’s Health fitness director Ebenezer Samuel, C.S.C.S. gives five tips and takeaways from Barkley’s video that show how one of the NFL’s best-known physiques stays sharp.

Eb says: For as much as the barbell bench is a gold-standard lift, both for NFL players (it’s a Scouting Combine test) and in most gyms, note that Saquon never once does that move in this video. Instead, he does other press variations, pressing with dumbbells and doing several variations of pushups. Take a cue from Barkley and limit how often you attack barbell benching in your workouts. Barkley’s plenty strong, but he’s skipping that glamour lift in favor of dumbbell incline work and several variations of bodyweight pushups.

Eb says: If you’ve gotten to the point where chinups and pullups seem easy, this is an excellent way to level them up. You could also add a weight belt or vest to up the challenge, but bands lend something unique to the chinup: They’re at their most resistive when you’re at your highest. That helps you learn to really squeeze your back muscles. Also note that Barkley is doing chinups instead of pullups; especially if you have shoulder issues, chinups, which shift your shoulders closer to external rotation, may be easier. 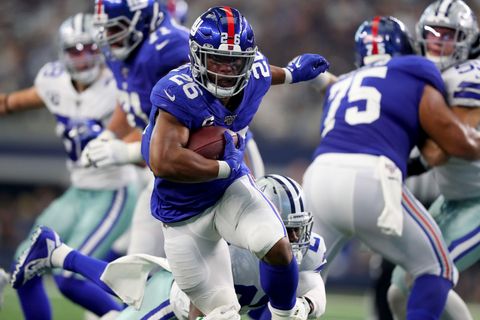 Eb says: At this point, Barkley is doing bottoms-up kettlebell shoulder press pulses with banded resistance. This isn’t a move you’ll see, well, almost anywhere, but it’s all about shoulder and wrist stability. The upside-down kettlebell position forces Barkley to focus on keeping his forearm vertical and applying as much force as possible going directly upwards. Meanwhile, that light band forces his back and rotator cuff muscles to turn on to maintain that position. Use a light resistance band and a light kettlebell if you try this and think of doing it for time (30 seconds to a side) instead of reps. It’s a good drill to help bulletproof your shoulders.

Eb says: Here, Barkley does Swiss ball rollouts to pike-ups. This is a great and move for both core and shoulder stability. When you pike upwards, you’ll attack your abs, build shoulder strength and mobility. Rolling out will hit your abs and lower back muscles, and when you press all the way back, it’ll again help train your shoulder stability. This is a good ab move to finish out a workout, or a good way to warm up shoulders and core. And it’s more challenging than you think.

Eb says: This is an easy way to progress the standard inverted row if it’s gotten too easy, although note that Barkley’s training partner stays close to him the entire time to control the weight. Also note that Barkley isn’t driving his chest to a bar or driving up super-high. It’s a reminder that you don’t need to drive chest to bar on inverted rows. If you can, great, but it’s not a requirement.