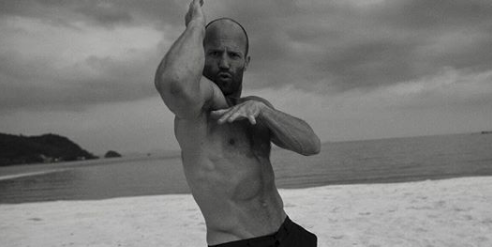 Jason Statham is one of the biggest action stars in the world, and he is serious about his fitness — which is abundantly clear if you’ve ever scrolled through his Instagram feed.

At first glance, Statham’s social media presence isn’t much different than that of other stars. He’s got a mix of posts promoting his projects, shots of his wife — actress and model Rosie Huntington-Whiteley — and pics documenting the perks of a Hollywood lifestyle, like super-fast luxury cars.

But there’s one distinct feature of Statham’s account you’ll be hard pressed to find anywhere else. The British brawler is a master martial artist and former world-class diver, and there’s a continuing series of photos that show off his athletic exploits. That’s not rare in itself — Statham’s Fast & Furious costar, The Rock, uses his Instagram as a glorified workout diary — but what is unique is how Statham’s workout posts are framed. There’s typically no caption to give any indication about what he’s doing or why the picture is worth posting, and the photos are almost always filtered black and white. He tends to be shirtless, the lens focusing on his ripped torso. He posts seemingly at random, dropping three pics in one day sometimes, then going silent for months.

To top off the ambiguous, dramatic posts, Statham’s account currently doesn’t follow any other pages. He’s clearly not on the platform to take part in the social media fitness community, or any type of community, for that matter. He’s there to show all of his 16.6 million followers that he’s more than willing to take his shirt off, strike a pose, and kick some serious ass for his own puposes.

We salute you, Instagram Statham. Clearly, there is no real strategy here — when you get a good pic, you post it in the way you think makes it look the absolute coolest, followers and platform conventions be damned. Here are 11 of his best black and white workout posts, so you can appreciate the social media mystery that is Jason Statham.

Here’s Statham shirtless on a beach, practicing martial arts. Why? Who cares!

This unexplained photo of Statham blocking an invisible strike has over 1.7 million likes. Let that sink in.

Is this a move, or just part of the flow?

Statham breaks protocol here with a sepia tone filter and provides some comment for the photo, citing the photographer and Men’s Health UK, which was responsible for the shoot. But he still doesn’t share what he’s doing (presumably capoeira, a Brazilian martial art). Whatever. It still looks cool!

Statham showed off his strength and flexibility in a black and white photoshoot for Men’s Health Australia with rings and bars, but it’s still not entirely clear why the photos got the Insta treatment.

Rings are a tough workout, so it’s understandable why this pic made the cut.

Statham’s photos typically show him working out with only his bodyweight, so the plates on the sled are a rare interloper in his Instagram.

Statham doesn’t typically show off any traditional cardio moves, so the rower is also a rare sight.

@therock sent me over one of his ankle weights to see if I could move it. Respect to you brother!

@therock sent me over one of his ankle weights to see if I could move it. Respect to you brother!

To cap off the bars and rings series, Statham graced his followers with the only black and white workout photo that fits Instagram convention. He tags The Rock and makes a funny self-aware joke that gives his audience the impression that movie stars hang out with their buddies just like the rest of us.

But the post is an anomaly. Only the power of The Rock could break Statham’s account from its idiosyncrasy.

Why is Statham menacing us with a knife and wetsuit? Is this a movie still? Is he in trouble? We might never know.

Of course, there has to be an ab shot in here. Nothing but pure, unadulterated British beef, free of any context or explanation.