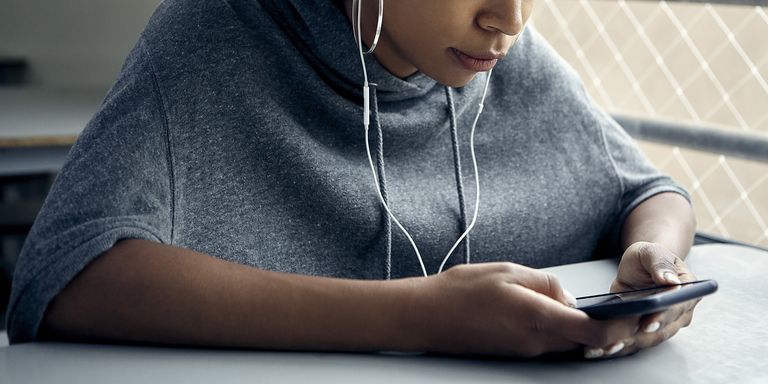 The Crisis Text Line (741741) is a 24/7 New York-based nonprofit organization that connects people in need with a counselor via text message. In the weekend that followed the suicides of Kate Spade and Anthony Bourdain, it received 116 percent more texts than the previous weekend, mostly from people citing pain and fear, according to Crisis Text Line data.

“There’s no hotline that magically solves everyone’s problems, but being a part of the solution, no matter how much you move the needle, feels like a step in the right direction,” says text crisis counselor coach Hira Raja, 28, who began volunteering in 2015 and has since joined the organization as a full-time employee.

Here’s what you need to know about the Crisis Text Line:

1. You can text about absolutely any issue.

“There’s no wrong way to use the service,” Raja says. Whether you’re personally struggling or know someone who is and want to help him or her — and whether the issue involves suicidal thoughts, job stress, or a breakup, crisis counselors are there to listen.

“One of the toughest things to do is reach out and tell someone you need help — that initial text message takes a lot of courage,” Raja says. “If you’re at a loss for words and need help, a ‘hey’ is enough to start the conversation. No matter what you say, your message will come through.”

3. Texters aren’t asked to share their names or any identifying information.

“No information is collected unless you explicitly tell us,” Raja says, meaning people never have to share their name, age, or gender. You may, however, be asked for feedback on your conversation via a survey sent by text.

4. You never have to pick up the phone and speak to a human — unless you want to.

“Texting is a form of communication that people know and trust, and it’s unique since it’s anonymous and can be done privately in any situation,” Raja says of the text-only service. “If someone wants to get on the phone, we can always provide a referral.”

Volunteer crisis counselors, who must be 18 or older, are vetted via background check and two references. They’re also trained by the organization to practice empathy and active listening in a six-week, 30-hour program. Because each texter’s issue is unique, crisis counselors don’t dole out pre-rehearsed lines: Instead, they introduce themselves by name, then craft original responses using validating statements like, “I can hear you’re in pain,” and open-ended questions designed to empower the person in need.

6. Crisis counselors are taught to empathize with texters, rather than interrogate them.

“A statement like, ‘Hey, I’m here for you,’ can be just as effective as a question about what’s wrong,” Raja says. Counselors only pry if someone seems to be in danger, and they rarely offer advice: Because the goal is to empower individuals to suss their own solutions, volunteers prompt the texter to identify options and weigh pros and cons.

To that end, counselors are trained to avoid conversations about themselves — even if they’ve been in a situation similar to what the texter is describing. “It’s better to let them tell you what they’re feeling, and tell them it takes courage for a person to express their deepest feelings despite the fear of judgment and retaliation,” Raja says. “It’s important for them to hear that from someone who genuinely cares.”

7. The Crisis Text Line uses an algorithm to assess the severity of a crisis.

Because text-based counselors can’t see a texter’s body language or hear the tone of his or her voice, it can be tough to tell the severity of a person’s crisis. It’s why the organization’s software has an algorithm that picks up specific terms and prioritizes texts accordingly so a counselor can respond ASAP. Otherwise, the typical wait time for an answer can be up to five minutes, with no more than two to four minutes between responses.

8. Texters can end the conversation at any point, but counselors never will cut them off.

Depending on a conversation’s pace, the average Crisis Text Line session lasts between 45 and 60 minutes, according to Raja. If you go idle or ghost your counselor and don’t appear to be in immediate danger, he or she may follow up several times before letting you know they’re moving on to another conversation. If you reach out after that, your text will go back into the queue and be picked up by a different counselor.

9. The organization will dispatch emergency services in some situations.

If someone expresses a wish to take his or her life, has a plan and the ability to carry it out, and shares a timeframe, a supervisor may use the texter’s area code to locate him or her and alert local emergency services to take action.

Crisis texting is a short-term service designed to bring an individual from a “hot moment” to a “cool calm” by talking things out and ensuring they are safe, Raja says. “This can lead to a referral to a local resource, but not everyone wants the same thing from their conversation — sometimes, they just need to talk to someone and vent.”

11. Crisis text counseling can provide enormous relief during and after conversations.

“There have been moments where I’ll text with someone dealing with anxiety and pressure, and I’ve said, ‘OK, so what can you do now in this moment to help you relieve some of this?’ to the point where they can see a solution,” Raja says, noting that texters can re-read the conversation at a later date for additional comfort. “Seeing a shift in a person’s mood and knowing they are feeling better can be a really rewarding experience.”