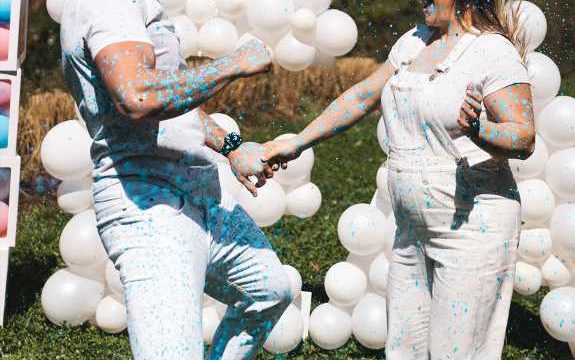 Shawn Johnson East and Andrew East revealed the sex of their baby on the way Friday with a fun-filled (and messy!) paint celebration. The pair, who tied the knot in April 2016, are also parents to 17-month-old daughter Drew Hazel.

"We are so excited to be welcoming a boy to our growing family and for Drew to have a little baby brother," the pair tells PEOPLE, sharing exclusive photos from the sex reveal. "It will be a whole new experience and we're so excited to start this next chapter!"

The Olympic gold medalist announced her pregnancy news in January, sharing a photo of herself kissing her husband while resting her hands on her baby bump. "Here we go again," she captioned the Instagram post at the time, which also included a family snap with Drew.

In a YouTube video at the time, the couple celebrated the exciting moment, revealing that the due date is for summer 2021 — and they both guessed the sex of the baby as a boy. Who's Due Next? Celebs Who Are Expecting

Later in January, the pregnant athlete revealed that she tested positive for COVID-19. She soon recovered from the "pretty mild" case of the coronavirus, eventually returning to her normal routines.

Back in October the couple opened up about their plans for the future, and explained why they were hesitant to share that they were definitively "trying" for another baby.

"I mentally don't want to say, 'We're trying,' because I don't want to put myself in the position where we get a year down the road and it's like, 'Oh, we've been trying for a year and it hasn't happened,' " the retired gymnast explained during an episode of Jamie Otis and Doug Hehner's Hot Marriage Cool Parents podcast. She went on to share that she still had complicated feelings about her past miscarriage and didn't want to set herself up for disappointment.

Johnson East and her husband previously revealed that she had suffered a miscarriage in October 2017, before going on to announce they were expecting again in April 2019. Their daughter was born the following October.

"[After a loss,] it is [scary]," Johnson East said on the podcast episode. "And I feel like it never gets easier, which is funny. It's like, 'Oh, once I have our kid, it'll be fine and I won't be worrying.' But then you have a child and [it's] anxiety all day, every day. [You always think] something's gonna go wrong. It never gets easier but it's always worth it, obviously."

Earlier this month, the East family unveiled their new Hidden Heart socks as part of their Teddy & Bear line, knitted with a heart on the cuff to drive awareness to pregnancy complications and loss, and as a reminder to mothers and families who suffer loss that they aren't alone. Teddy & Bear kicked off the Hidden Heart launch by donating $15,000 to March of Dimes.