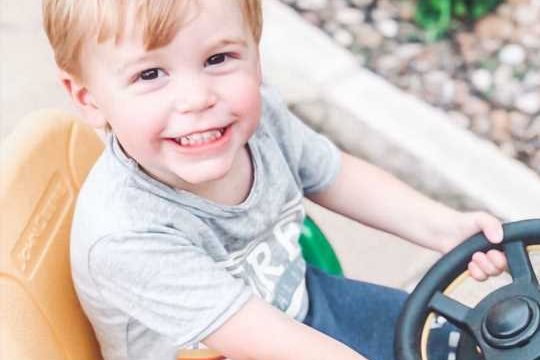 On Saturday, the country singer’s wife Amber Smith revealed on Instagram that they had decided to donate River’s organs — and his donation saved the life of two adults.

The couple’s 3-year-old son tragically died last month in a drowning accident at home. That same day, the country singer, 39, shared the “unthinkable” news on Twitter and Instagram, revealing “despite doctor’s best efforts, he was unable to be revived.” River was laid to rest on June 11.

Amber began her post by explaining that she’d always wanted to be an organ donor “if anything were to ever happen to me,” but “never in a million years” did she believe she would be making that decision for River.

“When three different neuro specialists told us that River had 0% chance of brain recovery … after shock and reality set in, I thought, how can we bury our sweet baby and not try to help others?” she wrote. “His body is perfect, his organs are perfect, we had to do something. There are so many people waiting for an organ to save their lives.”

Once they had decided they wanted River’s organs to be donated, the doctors explained that it would be “quite a process.”

Amber explained that, because River was a small child, his “organs had to be measured physically, not just by X-ray,” recalling how she “spent the night laying in bed with him, crying and talking to him” while the doctors “kept running tests and taking blood.”

Want all the latest pregnancy and birth announcements, plus more celebrity parenting news? Click here to get those and more in the PEOPLE Parents newsletter.

“The next morning family and staff lined the hall for the ‘walk of honor,’ ” she wrote. “We told them River liked to go fast, so to honor him, they pushed him down that hall faster than they had ever pushed anyone. Granger and I held each other and cried.”

“We got the letter that our tiny, red-headed hero gave life to 2 adults,” Amber continued. “A 49-year-old woman and a 53-year-old man. I cried when we opened it. Cried out of sadness & cried out of love.”

“I’m so proud to be River’s mama and I’m so grateful to God that he gave him to us for those incredible three years. I pray these two recipients live healthy, joy filled, full throttle lives just like Riv,” she added. “It was one of the hardest, yet easiest, decisions we’ve ever made.”

Amber also directed her followers to organdonor.gov for more information about organ donation.

Last week, Amber shared a tribute to her late son, noticing that many photos of River show the boy surrounded by a glowing “light.”

“I couldn’t sleep last night so I was going through photos of River. I noticed so many with this light around him that I never really took notice of before,” she began in the caption of a photo gallery featuring her son.

“We always used to ask him what he wanted to be when he grew up. He never said a fireman, or police man or doctor. He always said ‘when I get bigger I reach the light,’” Amber continued.

Last month, Granger debuted a new tattoo while making his emotional return to the stage following his son’s death at the Country LakeShake music festival in Chicago. The tattoo consists of the name “River” written in large black script across the country musician’s right forearm.

“I can rest assured knowing that River’s assignment on earth was always intended for 1116 days and not only did he live it to the fullest, but he lived it loved by so many, including a mother, father, sister and brother who held nothing back and have no regrets on how much he felt that love,” Granger wrote in an emotional Instagram post in June.

“We should all be so blessed to be able to live like Riv,” he added.