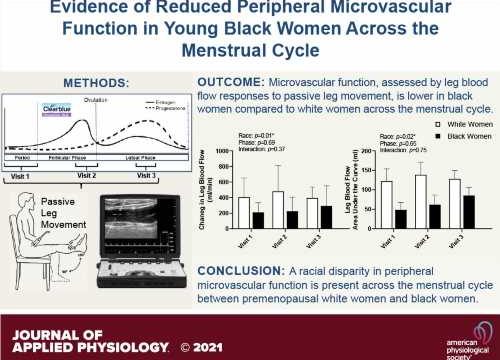 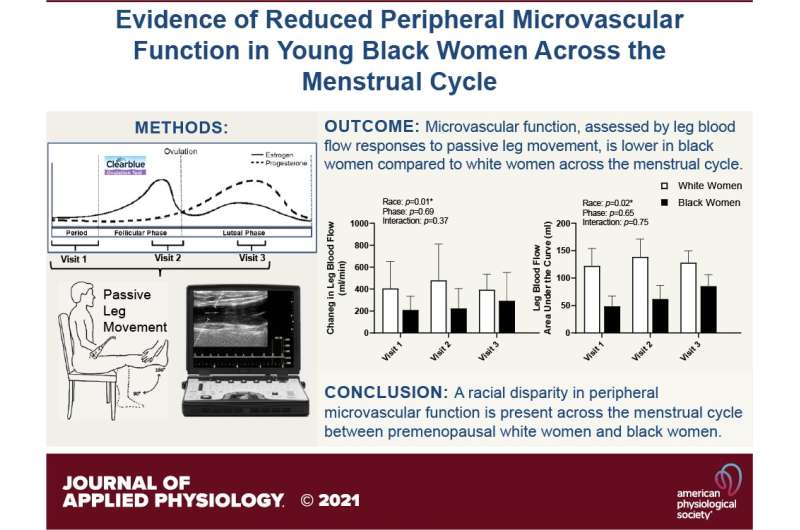 Microvascular function, which is the measurement of how healthy the arteries are throughout a person’s body, is lower in Black women compared to white women throughout the menstrual cycle, according to researchers at the University of Delaware. This suggests that regardless of when participants were tested during their cycle, Black women had a lower blood flow response, indicating less dilation of the small blood vessels in their legs. Researchers believe this is likely one of the contributing factors to increased risk of cardiovascular disease (CVD) in Black women, and noted this was detected even in young, otherwise healthy women. The study is published ahead of print in the Journal of Applied Physiology and has been chosen as an APSselect article for January.

Researchers additionally found in a smaller subset of study participants that the concentration of the sex hormone estrogen was lower in Black women throughout the duration of the menstrual cycle. Physiologists believe this is partly to blame for the lower microvascular function they observed in Black women. They also point out that despite the higher CVD risk and incidence, Black women are one of the most understudied groups, highlighting the importance of more studies among this population.

According to the American Heart Association:

Researchers hope their findings begin to lay a foundation for improved human health. “These findings are important because they guide us to a more complete understanding of vascular health in young Black and white women,” said Melissa A. Witman, Ph.D., of the University of Delaware, the senior author of the study. “We collectively need to work toward decreasing the alarming racial disparity in CVD, and our study is helping characterize potential mechanisms early in life when perhaps we have an opportunity to ward off or limit future CVD burden.”