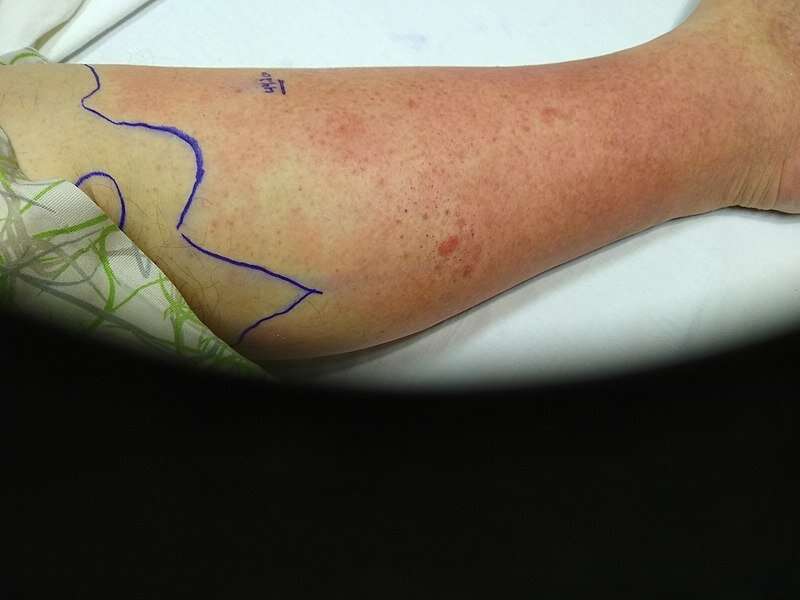 Your skin usually deflects any bacteria it encounters, protecting you from all sorts of infections. However, when you get a bug bite or a rash, some of that bacteria can sneak in, potentially causing serious consequences.

For example, you might develop cellulitis—it’s the most common infection that occurs when bacteria breach the skin barrier. An estimated 1 in 503 people, or 0.2%, of the population get this painful red rash each year. It may happen after a bite or cut or if your skin gets so dry that it cracks and bleeds.

When the infection happens, the area becomes painful, swollen, firm and warm. These symptoms can develop quickly, sometimes in less than 24 hours. It usually affects the feet or legs, but it can affect any part of the body—even your face. You might see red streaks or blisters in the afflicted area, and the skin can become dimply and, above all, very tender.

Most people who get cellulitis are middle-aged or older adults, but kids and younger adults can get it too. Aside from age and bad luck, risk factors include being overweight or having an immune system weakened from diabetes, cancer or HIV/AIDS. Circulation problems, such as long-standing leg swelling, also make people susceptible.

A variety of different bacteria can cause cellulitis. One of the most common culprits is Staphylococcus aureus—often called “staph.” Another common one is the same bacteria that is responsible for strep throat: Group A Streptococcus pyogenes.

Cellulitis is an infection of the deeper layers of the skin, and you can’t catch it from someone else.

If you get it, your physician will prescribe antibiotics and the condition should improve within one or two days. However, the redness may take up to four weeks to fully go away. Do not be alarmed if your skin turns slightly scaly, flaky or wrinkly as the inflammation heals.

Seek emergency care if the affected area doesn’t seem to be clearing up within three days, you run a fever of over 100.4 degrees Fahrenheit, you develop other flu-like symptoms, the redness and pain rapidly worsen or an abscess forms.

To prevent cellulitis, protect your skin by wearing appropriate clothing. You should also wash skin immediately after an injury with soap and water. If you tend to have dry skin, use moisturizers to prevent any cracking.

Left untreated, it can spread to your lymph nodes or blood, causing a life-threatening condition called sepsis. Sepsis can affect and even shut down the internal organs, which can be fatal. The bacteria can also spread to the bones or the heart once they enter the blood, with possibly long-term consequences.

Doctors and other medical practitioners can diagnose cellulitis by examining your skin. In some cases, doctors may culture or sample the bacteria from the skin or blood to find the culprit. Occasionally, there can be concern that it will form deeper pockets of infection. In those cases a doctor may order a CT scan or ultrasound test.

Is it cellulitis or something else?

Just as there’s a danger of not catching cellulitis before it causes more serious problems, there is also a risk that other diseases will be mistaken for cellulitis. This confusion is something we frequently see as dermatologists.

Stasis dermatitis, which is caused by swelling of the legs from leaky vein valves, is the most common condition that looks like cellulitis. Fortunately, the two can typically be distinguished, as stasis dermatitis tends to affect both legs. Cellulitis almost always only affects one leg or arm at a time.